Being born in Liverpool and a photographer this is an ideal book for me to review.

It is the latest title inj Amberley’s postcard collection. It includes 176 postcards, the majority in colour. They date from the late Nineteenth Century to the late 1940’s.

I was born after this time, but a lot of the images evoke memories., particularly of my childhood spent in Liverpool.

Among my favourite postcards in the book are the Pier Head landing stage shown at nightime, located near to the Cunard and Dock Office buildings.

Regular users of the landing stage were the Mersey ferries. Benedictine monks ran the first regular ferry from Birkenhead to Liverpool. 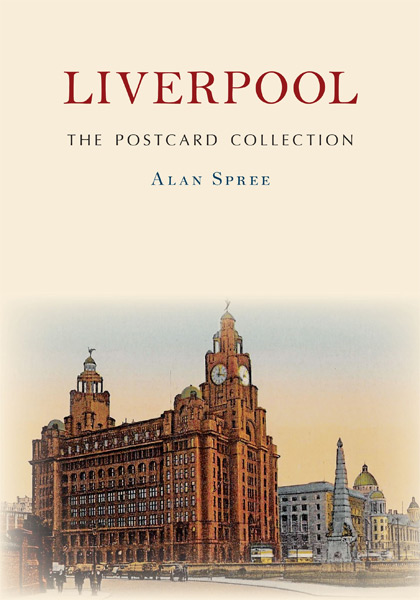 Being an avid nature lover the images of Sefton Park, Princes Park and Calderstones Park particularly appealed to me.

Sefton Park was opened in 1872. As the book describes ‘The park design is based on circular, oval and marginal footpaths framing the green spaces, with two natural watercourses flowing into the seven acre man made lake.’

Calderstones Park is illustrated by an image of a horse drawn carriage outside the main entrance.

The postcard of Liverpool Anglican Cathedral recalled memories for me of seeing German group Tangerine Dream, one of my favourite bands, playing there in 1974 in a venue with superb acoustics.

I am also a great admirer of windmills, with the book including two images of the old mill in Wavertree, which sadly is no longer there.
First built in 1452, it sadly was wrecked in a storm in 1898 and demolished in 1916.

The author of the book is Alan Spree, the great grandson of the postcard publisher John Henry Spree.