This is the latest title in an enterprising new series by Amberley Publishing, an alphabetical journey through the history of St. Helens, located in Merseyside.

The author Sue Gerrard was born in St Helens and lived there most of her life, so understandably she has an in-depth understanding of the different aspects of the town, aided by having worked there as a local journalist and a lecturer at the University Centre, St Helens. Gerrard has written several local history books, including ‘Secret St Helens.’

St Helens originated as four townships, Eccleston, Parr, Sutton and Windle. The Industrial Revolution led to it becoming a centre of industries, for example, glassmaking, coal mining and copper smelting. 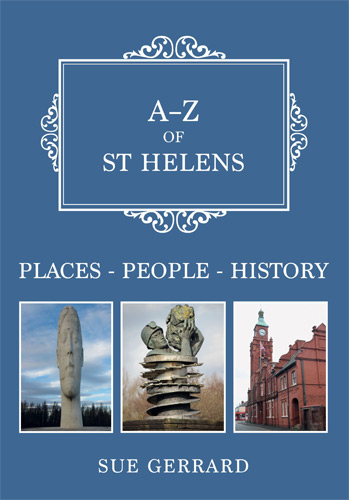 Among the trail-blazing of St Helens was that it had the first navigable waterway in England, the Sankey Canal, which opened in 1717, and the World’s first passenger railway, the Liverpool to Manchester line, which opened in 1830.

The book, which includes 75 photographs, features a wide-ranging perspective of the history of St Helens.

The eye-catching images include the Dream Monument, which stands within Sutton Manor Colliery; the Quaker House, which is the town’s oldest building; and the Worker’s Memorial in Vere Page Park. It commemorates workers killed, disabled, injured or made unwell by their work.

Gerrard delves into diverse subjects connected with the district, including witchcraft, connections with the Nuremburg Trial and the influence of Florence Nightingale on the town’s hospitals.