Katy Brown reports on the demonstration held at Liverpool port on Wednesday 27th April against wood pellet imports, and in solidarity with campaigns to protect local green spaces and sacked P&O workers. The demonstration was timed to coincide with Drax’s AGM as the company announced millions in profits, subsidised by bill-payers.

Campaigners from Liverpool Friends of the Earth, Liverpool and Wirral Extinction Rebellion, Save Rimrose Valley, Save Oglet Shore & Greenbelt, Stop the Simonswood Incinerator, Axe Drax and Biofuelwatch gathered outside Liverpool Peel Port to protest against the mass importation of wood pellets through Liverpool’s Peel Port to be burnt at Drax Power Station near Selby, North Yorkshire.

Drax is the UK’s single biggest carbon emitter and the protest was part of the ‘Stop Burning Trees Day of Action’ 1 on day of the AGM of Drax Plc, the owner of Drax Power station. Demonstrations against Drax also took place in in London outside AGM itself, and Hull outside the council offices. While a green jobs fair was organised in Leeds and a ‘real Drax AGM’ in York. 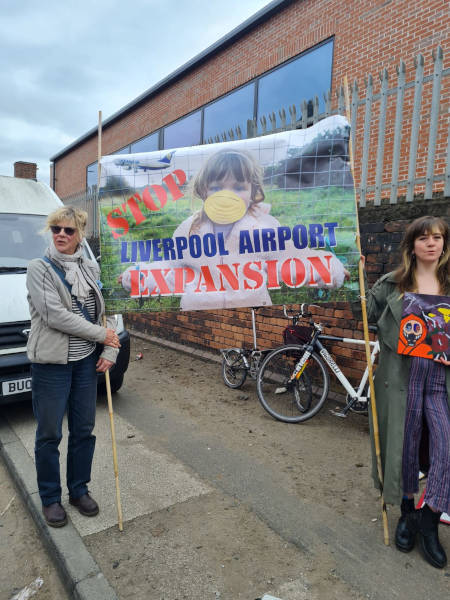 Protesters congregated at the port entrance at Regents Road, from where the train line which carries the pellets to Drax power station is visible. One of these trains – emblazoned with Drax greenwash – passed at 11.30am, to a cacophony of dissent from the protestors including chanting and singing fromthe Liverpool Socialist Singers with a rousing rendition of ‘Hit The Road Drax’.

The campaigners were highlighting how Drax’s wood burning is being funded by public money to destroy forests, harm biodiversity and pollute communities2 and call for this money to be transferred from biomass burning to genuine renewables such as wind and solar power in order to support the climate and a Just Transition for communities.

Despite being the UKs single largest carbon emitter3, Drax received £892.5 million in UK renewable subsidies in 2021 to burn wood which is equivalent to £2.68 million per day.4 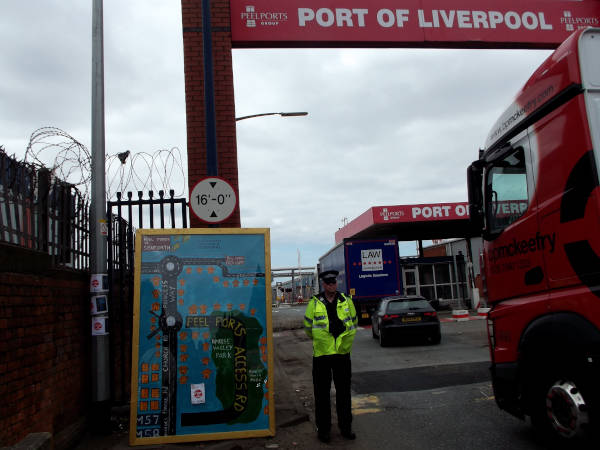 Sally Clark of Biofuelwatch which helped organise the protest said “It’s about time the ridiculous situation of bill payers subsidising tree burning in the name of ‘renewable energy’ was brought to an end. This money should instead be re-directed towards genuinely renewable sources such as wind and solar. That many customers are now struggling to pay their bills while we are in both a climate and energy crisis makes it particularly galling that the surcharge on our energy bills is supporting Drax, the UK’s single biggest carbon emitter. Investing in wind and solar will bring down the cost of electricity and reduce our dependence on importing coal, gas, oil, or wood pellets from overseas. Burning coal, oil, gas or trees will only make the climate crisis worse, and has no place in a sustainable future.”

The activists are also standing in solidarity with local campaigners6 fighting to protect their green spaces from new infrastructure projects also related to the activities of Peel Holdings -The Save Rimrose Valley and Save Oglet Shore and Greenbelt campaigns, which are fighting the destruction of Rimrose Valley Country Park for a new road related to the expansion of Liverpool Port, and the destruction of Oglet Shore and Greenbelt for airport expansion. They are also demonstrating in support of the sacked P&O workers and their unions. 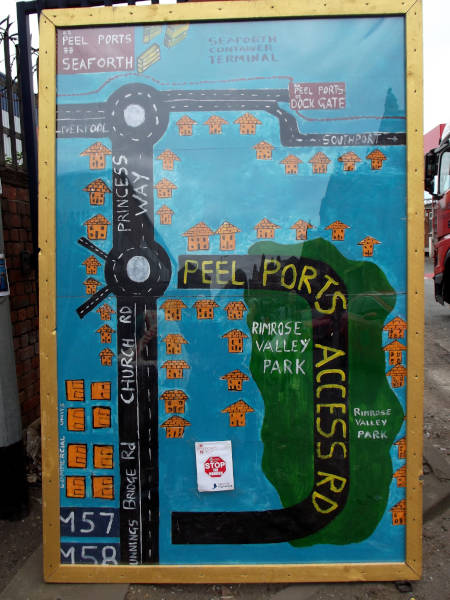 Don Naylor of Liverpool Friends of the Earth, who attended the protest said:

‘Local communities across our City Region fully understand the well-being and environmental benefits of enhancing their green spaces. A fantastic example of putting this into practice is seen through the delivery of Wirral’s tree strategy, already ahead of its target of planting 210 000 trees by 2030. To contrast this with the harm of reckless logging inflicted by Drax, and enabled by UK Government subsidies, on North American and other communities and their biospheres, spotlights a massive injustice. This injustice must end, and our regional decision makers here in Merseyside also have responsibilities to bring this about.’

Kate Elder of The Save Rimrose Valley Campaign said “The dedicated train line that Drax uses to ship the pellets across the country could free up a vital rail freight link from here in the west, to the east coast, taking 1000’s of HGVs off our streets. 90,000 people live in a one mile radius of Rimrose Valley. Many of those also live in a one mile shadow of the Port of Liverpool. We stand in solidarity with all people who live in port cities and are exploited by big business and stand together with other campaigners and community groups on saying; no to these big polluters, no to burning trees and no to the destruction of our green space.” 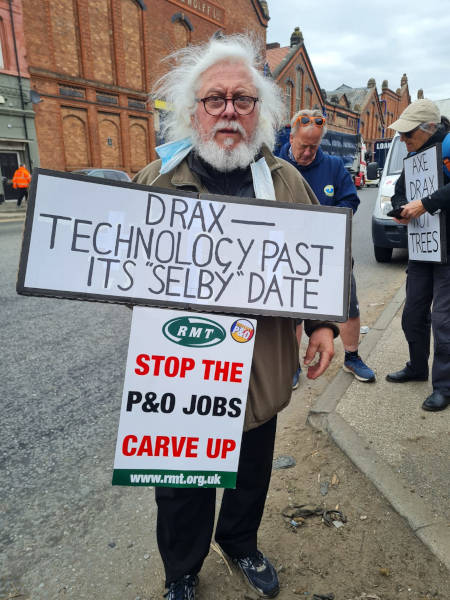 Jane Hammett from Save Oglet Shore said: “Peel has a majority share in the Port of Liverpool and retains a 45% share in the airport. Their expansion plans for the airport would increase pollution, concrete over a vital wildlife habitat and deprive local people of a much needed Green Space. Access to the Mersey shore and farmland will be restricted. If the Airport expansion goes ahead and the planned major new road through Speke is constructed, this will see a rise in air pollution and present an increased risk to health for local people. We need to hold Peel to account for the negative impact their activities have on the people of Merseyside and the Climate.”

2. Under UK law, biomass is eligible for renewable energy subsidies on the assumption that carbon dioxide released by burning wood will be reabsorbed by future tree growth – however, this CO2 will not be absorbed for decades if ever, creating a “carbon debt” at exactly the time when we need to be reducing the CO2 in the atmosphere. In February 2021, over 500 scientists wrote to President Biden and other world leaders, urging them to end subsidies for forest biomass burning because of the climate impact: https://www.documentcloud.org/documents/20482842-scientist-leter-to-biden-van-der-leyden-michel-suga-moon-february-11-2021

6. Save Rimrose Valley and Save Oglet Shore & Greenbelt. Local groups Liverpool Friends of the Earth and Extinction Rebellion Liverpool and Wirral also supported the event, as well as biofuelwatch and Axe Drax.