The history of Birkenhead, which is located on the Wirral Peninsula, across the River Mersey from Liverpool, dates back to the twelth century when the Mersey Ferry was established. 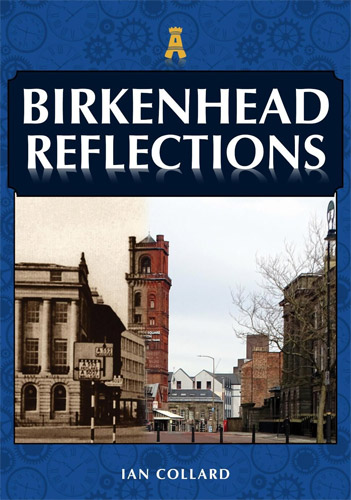 Ian Collard, a well established local author, has assembled over 180 photographs, each of them combining a colour view with a matching archive picture.

As quoted in the book’s press release ‘Readers can see how streets, buildings, industries, the port and aspects of everyday life have transformed with the passing of time.’

Among the many locations included in the book is Hamilton Square, of which I have fond memories. Work commenced on building it in 1825 by the Edinburgh architect Gillispie Graham. In 1835 this area was used to establish Birkenhead’s first market.

I was also a frequent visitor to the area’s Mersey Railway building. It was opened in 1886. The Merseyrail network now has 68 stations. It is the most used urban railway network in England outside London.

I am not a big fan of walking around shopping centres – it bores me – but I have been to the Shopping Centre based on Grange Road. In the 1960s Birkenhead Borough Council gave approval to the redevelopment of the existing shopping centre based there. Grange Road was pedestrianised, with modern shopping units established there.

One of the most unusual locations in Birkenhead is the One O’Clock Gun at Morpeth Dock. It is a relic of the Crimean War.

I will leave the last comment to Ian Collard. ‘This visual chronicle, which reflects Birkenhead’s past and present, will appeal to residents and everyone with links to the town.’