Fascists and members of the far right have been profiling anti-fascists for decades, and the age of the internet and smart-phones makes it even easier to do. There are websites, social media groups, and sites on the ‘dark web’ dedicated to profiling activists, sharing their photographs, phone numbers, places of work or education, their home addresses, and details about their family lives.

This profiling isn’t harmless, though – it leads to assaults at home or in the workplace, intimidation, damage to vehicles and homes, distress for family members and partners, and the resulting stress and impact on mental health.

Many activists want to participate in activism without being stalked, harassed or assaulted by racists and fascist organisers. Most people who choose to wear a face covering at a demo are asked about it at some point. “With respect, many people who aggressively challenge activists for wearing masks don’t have an understanding of the wider situation”, M, an activist from the north-west, explained. “Just because I’m prepared to attempt to stop fascist marches doesn’t mean I should also be prepared to hand over mug-shots of myself to them, and be ok with them turning up at where I work – or, worse, my home.”

‘Bobby’ is a young student. “For me, it’s because of college. I’ve been told if my face appears in the papers or on social media, I’ll be removed. I don’t see why my education should suffer because I stand up to racists.”

An activist, who identified themselves as Mr Sands, explained, “I wear a mask because I want to be able to leave an action and return to my everyday life. Wearing a mask isn’t to intimidate anyone, it’s just a tool for a job and means that I can act securely. There’s always the possibility of being identified and picked out for attacks later. I’ve already been assaulted once and would rather it didn’t happen again.”
Fascists aside, there’s also the threat from police data-gathering teams, who attend demos with cameras, and use sophisticated face-recognition software to help profile activists.

“The police don’t care about why we do what we do,” said M. “They just want us to stop doing it, and so try to build up large databases of information on activists. Often policing at demos and protests is wildly inappropriate, misinformed or downright illegal, which is why we use trained and well-respected legal observers and lawyers to monitor the actions of both the police and us. The public would be shocked if they knew the threat that incompetent or malicious policing poses to average citizens engaging in protest.” 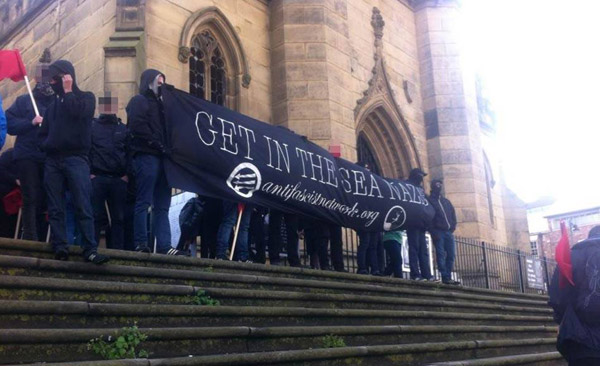 Mr Sands suggested a different take on the issue of masks and face coverings. “The question shouldn’t be why we mask up on an action, but why more people don’t.”

In this opinion, individual activists aren’t alone. The Network for Police Monitoring (NetPol) is a network of lawyers, researchers and campaigners that monitors police overreach, intelligence-gathering practices and abuse of power. In a May 2015 article, ‘Why cover up? The Case for Protest Anonymity’, NetPol noted that the risks posed by an increasingly aggressive and draconian policing style meant that there were good reasons to wear masks to political events and protests.

NetPol went further, and suggested that the normalisation of face-coverings at such events – from militant anti-racist protests to more mainstream, ‘fluffy’ peace-walks – would be a progressive step in the defence of civil rights and rights to privacy.