Many authors wear alienation as an emblem to give their work depth. But it is not glamorous or profound. It can be desperate. And it can be very dull. People shy away from the reality because on the surface it is not dramatic enough. To make it interesting and yet honest is a tough task.

Birkenhead has produced artists before who have manged this and Nathan O’Hagan is part of that tradition. Even though he’d probably hate the idea. His novel The World Is (Not) A Cold Dead Place has been published at a time when the reality facing those who find it hard to fit in has been exposed in a very raw way. The main character suffers from major anxiety issues and OCD. It’s a tough journey to take with him. But it is very real and funny and touching.

How close are you to the main character Gary?
There’s definitely similarities, particularly the rage that he feels at modern Britain, at other people, but I think those themes are pretty universal. It’s the little things that drive us to the edge sometimes. We’ve all been in situations similar to the ones Gary faces. To most people, though, they’re a minor annoyance, whereas to Gary, they just hasten his impending implosion. I feel very close to him as I spent several years constructing the character. As pretentious as it may sound, he feels like a real person to me and I feel oddly protective of him.

To begin with, the only thing that was clear to me was the character. The themes, such as alienation and the effect that has on a person, inevitably came from that. A theme that emerged during the writing was the complexity of human interaction. Some people do it effortlessly, but for some of us, it’s a daily struggle. I wanted to reflect this in a funny and dramatic way.

Does it matter whether readers empathise with Gary?
I never wanted to be in any way didactic about how the reader interpreted Gary. He’s a challenging character, and I wanted the reader to make their own decisions. Is he an unreliable narrator? Is he misunderstood? Is he just a bastard? I wanted to create a character who could prompt all these questions. I’m happy for a reader to dislike or even hate Gary, I just want them to find him interesting enough to keep reading.

Do the problems Gary faces with authority reflect the problems we all face?
The novel was published at a time when people like Gary face huge challenges. There has been a significant shift in societal attitudes towards people on benefits. At a time when our understanding of mental illness is increasing there is growing and at times vitriolic resentment towards people on benefits. I wrote the book under the last Labour government, so it was entirely coincidental that it was published around the time when Iain Duncan Smith was making it his mission to disrupt or destroy the lives of as many disabled and mentally ill people as possible. 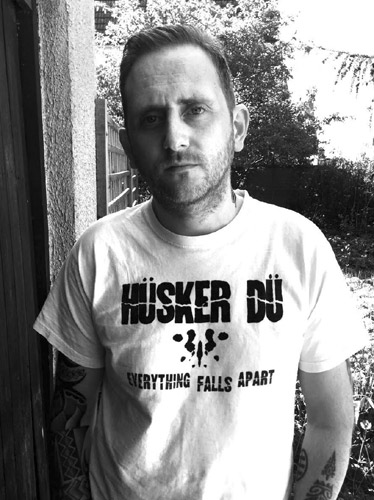 Why did you make the decision to set the novel in Birkenhead?
Initially I didn’t. In early drafts the town Gary lived in wasn’t specified, it was just implied that it was Merseyside. But as I kept writing, I realised that, as a lot of Gary’s issues are caused by his home town and what he sees around him, it made more sense to set it in a real place. And once I made that decision, it made writing the novel so much easier. In fact, I’d say that it was crucial. I’m not sure the novel would have worked as well set in any other town, and certainly not in a fictional one. Birkenhead suffers from the same social problems as countless other British towns. The factors Birkenhead faces lead to certain social issues that are particularly provocative to Gary.

Was it important to offer the reader hope?
Initially that wasn’t important, and wasn’t something that I was planning. But during the process, there were changes in my personal life which were reflected in the novel. I fell in love, and that altered my world view somewhat. And from a dramatic standpoint, I decided that it was simply too easy to continue that misanthropy through till the end. It was more of a challenge to try to leave Gary in a place where there is at least some degree of hope. And I believe there is always hope for people. People go through miraculous transformations every day. People beat addictions, overcome trauma, and manage to achieve and build a life for themselves against the odds. People who are much more far gone than Gary pull themselves back from the brink all the time. Redemption is always possible.

The World Is Not A Cold Dead Place is available from usual online outlets and bookstores and from News From Nowhere, Bold Street.