Photo: Women gathering after a meeting in Qamishli to decide how  to deal with security in their neighborhood

A little over a year ago, in February 2015, an invisible nation rose to its feet in the Syrian town of Kobanî and successfully defended its territory from a band of rapists and torturers who hoped, and still hope, to one day bring about a glorious apocalypse.

By Thomas Phillips, PhD researcher in International Human Rights Law and the Kurdish Question at the University of Liverpool

The Kurdish People’s Protection Units (YPG) and Women’s Defence Units (YPJ), with the crucial assistance of coalition airstrikes, didn’t only resist ISIS – they pursued the fascist gangs to the gates of their stronghold in Raqqa and evicted them from dozens of towns and villages in Northern Syria.

It used to be the case that the secular Kurds had no friends but the mountains, despite the fact that they have been resisting Middle Eastern despotisms for hundreds of years: from Saddam Hussein to the Islamic dictatorship in Iran to the racist al-Assad dynasty in Syria and the ultra-nationalist Turkish state. When these monsters were the best friends of the US and the UK, the Kurds were always at the forefront of the resistance and have always had the potential to spark a long-overdue transformation of the Middle East. Now that the Kurds are fighting our enemy for us, they are suddenly all over the news. But there is more to this story than bands of beautiful women with rifles ululating over the defeated remnants of ISIS gangs.

The Kurds: A Very Brief History

The Kurds, who number approximately 30-40 million, are a unique ethnocultural group whose existence in the mountainous regions between modern-day Turkey and Iran can be traced as far back as the fourth century BC. They speak a unique language, have a shared sense of history and solidarity, and immerse themselves in unique cultural practices.

Until the Allied victory in World War I brought about the introduction of the nation-state system to the lands of the former Ottoman Empire, the Kurds enjoyed far-reaching self-governance under Ottoman rule. When that model could no longer compete with the European nation-state model, the Ottoman Empire began to crumble and eventually collapsed. In the aftermath of the First World War, the Kurds were promised a state of their own in the first peace treaty with Turkey (the Treaty of Sevres). After Turkey’s war of independence, the treaty was renegotiated and a new one signed in Lausanne. The Kurdish homeland was divided between Syria, Turkey, Iraq and Iran, and the Kurds were destined to become minorities in all four states.

From that point on, the Kurds’ identity was seen as a threat by their host states. Speaking Kurdish in public became a crime, education in Kurdish was outlawed, and any attempt to resist was brutally crushed. 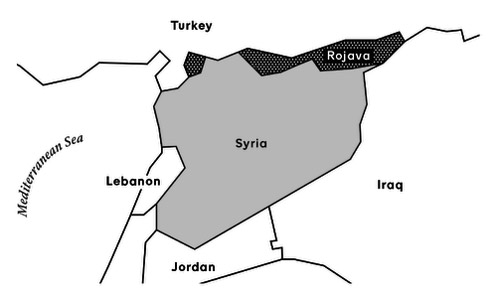 The Kurds and the Future of Turkey

Kurdish resistance in Turkey has evolved around the Kurdistan Workers Party (PKK), led by Abdullah Öcalan since its establishment in 1978. The PKK started life as a Marxist-Leninist organisation and carried out a long armed struggle for the establishment of an independent Kurdish state. Decades of non-violent struggle had yielded next to nothing for the Kurdish people, who were not even permitted the basic freedom to identify as Kurds (the state insisted that they were mountain Turks who had forgotten their language). Kurdish names were forbidden, Kurdish history was erased from textbooks and anybody who tried to promote their Kurdish identity ended up in prison.

After his arrest in 1999, Abdullah Öcalan began a radical rethink of the PKK’s ideology. Having been influenced by the work of the American socialist Murray Bookchin, Öcalan developed the concept of Democratic Confederalism. According to Öcalan:

“This kind of rule or administration can be called a non-state political administration or a democracy without a state. Democratic Confederalism is based on grass-roots participation. Its decision-making processes lie with the communities.”

These ideas are promoted through the PKK’s de facto political wing, the HDP, which contested Turkey’s parliamentary elections in 2015. The HDP’s election manifesto strongly emphasised its commitment to universal human rights and argued for a decentralised Turkey that involves all ethnic identities. This programme gained enough support in the June election to surpass Turkey’s 10% election threshold and deprive the governing AKP of its parliamentary majority, thereby scuppering President Erdogan’s plans to establish an all-powerful presidential system.

The AKP government’s response was to completely break-off its on-going peace negotiations with the PKK and resort to full-scale war against Kurdish towns and villages that voted for the HDP. The message to Kurdish voters was clear: declare loyalty to the HDP and you will be crushed.

Although the AKP succeeded in regaining its majority in a fresh election, the cost has been staggering. Some Kurdish towns have been under total siege for months on end while a shoot-to-kill policy, which Amnesty International has described as collective punishment, has been in operation. The right to life has been violated on a massive scale, historic towns have been destroyed, around 400,000 people have been displaced, dissenting voices have been silenced and imprisoned, and the European Union’s Turkey rapporteur has openly warned of the possibility of civil war.

At present, President Erdogan and Prime Minister Davutoglu are attempting to lift the parliamentary immunity of HDP leaders and prosecute them for “disrupting the unity and territorial integrity of the state,” or in other words, proposing a perfectly reasonable solution to the Kurdish Question based on decentralisation and having the audacity to win wide support for that proposal in a democratic election. Meanwhile, European states, in their desperate attempts to keep Muslim refugees in Turkey and away from Europe, are turning a blind eye to Turkey’s descent into fascism. If that policy doesn’t change then it might soon be wishful thinking to talk about peaceful solutions to the Kurdish Question.

The Turkish state’s opposition to Kurdish freedom does not stop at its southern border. In Northern Syria, or ‘Rojava,’ the Kurds have established several autonomous cantons under the governance of the Democratic Union Party (PYD). Like the HDP, the PYD is philosophically and ideologically linked to the PKK and Abdullah Öcalan.

The PYD’s Social Contract declares that Rojava is a confederation of various ethnic groups, recognises Syria’s territorial integrity, and affirms that the principles of Democratic Confederalism are to be applied. These principles include the equality of all persons and communities, local, bottom-up self-government, commitment to international human rights law, ecological feminism, and gender equality.

Although it is difficult and dangerous for an outsider to attempt to judge what is going on in Rojava, there is compelling evidence to suggest that the peoples of Rojava have managed to create something quite different from the rest of Syria. Females in Rojava don’t just fight on the front lines – they also sit in democratic women’s assemblies and deal with gender-specific problems; efforts are being made to switch to a democratic, co-operative model of business ownership; and for every position at every level of government in Rojava, there is (at least in theory) a female equivalent of equal authority.

These valuable gains for human emancipation have been achieved in the face of a comprehensive blockade imposed by Turkey and its clients in the Kurdistan Regional Government of Northern Iraq. Furthermore, the Turkish government has insisted that any attempt by the Kurds to turn their isolated cantons into a contiguous region will lead to violent repercussions – as Kurdish forces have discovered to their detriment after attempting to kick jihadist forces out of territory west of the Euphrates river.
As the region changes shape, new political entities are being formed and old ones are withering away. Predictably enough, Turkey wants leverage in negotiations on the region’s final settlement, and in order to achieve this it projects its power into Syria through proxy jihadist forces and its influence over the Syrian opposition’s High Negotiations Committee. It uses its proxy forces on the ground to attempt to prevent the emergence of a Kurdish proto-state in Northern Syria that might one-day link up with the Kurds in Turkey, and when that doesn’t work it resorts to outright aggression against the Kurds in Syria, Iraq and Turkey.

There is no longer any doubt that the Turkish government has been assisting jihadi groups in Syria, including ISIS. Its latest attempt to support the islamists involves a demand for a “buffer zone” or a “safe zone” along a 50km strip of the Syrian border. Like everything else in the Turkish government’s parlance, this would be the exact opposite of what it claims to be. The fundamental aim of the proposed buffer zone would be to allow the Turkish state to continue backing the islamist gangs by preventing the formation of a contiguous Rojava. This has nothing to do with providing a buffer between Syria and Turkey and nothing to do with ensuring the overall safety of the Syrian people.

At the same time, Turkey has been hindering the liberation struggle of Kurds, Yazidis and others. By illegally bombing the PKK in Iraq – which successfully rescued stranded Yazidis from Mt. Sinjar and brought them to safety, and which continues to fight for the liberation of Yazidi towns and villages – the Turkish government is hindering the Yazidis’ struggle. By bombing the YPG, the Turkish government is providing valuable assistance to the jihadi enemy in Syria and elsewhere.

Those who stand for leftist principles, including secularism, universal human rights, anti-fascism, anti-totalitarianism and the empowerment of the disempowered, should offer our solidarity to the Kurds and their allies in Rojava and South-East Turkey. We should also learn from them as they attempt to achieve in practice what we support in theory. As the Kurds say: “Jin, Jiyan, Azadi!” (Women, Life, Freedom!)