The artwork of Honduran artist Javier Espinal in Liverpool

Since then the poor Central American republic has become the most violent country in the world, with a homicide rate of 90.4 per 100,000 in 2012. Drug trafficking, street gangs, corruption, massive inequality, and almost total impunity, combine to make a “perfect storm” of violence.

Many of the murders are politically motivated, directed against those who resist the forces behind the coup and their economic interests.

Artist Javier Espinal was born in Tegucigalpa, the capital of Honduras, in 1967. He was raised by his grandparents, who he says set him on his spiritual, artistic and rebellious path.

He has been involved in resistance to the oppression for most of his life, especially since the coup d’etat.

He rejects the idea of art as the expression of the individual. Art should be collaborative, a living expression of cooperation. Therefore, he works with communities, especially marginalised and oppressed communities, to create murals, that are a form of cultural resistance. He looks for “alternative, independent, integral spaces, where we can find our identity and create art, awareness, visibility, diversity, political education, action.”

As part of a year-long tour of Europe aimed at raising awareness of the situation in Honduras and forging links of solidarity, Javier came to Liverpool, where he gave presentations and created murals in Granby, in collaboration with local youth.

It may be a long way from Honduras to Liverpool but Javier sees parallels between the successful campaign by the Granby 4 Streets, and those of Honduran indigenous movements, fighting to keep hold of their land in the face of aggression by capitalism, trying to drive them away to make way for African palm plantations, mega projects, hotels, etc. 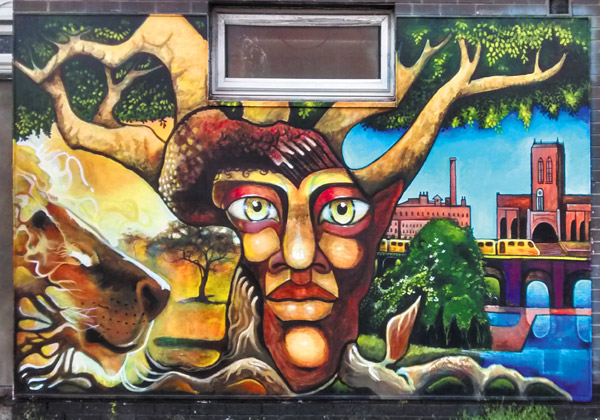 The murals, in collaboration with and funded by Liverpool 8 Legacy Fund and the Metro Methodist Youth Centre, were painted on the side of the youth centre on Beaconsfield Road in Granby, Liverpool 8.

The theme of the project was to celebrate the African roots of the area’s population, youth, art, music and Liverpool, as part of the regeneration of the community by the community.

Children from the Methodist Youth Centre sketched ideas, which Javier helped to enlarge into templates for the murals. Then the local children, and anyone else who wanted to join in, painted the mural. This is typical of Javier’s mural painting methodology.

“We paint with the entire group,” Espinal explained. “Only on the last day do I work alone, to give the mural the finishing touches and to make sure that everything is well integrated.”

Espinal, who has done similar projects in Italy, Spain and Manchester on his tour, is also raising funds to create an international gathering of muralism and collective art on the island of Zacate Grande, in the Gulf of Fonseca.

The event is scheduled for December 2015, and aims to support the island’s inhabitants in their struggle for the land against oligarch Miguel Facusse.