Demographic Changes
There are some major changes going on to the demographic mixture within Liverpool which are very obvious to me. The city has one third of the population which existed in the mid 1930s. Now another change is taking place in the city centre, and it will have profound effects upon the population within the next decade or so.

More Students in the City Centre
With all the new student flats being built, the average age of the central Liverpool population will soon fall from circa 32-34 down to nearer 20-22. Just count the number of new student blocks being put up right now and do the maths. Thus the demands for what is needed in the city centre will change, and outside of term times many areas will resemble the Marie Celeste. It will also produce more of a transitory population, which will have no vested interest in looking at or concerning themselves with local issues. While all the people who used to rent rooms or flats further out of the city centre will find it more difficult to let them out. Net result – less money going into the local economy, while the big firms, which are building or renting the new student blocks, will be making a nice big profit.

No Representation without Taxation
One of the key points to keep in mind from a local perspective is that students pay NO council tax, unlike pensioners and the city poor, but they still use all of the local services. Students might moan about their loans, but not paying council tax means they do receive a de facto subsidy from the rest of the local population. So while some people debate about ending or cutting down student loans, the way in which they contribute, or rather don’t contribute to local services, does need to be added to this mix. As an aside – It should also be remembered that many of the pensioners who are paying this council tax started work between 14 to 16 years-of-age, never knew what a gap year was, and stood no chance of going to university. Ditto, many of today’s pensioners never stood a chance of buying their own homes, and will be paying rent until the day they die. So where are the new flats being built for the elderly in the city centre? Yet the home help and social services for the elderly and disabled are regularly being slashed. 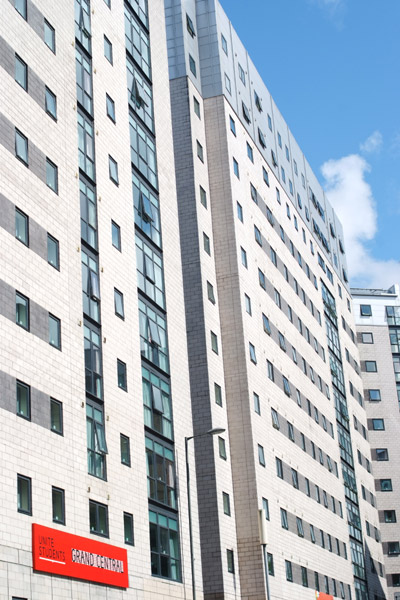 No Easy Solution
I’m not calling for any cuts or easy solutions to be made. What I’m calling for is a reassessment of the fact that it is only student flats that are going up, as it is starting to encourage a resentment of students by the rest of the population in the city, and will make for a very unbalanced population mix if things continue this way. We also need some more imaginative thinking when it comes to urban planning.

Vacant
What’s really notable about the city centre is the number of shops which are boarded up, or have a To Rent sign outside of them. Ditto, the many buildings which are vacant and which would make excellent low cost flats. It also is a constant wonder to me how many vacant plots of land in the city centre are just covered by grass, but would be ideal for small urban parks or miniature woodlands, which will help to counter air pollution and global warming. These plots of land would also make excellent locations for small workshops, community centres, or eco-villages.

Many of these ideas are not really new ones
As someone who comes from Cockneyland I can see that there is a lot of potential to really develop the centre of Liverpool as a people-based and ecologically balanced city. Yet where is the imagination to create these things? Though the real question is, if anyone would be willing to put some money in to creating such an urban dream?