(Photo above: Protesters outside Aintree Racecourse on Saturday)

Sarah Austin of Merseyside Animal Rights asks why public money is supporting the Grand National, the country’s most deadly steeplechase?

The stands were mostly empty at Aintree over the 3 days of racing last week but campaigners still had a presence outside. A small banner protest took place on the Friday, while Saturday saw protesters stand vigil throughout the day which ended with the sad death of horse The Long Mile, who suffered an injury while running on the flat between fences during the Grand National, demonstrating just how gruelling this particular race is. Footage shows this poor horse continuing to run with its severely injured leg swinging from the joint, a horrific injury, but one which you or I would be treated in hospital for. The fate of horses injured in racing however is more brutal than the racing itself. The sanitised term euthanised is used in the mainstream media: standard procedure is for injured horses to be shot, whether or not they would recover from their injuries with treatment. Once they are deemed no longer of use to the racing industry then their lives are of no value to them and they are dispensed with.

The racing press have described The Long Mile’s death as a ‘tragedy’, however race horse deaths are commonplace, with over 200 deaths across the industry in races alone annually. This figure does not include deaths in breeding, training and being put to death due to ill health/retirement. Merseyside Animal Rights is calling for all horse racing to stop. 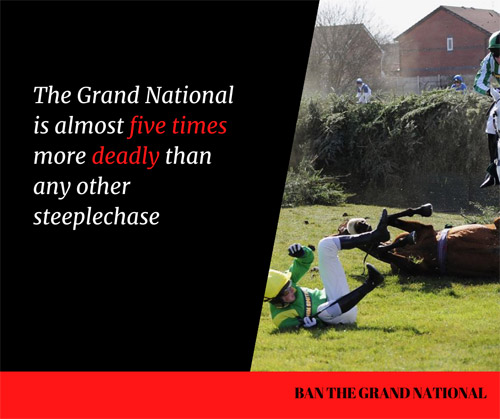 Merseyside Animal Rights wants the Grand National banned and is asking the public not to bet on the lives of horses.

The Grand National does stand on its own in its cruelty. At 4 ¼ miles, it is the longest thoroughbred national hunting (jump) race in the UK with less than 42% of horses completing the course. The Grand National has claimed 13 horse deaths in the last ten years. It records a higher number of deaths and injuries than any other steeplechase.

A horse dies on a race course every 2 days

Since Animal Aid started monitoring and reporting horse deaths on race tracks with the launch of its Horse Death Watch website in March 2007 there have been 2216 Deaths in 5145 Days. As detailed above this does not include those that die in other aspects of the racing industry.

The Grand National has become symbolic of the cruelty of horse racing. In recent years there have been protests at Aintree but these have always been controlled by the police. In 1993, however, activists succeeded beyond their wildest dreams as the steeplechase had to be abandoned when activists jumped onto the course and occupied the ground in front of the first fence. Police and security guards were taken completely by surprise, the start was aborted and 1993 became “the race that never was”. The animal rights dimension has largely been written out of the story which cost the racing industry £75 million. 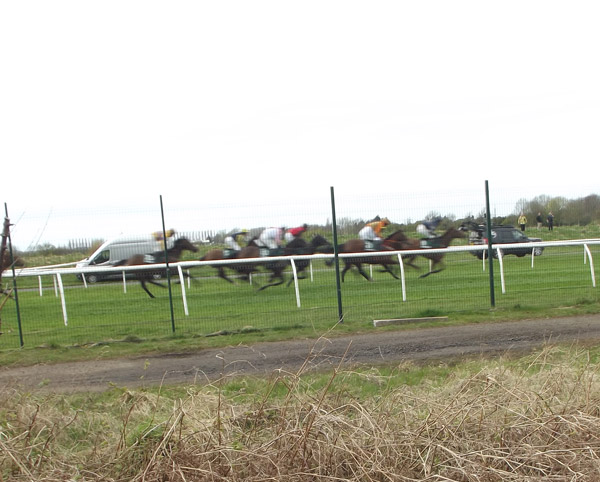 There had been protests against the Grand National during the eighties but a more militant campaign began after the deaths of four horses in 1989 and seven more the following year.

The British Horseracing Authority has introduced measures to make the race safer, but states that the demanding nature of its circuit “naturally comes with its risks”. Our response is “Why should horses have to endure these risks for human greed?”

The callous attitude of the racing fraternity was summed up by champion jockey Josh Gifford who said: “I don’t know what all the fuss has been about. In this game horses get injured and killed every day, even exercising on the gallops.”

In August 2017, jockey Davy Russell was given a four-day suspension for punching a horse on the back of the head before a race at Tramore. Russell won the Grand National the following year.

This reflects recent stories in the media of trainers and jockeys sitting on dead horses. There does not in 22 years seem to have been any change in attitude.

The horse racing industry will benefit from £21 million in government loan support from the winter phase of its sports survival package with this money being committed to the Horserace Betting Levy Board (HBLB). Racing’s leaders asked the government to allow the Levy Board to be the recipient of loan funding, because of its role in providing central funding to support race day and other industry costs. At a time when the NHS and other vital services need our support, why is the Government funding race days which kill and injure horses? 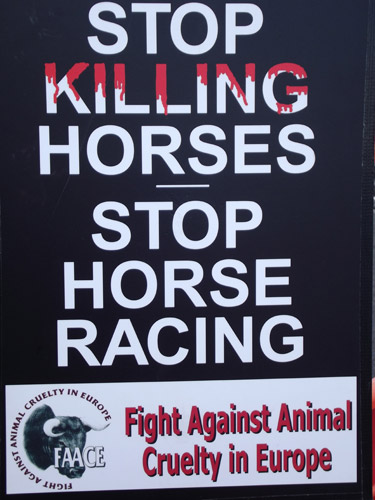