On 20th March 1991, 350 refugees from Nicaragua returned to war-torn El Salvador to settle on land that had previously been owned by large land-owners. The group consisted of people of all ages and genders, including children. They had had to leave El Salvador during the 1970s and 1980s. At that time, the army and a quasi-feudal government and landholding class were fighting against the guerrilla group FMLN – Frente Farabundo Martí para la Liberación Nacional, El Salvador. The army received the support of the U.S. government, including weapons, funding, and training. The army and death squads mercilessly persecuted and often tortured, forcibly disappeared and assassinated anyone who was suspected of supporting the guerrilla, or who was engaged in any struggle for social justice, labelled wholesale as ‘Communist’ by the army and the government.

Many among those returning from Nicaragua had lost family, friends, communities and livelihoods to the repression. Some of them had supported the guerrilla, or had been part of it. When they first arrived in Nicaragua, the country was governed by the FSLN – Frente Sandinista para la Liberación Nacional, Nicaragua – themselves a former guerrilla group. They had overthrown Nicaragua’s tyrant Anastasio Somoza. Some of the Salvadoran refugees married Nicaraguans and started families. But in 1990, the FSLN lost the election and a right-wing government took power. They branded the Salvadoran refugees as insurgents and terrorists. Nicaragua was now no longer safe for them. They decided to return to El Salvador and to set up a community of their own, with their Nicaraguan families. 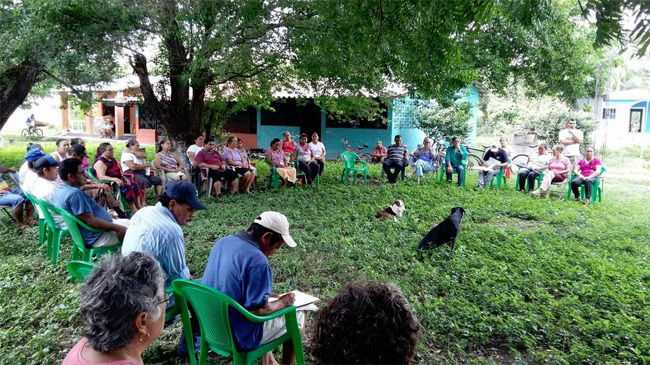 Upon arrival in El Salvador, the group found that the land allocated to them was not suitable for cultivation and could not have sustained their community. They decided to take suitable land nearby, which had previously belonged to landholding families. Tents and shacks were built, and the returnees started to cultivate the land. They founded cooperatives to organize collective work and to sell their products, their community being governed through assemblies and councils. Over time, Salvadorans who had taken refuge in other countries, like Honduras, joined them. Even some former members of the armed forces became part of the new community, named Nueva Esperanza, ‘New Hope’. Video in Spanish available here.

When the group had set off from Nicaragua, they were seen off by a group of British people who worked in Nicaragua and were active in solidarity work for Nicaragua. This group had been told by a local contact about the refugees’ decision to return home, and wanted to support them. Two of them, Mogs and Tim, were teachers from the UK. For years to come, they visited the new community several times, from Nicaragua and eventually, from the UK. Once they had returned to Birmingham, they set up a local solidarity project with the community. They focussed on fundraising for the training of the community educators and for building local schools and nurseries, as this project was close to their hearts and the social circles they could access.

Mogs and Tim were also in charge of what they call ‘reality tourism’ – video in Spanish available here. People from the UK who shared the ethics of the community visited there, to learn about the challenges and joys of the inhabitants of Nueva Esperanza. The groups would stay for about two weeks. They were hosted in the guest house of the community, or with families. One of those visitors was musician Katherine Rogers. She had brought her guitar with her and was frequently jamming with members of the community. She soon realized that despite many community members’ love for music, the community lacked the funds to buy instruments. Once back in the UK, Katherine started to fundraise. Her initiative turned into what was initially a project and is now a charity, Music for Hope, which has teamed up with a group in Catalonia to support music in the community.

Music for Hope not only helped community members to buy instruments. Soon, it started to support the training of community music teachers from within the community. The teachers create groups of young people aged 6 to 18. Many of the groups have now started to write their own songs and lyrics. The groups play a variety of musical styles, and there are even some choirs. They perform at celebrations and festivities.

The strong social and political cohesion of the community, and the Youth Work of El Salvador has recently had to contend with a new danger: the gangs that rule much of El Salvador. In a country with few economic opportunities, gangs initially promised many young people a sense of community and upward social mobility. Gangs fund themselves through extortion, drug trafficking, human trafficking, and other illicit activities. They fight each other with vicious brutality, and demand complete loyalty from their members. Those who do not obey are tortured and often killed, with the same fate often awaiting their family. Young people are coerced into joining gangs through threats of rape and assassination, of themselves and their loved ones. Meanwhile, death squads hunt down anyone suspected of any sort of association with the gangs. Many young people see only one escape route: to leave the country. 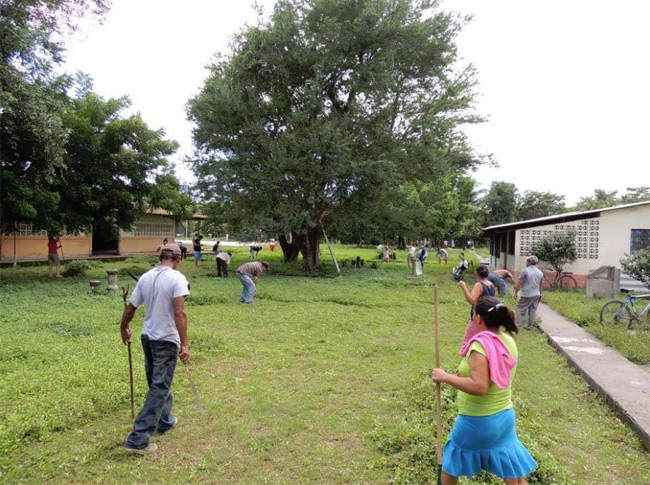 The strong social fabric in Nueva Esperanza resisted the infiltration by gangs for a long time. Over the past years, though, some gangs have become active in the surrounding communities, and death squads have killed several people. Music for Hope’s work with young people is now a stronghold against gang involvement: the young people involved in the project have a community and social purpose, and are not vulnerable to the allure of gangs. However, threats and coercion have meant that some of them have had to leave the country.

Several members of the Board of Music for Hope now live in Liverpool, and so does the Coordinator of the project, who has received political asylum in the UK.

On 10th April, the community of Nueva Esperanza and their UK solidarity movement will celebrate the 30th anniversary of the community. If you would like to participate in this public online event, which runs from 7.30-9pm, please email mogstim[at]hotmail.com and request the link to the Zoom meeting.

Additionally on Friday 7th May, Liverpool Social Centre Next To Nowhere will host an online event specifically on the solidarity work with Nueva Esperanza, more details will be published nearer the time.