The campaign to keep All One Stop Shops continues, even though the service is ended, jobs are lost and the buildings go up for sale.

By Ritchie Hunter
Photos by: Phil Maxwell and Hazuan Hashim

I could think of a better use of time than sitting in a Council committee meeting for over an hour listening to deputy Mayor Jane Corbett ‘batting’ away all the arguments why this vital service should remain; at least until we know the effects of the pandemic on the livelihoods of the city’s population. “The decision has been taken… I won’t pull back… The new model ‘Customer Hubs’ are the best we can do with the money available from the budget envelope… Actually this meeting has no power to change the decision.

“Look at the positives going forward. We can embrace the changes and make this a better service. Using ‘Proportionate Universalism’ [a form of means testing?] we are ‘stacking up’ and targeting those at greatest disadvantage. Anyway changes are already being implemented, starting with the opening of Kirkdale Customer Hub last week. What we need to do now is move on and get our digital champions ‘up to speed’.”

A Lib Dem councillor made the most telling point of the night when he said that the Council, usually criticised for consulting after a decision, had broken new ground here by consulting after implementation! There has been NO consultation of people who actually visit the buildings. They’ve shut before this can be done.

In answer to this Jane Corbett started giving us anecdotes and personal opinions, justifying her decision to uphold the irreversible Council budget which was set in stone, inside a concrete bunker, buried beneath the nuclear fallout shelter under Water Street. She even claimed that her committee had saved jobs, because at one point the cut had been from 99 staff down to 18 and was now back up to 34. So they had actually created 16 jobs! Unbelievable!’ How does one individual have so much to say? How does she have so much power, so much authority? In a Joe Andersonesque display, Corbett even raised the old spectre of the ‘illegal budget’ which “wasn’t going to happen on her watch.” We don’t want the commissions to be called in do we?

So why have this meeting at all? Why the pretence of listening? I suppose it’s something, that we can still force through this kind of debate, even if it is one-sided. Due credit here to the Campaign to Save the One Stop Shops.

At the end of this meeting the ‘Big Rubber Stamp’ was brought down. All the holders of the city’s purse-strings could go away smiling. “Job done. Took longer than we wanted, but that’s democracy.” 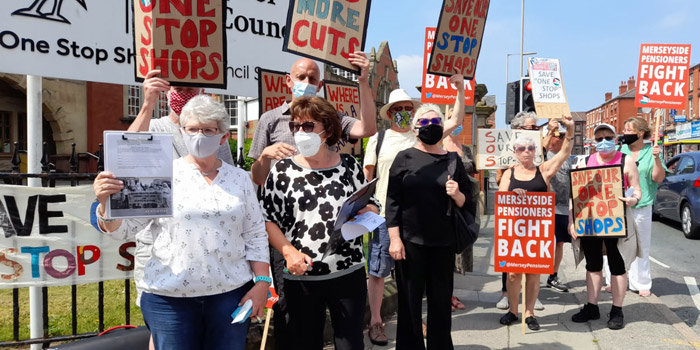 Two full time Customer Hubs, one for north Liverpool based in Spellow Library, and one for the south based in Toxteth Library.

But this won’t be a face to face advice service, and it won’t be a drop-in either. Customer Hub staff, (Digital Champions), will guide people on how to use computers to access information and fill in forms.

Customer Hubs will not be in all libraries, but where they are, they will take up space once used by the local community.

Previous Post: Maple Glider – To Enjoy is the Only Thing
Next Post: Stop the Electronic War Fair