On 30th October 2021, collectives in Liverpool welcomed a group of special, rebel visitors from abroad: a delegation of the Autonomous Zapatista Communities and the Zapatista Army of National Liberation (EZLN) in Chiapas. Their visit took place within the Journey for Life, the most recent initiative of the Zapatistas. Their purpose was to learn about the resistances to capitalism in the lands that are generally known as Europe (including its islands), and what they re-baptized upon their arrival as ‘Slumil K´ajxemk´op’: “Rebellious Land” or “Land which does not give in nor give up.” On their journey through Wales and England, they “invaded,” i.e. stopped in at, both Liverpool and Manchester.

Throughout the summer, several collectives in Liverpool prepared the ground for the visit by organizing a series of events. In mid-July, a collection of communiques and the Declaration for Life was launched as a small book in collaboration with Food not Bombs, on Bold Street. Between mid-July and mid-August, the Other Theatre Group met regularly to collectively write a satirical play mocking taken-for-granted commemorations of the colonization of the Americas and the fall of the Aztec city of Tenochtitlan on 13thAugust. The play was enacted twice on that date; once at John Archers Hall in L8, and once at the Palm House in Sefton Park, where a statue of Christopher Columbus is mounted on a plinth with the uncritical inscription: ‘The Discoverer of America was the Maker of Liverpool’. Tayo Aluko recited his poem ‘“Greatness” In A Time Of COVID’ as part of the second enactment to take to task the glorification of Columbus. There was also a workshop on the Declaration for Life during an Earth First! bike ride along the planned trajectory of the HS2 highspeed railway. 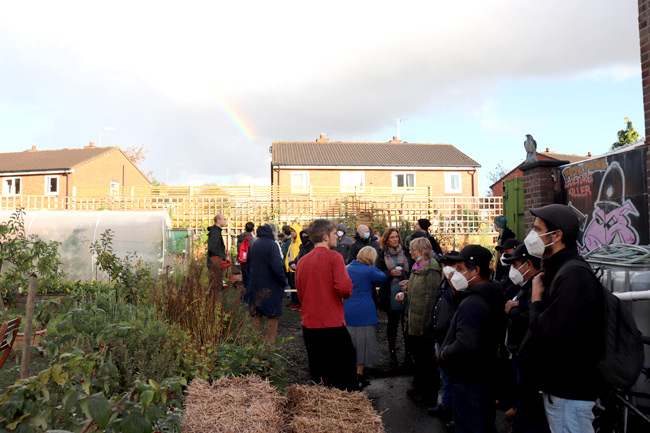 Once it became clear that the delegation was going to be able to visit Liverpool and Manchester, organizers decided to structure the visit so that the delegation could study the long-term consequences of an ongoing colonial mega-project: capitalism, which dates back to the invasion of the Americas and is commemorated with the statues at the Palm House. This grand scale exploitative project continues to be powered by what the Zapatistas call the four wheels of capitalism: dispossession, exploitation, repression, and disdain. It involved the re-organization of space, time, and people’s lives for the sake of profit and “glory” (read: domination). Liverpool and Manchester were the belly of the beast of colonization, the slave trade, and the factory system, all of which produced massive profits for a few at the expense of many. 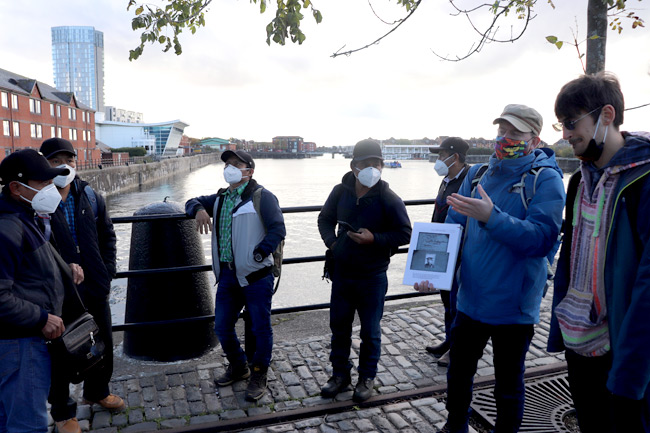 When the Zapatista Delegation arrived, it was first welcomed at Liverpool’s Social Centre Next To Nowhere. There, they met the dedicated group of translators that was going to be with them during the day, and started conversations with some collectives and groups active in Liverpool. They were then taken on a critical historical tour of some parts of Liverpool, to get a sense of the city’s history, role in colonialism, racial-class politics, and militancy. The docks were of particular interest for the delegation – all of its members are from rural mountainous regions where there are no urban ports. After a generous lunch at Rose Howey Housing Co-op, the delegation was welcomed by Granby Winter Gardens before beginning afternoon events at Squash Liverpool and its community garden. After being introduced to the Liverpool climate by a sudden forceful rain shower following a bright and sunny morning, they enthusiastically admired an especially vibrant, beautiful, and perfectly timed Liverpool rainbow. 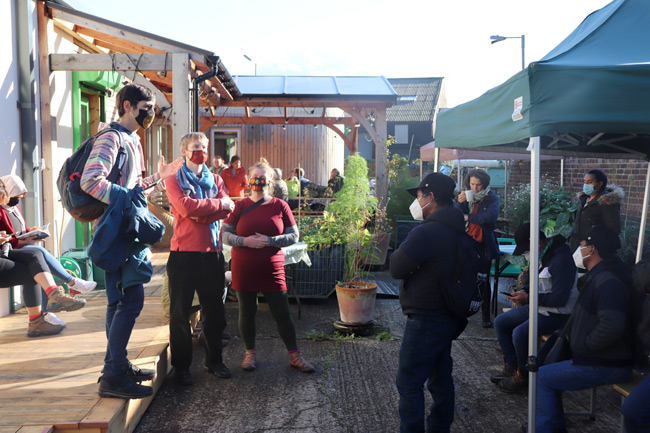 Afternoon activities were kicked off by a musical contribution from the Liverpool Socialist Singers. Around the campfire set up and maintained by the crew from Squash, the members of the delegation then shared their history of resistance with attendees. Next, the delegation split into smaller groups so they could take their turn as active listeners. They then heard about numerous struggles in Liverpool, including: campaigns for healthcare, against gentrification, and for housing justice; efforts of urban gardening, planting, and community mobilising; the Toxteth uprisings and community organising in L8; the presence of the Caribbean community; strikes and solidarity in the past and in the present; anti-austerity campaigns; struggles for justice and against impunity that took on the court system and police; and many others. Altogether, about 30 collectives and individuals participated in the afternoon. 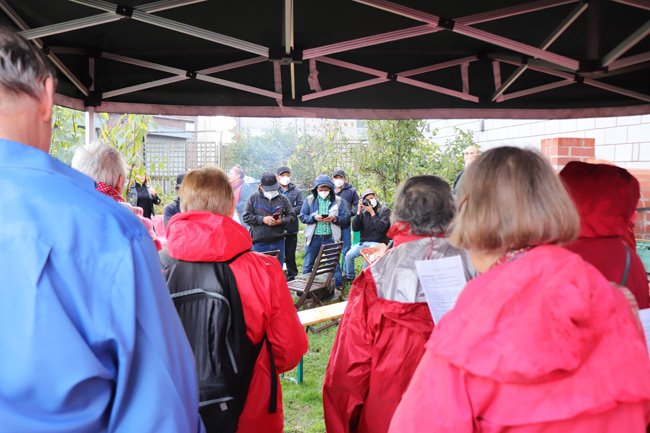 After spending Saturday in Liverpool, on Sunday, the delegation traveled on to Manchester. They got an impression of how the economic and social life in the city was shaped by the infrastructure – like waterways and railways – that served the transport of goods towards and away from the factories and that sustained the exploitative global cotton trade. Also, how the conception of time for workers was organized by and around their work for their bosses. The Zapatistas learnt about the mill workers’ conditions and the multiple resistances of workers against capitalist exploitation. They met members from the Loiterers’ Resistance Movement. Walking through the city, they heard about contemporary problems that Mancunians experience, as a result of neoliberalism and austerity politics, such as gentrification, homelessness and the fragmentation of communities. They were also taken to see the machines that workers were made to operate in the Mills, and saw objects that bear witness to the struggles for democracy and justice, such as banners and the autonomous preservation of memory. In the evening then they met with different groups, individuals and collectives at the radical arts and cultural centre N.I.A.M.O.S. 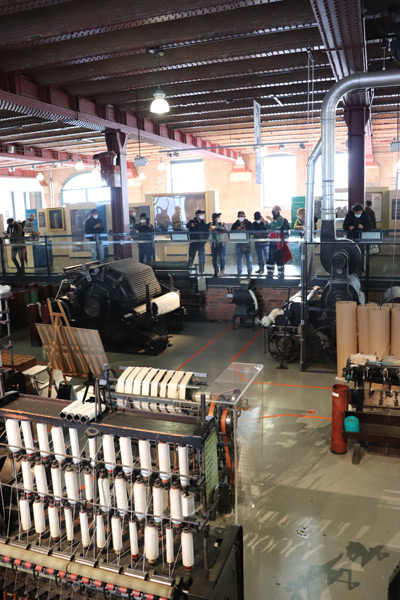 The organizing collectives in Liverpool and Manchester would like to thank all those many people who put their little grain of sand towards the organization of these visits. This initial visit had to be relatively small due to the briefness of their time here. There will be more opportunities to share, grow, and follow up. Notably, the delegation was very happy in both places, and touched by the stories they heard and the people they met. After their return to Chiapas, they expressed this sentiment in their own words in a communique entitled: ‘Thank you’. In the message, the Zapatistas reflected upon their Journey for Life by noting: ‘Everything we brought you came from our people. Everything we received from you is for our communities.’