Climate justice campaigners demonstrated online and outside Leeds Crown Court on Thursday in solidarity with the affected workers, who Drax stands of exposing to wood dust, and in support of the health and safety charges being brought against the company.

Drax is accused of exposing employees to wood dust at its Selby plant by the Health and Safety Executive (HSE), thereby risking their health, safety and welfare at work[3]. The court case comes in the wake of Drax’s $2.5 million fine for breaching air pollution laws in its US wood pellet mill in Mississippi[4].

During a short hearing at Leeds Magistrates’ Court on the 30th of November, Drax indicated that the company would plead not guilty to accusations of two breaches of health and safety legislation.[5] The case has now been transferred to Leeds Crown Court and the company again entered not guilty pleas to both charges at Thursday’s hearing. The trial is due to begin in June 2023.[6]

Campaigners from trade unions, health charity Medact and environmental campaign group Axe Drax[7], joined a banner demonstration outside Leeds Crown Court to show solidarity with workers whose health is at risk from exposure to wood dust.

“Wood dust can cause lung damage and cancer of the nose and sinuses and it is unacceptable if a company, particularly one receiving large government subsidies, fails to protect its workers from it. Drax’s burning of biomass also poses many other health risks, in particular toxic air pollution both abroad where the wood pellets are produced and here in the UK where they are burned. As health professionals we call for investment in clean renewable energy like solar and wind power, which combat climate change and protect the health of the population.” 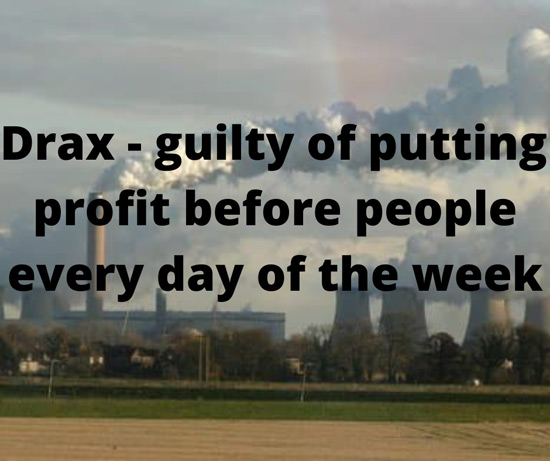 Drax in Yorkshire is the UK’s single biggest carbon emitter[9], releasing over 13 million tonnes of CO₂ from burning wood in 2020[10], and the largest wood-burning power station in the world, fuelled by around 7 million tonnes of wood pellets every year, the equivalent of about 25 million trees[11].

Campaigners said they wanted to highlight the risks Drax’s activities pose to the health of the planet and all its inhabitants, as well as their greenwashing of wood burning as ‘renewable energy’, with a thought-provoking display including a washing machine, greenwashing line and model Drax towers.

Meanwhile, activists online shared social media with slogans including #ProtectPeople, #AxeDrax, #BigBadBiomass and #ForestsAreNotFuel to denounce the impact of Drax’s tree burning on communities around the world.

Wood pellet plants in the US that supply Drax are predominantly located in low-income communities of colour[12], damaging air quality for residents and widening inequalities.

“Facilities that manufacture wood pellets are also sources of harmful air pollution. Pellet mills emit smog-causing volatile organic compounds and hazardous pollutants like methanol and formaldehyde. They also release fine particulate matter and wood dust, which can cause breathing issues and other respiratory problems and has been one of the main complaints from residents that live closest to these mills. These impacted neighbours often live in communities of colour that are already burdened by multiple sources of pollution.”

At its Yorkshire power station, Drax employs approximately 900 people[13] and receives renewable energy subsidies from the UK government equivalent to £2.27 million per day[14], despite biomass CO₂ emissions being greater than those from burning coal.[15]

“Drax has fully rebranded itself as a climate solution, but it will never manage to get away from the fact it has complete disregard for the health of its workers, communities across the globe and the living planet. Earning a wage in the midst of the cost of living crisis we are faced with today is vital. We must not allow Drax to put the livelihood of its workers at risk as they work to survive, while continuing to put profit over the wellbeing of the planet. The government has to stop subsidising Drax, shut down the incinerators, and immediately begin a process of supporting a Just Transition from dirty energy to genuinely green jobs. We have no time left to delay.”

More information on Drax’s environmental and social impact can be found at https://www.biofuelwatch.org.uk/axedrax-campaign/.

Information on the dangers of wood dust exposure is available at https://www.ccohs.ca/oshanswers/chemicals/wood_dust.html