With anti-Semitism still prevalent and the media spin contributing to the ever rising threat of Islamophobia, fascist ideology and right wing activist groups are ever increasing. Refugees fleeing war ridden countries are being used as right wing propaganda. The climate of racism against immigrants and Muslims, together with harsh and uncertain economic circumstances, have created conditions that have allowed the Nazis to grow.

Opposing Fascism in all forms – Education and sharing knowledge – Examining how fascism has been opposed past and present – Improving communication between our activists and campaign groups – Strategies to win the fight against fascism in our communities.

This conference argues that anti-fascist groups/activist from across our movement need opportunities to come together to learn lessons from each other and our history. This enables us build effective strategies to fight fascism now. New activists need to be developed and supported through education and actions.

The conference is open to everyone (experienced and inexperienced anti-fascist activists) and registration begins at 9.30am with the sessions starting at 10.00am.

You must register in advance for a free ticket and tickets are available from News from Nowhere book shop (Bold St, Liverpool) or contact Merseyside Anti-Fascist Network (merseyafn@riseup.net). 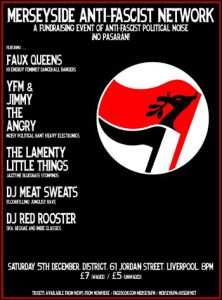 Tickets will be available on the door. However we recommend that you book tickets in advance.