It was announced in September 2016 that Dungavel, Lanarkshire (photo above), one of the UK’s ten Immigration Removal Centres (IRCs), was to be closed down. The centre was often a cause of controversy and campaign groups had long signalled the damaging effects of detention – poor treatment, unduly long detention periods, and, up until 2010, the detention of children.

Despite a moment of rejoicing, the replacement scheme, to build a new 51-bed centre, right beside Glasgow Airport, has not brought about a momentous victory for asylum seeker rights campaigners.

It is highly unusual for the government to listen and implement change on the topic of immigration detention. When Home Secretary, Theresa May commissioned a six-month investigation into IRC conditions from Stephen Shaw, which concluded that many of the UK centres follow cruel practices, including sexual abuse and high-levels of self-harm due to forced depression.

He concluded that detention is ineffective and desperately in need of reform. Despite the damning findings, nothing has been done.

Asylum applications reached 32,414 in 2015 and 64% of initial decisions were refused. While this decision-making is underway, people who have travelled from the most troubled and violent places in the world (Syria, Sudan, and Afghanistan) are forced into prison-like removal centres. The common reasons for detention are: no proper documentation, the supposedly rapid DFT (Detained Fast Track procedure), cases where removal is ‘imminent’, and when certain individuals are not considered ‘conducive to public good’.

The Shaw Report concluded that there was a “very low risk of non-compliance” amongst asylum seekers, yet the general pattern of the present asylum policy is to let anxious people fret in detention. The bureaucracy surrounding the process seems almost purposefully designed to disbelieve tales of persecution and lock people in an authorised form of exile.

The clearest case of this attitude is the DFT procedure. This supposedly time-saving idea is for those whom the Home Office consider eligible for a rapid assessment i.e. those seekers whose claim is straight-forward. Ideally, this should take two weeks; however, once detained the process can drag out. 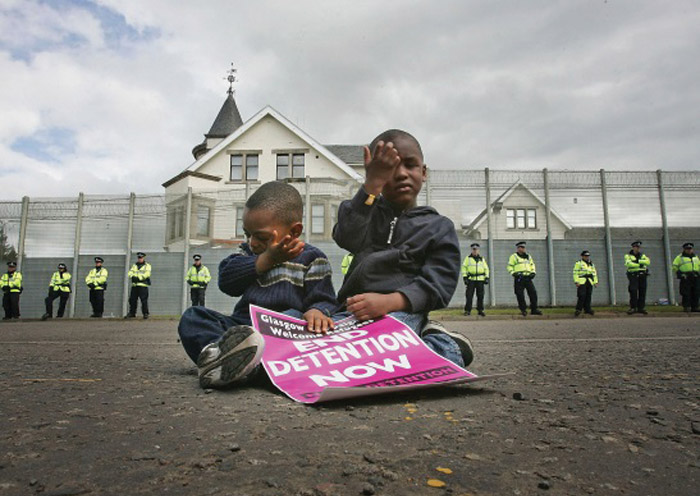 With limited legal representation and often rapidly hurried processes that give little room for their entirely legitimate claims for refuge, they are either denied or kept in IRCs for illegal lengths of time. 90% of the initial claims are refused (lawyers having a single day to prepare the case), and though entitled to contest the decision at the Appeals Immigration Tribunal, the claimants receive no notice or legal aid to do so.

Furthermore, as campaign groups such as Detention Action, AVID and the Refugee Council repeatedly highlight, there is a dark and damaging shadow aspect to bureaucratic neglect: mental health problems. Many cases of depression are documented, along with sleep deprivation, feelings of imprisonment, distress, and even more malevolent examples of maltreatment from IRC guards.

In one BBC report, a detainee told of how fellow asylum seekers in Yarl’s Wood Centre, a primarily female removal centre, are often told that they are faking illnesses. The consequences of this are eventual destitution. Asylum seekers have no right to work in the country and so are given a pitiful allowance – a single parent and one child is awarded £73.90 a week – and either indefinite prison holdings or dire temporary accommodation.

In defiance of the system there is a great amount of activism, in particular by the Refugee Council, and even clear, substantiated proposals for how the system could be changed.

A report published in 2015 by the International Detention Coalition recommended an integrative, community-focused alternative, as opposed to a detention system. They detailed in over 115 pages the benefits of immediate “community-based management” for the length of time the Home Office considers the refugee claim. As well as being ultimately cost-effective for the public purse, the true purpose of this recommendation is to support health needs, stabilize the vulnerable and previously tortured, and avoid human rights breaches.

Evidence for the proposal was lifted from genuine alternative systems operating around the globe, the most subtle and progressive model being Sweden. In that country, prospective refugees are issued an ID card and an individual caseworker to monitor progress. They are given a daily allowance, emergency medical care if needed, and a lawyer paid for by the Swedish Migration Board. On top of just representation there are also opportunities for ‘motivation counselling’ and eventual incentives for repatriation if the result should come back negative.

The current Conservative government in the UK is insulted by Europe, not embarrassed by it. There is little chance of a progressive approach inspiring officials. The answer to the murky network of removal centres most likely resides in harnessing the charitable resources already in action across the country.

If spending was poured into a partnership with community charities, and a community-managed holding procedure introduced, the rights of asylum seekers could co-exist with fair assessment.