Rob Harrison interviewed Jen Verson about her role with MaMa, who actively campaign for justice in the migration system.

Photo above by Pamela Mastrilli

Why was the group formed?
This autumn is the fifth anniversary of Migrant Artists Mutual Aid (MaMa), a cross national network of women, mothers, migrants, artists, academics and activists who work together to support members of our group who are seeking sanctuary, and campaign for justice in the migration system.
From the beginning they have produced events to raise legal fighting funds for women and children seeking sanctuary.
In 2012 MaMa participated in V-Day, an International movement to end violence against women and girls in which people around the world perform Eve Ensler’s play The Vagina Monologues to raise money for grassroots groups.
It was a great opportunity for a really diverse group of mothers, activists, musicians, live artists, actors, directors and academics to perform together. The cast was assembled through our amazing friendship networks and we came together to support a friend who needed a specialist solicitor for her asylum struggle to protect her daughter from female genital mutilation. By 2014, when we decided to perform it again, MaMa had started holding weekly drop- in sessions, which were regularly attended by twenty women from around the world. Most of whom were in the asylum process.
The above is all from the Bluecoat blog: www.thebluecoat.org.uk/blog

What cross section of people does it represent?
We meet weekly and have members from India Pakistan Africa Zimbabwe Nigeria, Bangladesh, Afghanistan and the Democratic Republic of Congo. We use the term migrant to embrace all people who move, whether it’s from North Liverpool to South Liverpool or the Democratic Republic of Congo. The letters MaMa stands for migrant artists and mutual aid, but also reflects our origin of mothers working together.

What problems have you encountered in campaigning for justice in the migration system?
One would say that in the five years that we have been going there has been a major change in people campaigning for justice. When we first started doing anti-deportation campaigns, it was common for community groups to petition the Home Office on compassionate grounds.
In 2013 there was a massive campaign for Isa Muaza, a Nigerian hunger striker. But Theresa May, as Home Secretary at the time, didn’t respond to any pleas on compassionate grounds. Likewise the campaign for Yashika Bageerathi, an A-level student, whose classmates mounted a campaign for her to stay and finish her exams.
We try to focus on evidence relating to Geneva Convention protections and not appealing for compassion, as there appears to be very little compassion

So no compassion no more?
I call it post compassion campaigning. You can’t rely on the Home Office or the government to make decisions on grounds of common humanity. We need to rely on international agreements to make sure that women and children are protected under the Geneva Convention.

What successful campaigns has it achieved?
I wouldn’t say any success really. It feels like the strategy of the Home Office under Theresa May was to shuffle difficult cases to the bottom of the pile. Most of the people in our group waited for a very, very long time for a decision. What has happened while the cases were at the bottom of the pile is that access to legal aid has been limited, so now when people get refused they can’t get legal aid for judicial reviews.
We now we run into the perfect storm of no access to justice and refusals that are not in line with international law.
There has been another development in that the Liverpool council has decided to limit the procurement of new asylum properties, so the support that people had with the resources in Liverpool has been minimized, limiting people’s ability to advocate for themselves.
We don’t underestimate the Home Office. There has recently been a change in the procedures for forced removals. Instead of a fixed forced removal date for the asylum seeker or refugee to be put onto a plane, there is now a ‘removal window’. One of our members has had this done to them recently. You can’t relax as you could go at any moment.
This is also a strategy to discourage any form of effective campaign to get airlines to refuse to carry people against their will. As campaigners get better at fighting removals the Home Office changes its processes in order to keep one step ahead of the campaigners.

So in a way becomes another form of torture?
Well, they have also ‘changed’ the definition of torture in September 2016 http://www.rcpsych.ac.uk/pdf/PS07_2016.pdf.
Past experience has shown that the community is integral to encourage people to talk about their sometimes horrific situations In a safe and comfortable environment, especially for survivors of gender based violence. This sense of safety is essential in order to finally speak about their experience.

What type of events have you staged to raise legal funds for women and children seeking sanctuary in the UK?
We started our work with two productions of the Vagina Monologues in 2012 and 2014. We started singing as a way to include the whole group on stage in 2014. Our creative focus has been the choir since then.
We have also just finished a big photography and performance project but raising legal funds is a difficult issue. When we started six hundred pounds would solve a problem, but now you are looking at sixteen hundred just to get a solicitor for an appeal for one member, and there are twenty people who come to the group every week.
To get every choir member the type of legal representation they need it would cost perhaps thirty two thousand pounds. You can’t raise that with a pot luck dinner, so we are having to look at new strategies.

Really, if you look at anything money is the whole thing most of the time?
After Brexit and Trump the resources of the people resisting the rise of xenophobic nationalism have got to increase.

Well, we discussed this recently at length the rise of fascism in both countries.
Historically everybody understands that austerity is directly related to the rise of all these forms of xenophobic violence and nationalism. What we want to do is look at the root causes of it in people and communities, so that we can learn the lessons that history has taught us and not to let it happen again after Brexit. 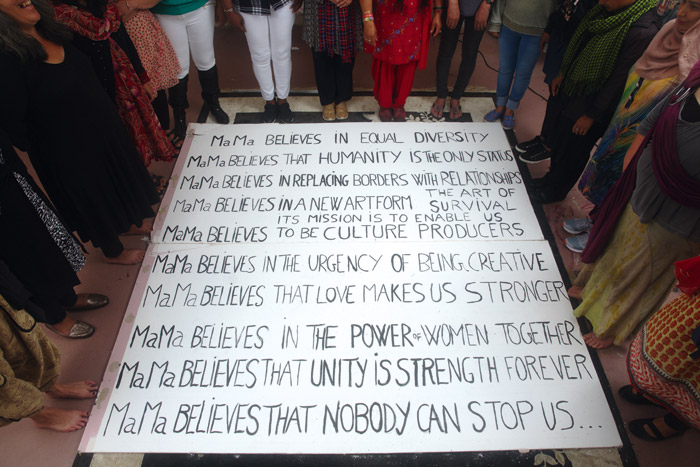 I think this is a good time to talk about about gender-based violence to women. How do you see that women can gain protection from this type of tyranny brought upon them?
The UK government presently is reluctant to recognize legally that states are either directly persecuting or condoning the persecution of women just because they are women.
Asylum seekers fleeing gender-based violence, if they are supported properly, will become global voices for equality and justice. Instead we are locking people up in detention centres, and pushing them into poverty and destitution. If we empower women who are standing up to violence, instead of persecuting them through a hostile asylum system, we will be sowing the seeds for a better future.

What are the artistic aspects of the group including music and the visual art?
The work of the choir is based on a ‘repertoire’ constructed around the idea that songs like people migrate.
We come together with lots of different women with lots of different songs, and our songs become our stories. When we sing each other’s songs the choir and the audience enter into a temporary autonomous zone, a place where we are at home.
One of our songs is an old Bollywood song from a movie called Disco Dancer. goro ki na kalo ki duniya hain dilwalo ki = Neither of the fair ones nor of the dark ones. The world belongs to those with a big heart. It’s one of our member’s favourite songs from her childhood in Bangladesh.
We are also working with a performance photographer, Manuel Vason, creating performance photographs that attempt to capture these complex relationships and emotions.

In regard to choosing solicitors to assist you what criteria do you use in selecting appropriate ones?
Well we have really just had that discussion. Generally people don’t have a choice, but it has to be solicitors who have a good reputation, not for profit, and have policies that protect people who are survivors of gender-based violence

So it’s based on money? A fiscal choice then?
I think I would encourage anybody who is reading this, if people want to understand this properly, talk to someone who deals with legal aid. We have barriers, barriers to justice, and we are trying to break them down. A lot of this is to do with the policy of dispersal. There are fewer barriers to justice in London because of the infrastructure of the non-governmental organisations. Many of these NGOs don’t support anybody outside of London. There are just not the resources.
The fiscal situation is a problem. Someone who lives on thirty five pounds a week can’t afford to get to a solicitor out of their local area, let alone pay for a solicitor elsewhere.
National organizations like Right to Remain try to mitigate the impact of dispersal, but now that Liverpool-based asylum seekers have more resources and infrastructure they are being sent to places like Knowsley or Rock Ferry.

What are your views on how you now see the legal aspects affecting asylum seekers and refugees changing in the next nine to ten months?
Everything is changing so fast at the moment. All I can say is that there are some strong infrastructures in place: the Home Office’s immigration detention and removal system and the migrant justice networks.

What are the future plans for the group?
It is a marathon at the moment and not a sprint. Liverpool Live Aid sounds good.

Previous Post: Art With A Heart
Next Post: The UK Immigration Removal Centres – are there serious flaws?