Alhussein Ahmed is a freelance translator and Sudanese refugee, and he assists Liverpool’s asylum community. Interview by Ashley McGovern

I met with Alhussein at the beginning of a hectic week of political activism. On the Tuesday he was heading to the Houses of Parliament to speak with local MPs at the annual Sanctuary in Parliament event, and on the Thursday he was giving a presentation at a secondary school on the Wirral. Both events would involve his usual passionate defence of the rights of asylum seekers, and a moving personal narrative of his own journey from North West Sudan. He fled from his native country in 2008.
Alhussein travelled through Libya and Europe and finally settled in Liverpool at the end of 2010. Since he was granted refugee status, he has worked for Merseyside Refugee Support Network and Asylum Link Liverpool, two of the major asylum seeker support service charities in the region, as a full-time care support officer and voluntary translator.

He told me about his love for the hospitable nature of Liverpool and how he is a loyal supporter of the local charities that first taught him English and gave him generous work experience. For example, shortly after he arrived in Liverpool, he helped to maintain Asylum Link’s award-winning allotment. He assists Liverpool’s asylum community with full sympathy, saying “I know being a refugee or an asylum seeker costs you personally, physically or mentally and it’s very difficult to rebuild your life in a different country.” Alhussein is well aware of the common feelings of homesickness and trauma shared by asylum seekers.

However, the grassroots embrace of suffering asylum seekers is a different world to that of the UK Border Agency. He explained that “there are two UKs, the official and the community. The official, the government is not welcoming, whereas the community and the people are very welcoming.” He cited the negative examples of the unbearably long and distressing asylum interview process and the Immigration Removal Centres for those whose applications are ultimately rejected, which in 2015 was 65%. 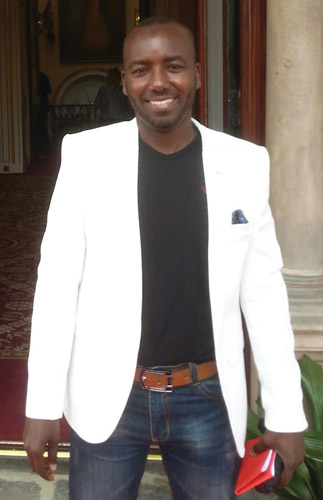 He also argued that the media are a significant force in framing the current so-called ‘migrant crisis’. In his view, the largest share of press attention has fallen on the Syrian Civil War and the diplomatic troubles of the EU in dealing with over a million refugees on mainland Europe. However, there are more stories than Syria, from countries all across the Middle East and Africa.

As he explained his own journey of refuge he continually referred to the more precarious situations of his two younger brothers: Issi, aged 18, and Abdulrahman, aged 15. He is particularly worried about his ‘very vulnerable’ youngest brother, Abdulrahman, and his anxious manner is moving. Though they fled Khartoum, Sudan’s capital city, together, they ended up in very different places. Abdulrahman is now stuck in Cairo, Egypt, a place known for its open hostility towards Sudanese refugees and one of the longest refugee processes in the world.

Unlike European Union systems, he says, in Cairo “it’s more difficult than here. In Cairo, if the United Nations doesn’t help, society will not help you…there is no human rights legislation.” The effects of living with an unchanging ‘yellow card’ (the colour marking temporary asylum) is homelessness and sometimes tragic involvement in sickening trades like organ selling. As an unaccompanied minor in a neglectful bureaucratic system, he fears greatly for Abdulrahman’s safety.

The reason for the tragic separation of the Ahmed brothers is the ongoing trouble in Sudan. Since the bloodless coup of Omar al-Bashir in 1989, Sudan has been in a state of permanent, irreconcilable Civil War. President Bashir is a totalitarian leader, charged with two counts of war crimes and genocide by the ICC, and feared by the Sudanese population as a fanatical believer in an almighty Islamic State.

Alhussein detailed his nation’s recent history. He explained Bashir’s tactic of exploiting ethnic tensions and hosting neighbouring terrorist groups, turning the country into a ‘home for criminal people’. He clearly dislikes the current regime, something he gained from his father, who is a teacher and strident member of the National Umma Party, the largest anti-government party in Sudan.

Yet Alhussein is quick to clarify that his humanitarian activism takes precedence over party politics. He is not a member of Umma Party, arguing simply that “I’m an independent person and act for the rights of refugees and asylum seekers, rights of Sudanese women and children…I’m someone who wants to see his country as a good country, something I can be proud of. No war, no fighting, no conflict. I want to see democracy and freedom in our country and that’s all.”

He remains positive about Sudan’s great natural potential: “Sudan is very rich in terms of agriculture, livestock. It’s not a very industrial country, but the people have enough to eat, we have water and we have the longest river in the world – the Nile.” The real problem is that Sudan has no governmental stability. Naturally, elections are rigged in Bashir’s favour and proposed peace deals – like the Controlled Peace Agreement in 2005, the creation of the two independent states, Sudan and South Sudan in 2011 – have not put an end to ethnic conflict.

Alhussein’s ultimate wish is to return to a reformed democratic Sudan and re-unite with his family. “I have a confidence in the Sudanese people…Sudan is a promising country.” In the meantime, he will continue with his heartfelt activism and his fight to see his two brothers.

(Less than two weeks after this interview, Alhussein received a triumphant piece of news. His younger brother Issi, who had been in Calais’ notorious ‘Jungle’, was finally brought to England to live with him.)