Photo above: Farmland in the Khabur Triangle area of the Jezirah, Syria. Credit – Zoeperkoe

The Doomsday Clock reads 100 seconds to midnight, and according to the Bulletin of the Atomic Scientists we are closer to apocalypse than ever; closer than we were at the height of the Cold War.

Two major threats to civilized human existence loom large, namely the very real possibility of a thermonuclear holocaust, and climate change—both of which are compounded by cyber-enabled information warfare. This is, according to members of the Bulletin’s Science and Security Board, ‘a state of emergency that requires the immediate, focused, and unrelenting attention of the entire world’. But instead of taking steps to tackle this unprecedented existential crisis, world leaders are deliberately ramping-up the threat. Donald Trump has withdrawn from the Intermediate-Range Nuclear Forces Treaty and has signaled his intention to kill the New Strategic Arms Reduction Treaty in 2021, all the while complaining that Iran is in fact the world’s preeminent nuclear threat. As Philip Stephens of the usually sober Financial Times puts it, ‘We are heading for a nuclear free-for-all’.

Meanwhile, as the conservative projections of the Intergovernmental Panel on Climate Change predict mass extinctions, water and food insecurity, war, and increased displacements of people; a recent UN report notes that private sector investment has put fossil fuels on course to be over-produced. World emissions, according to the Bulletin, are going in the wrong direction; and the President of the United States believes that the whole concept of climate change is a hoax. Moreover, authoritarian right-wing ‘populists’ like Jair Bolsonaro in Brazil are taking steps (in this case, the destruction of the Amazon rainforest) to almost guarantee the onset of irreversible climate catastrophe.

How are we best to describe the changes in our climate that are threatening to end the prospect of civilized human existence? ‘Climate change’ describes what is happening to the climate, but it sounds too passive. It makes the whole thing sound like a naturally occurring process of change and fails to identify who or what is responsible for it. The ‘Anthropocene’ is a bit better insofar as it points to the human being as the agent of fossil fuel consumption, but this rather ignores the particular dynamics of the kind of society in which we live. The ‘Capitalocene’, on the other hand, identifies capitalism specifically, and the structural forces that is unleashes, as the main culprit.

According to Andreas Malm from Lund University ‘the prime mover of the fossil economy appears to have been what we might call “fossil capital”, most simply defined as the production of exchange value and the maximization of profit by means of fossil energy as a necessary material substratum’. The capitalist model, which exploits the working class as it exploits the environment in its never-ending search for profits, was spread across the surface of the globe on the coat-tails of imperialism; and the ecological nightmare to which it has given rise is now engulfing the peoples of the Global South. As Naomi Klein puts it: ‘What the climate needs to avoid collapse is a contraction in humanity’s use of resources; what our economic model demands to avoid collapse is unfettered expansion. Only one of these sets of rules can be changed, and it’s not the laws of nature’.

The Kurds in Syria and the Capitalocene

During the war in Syria the Kurds succeeded—for a while—in building a quite decent society in the north of the country, often referred to as Rojava. The theoretical underpinnings of Rojava were set-out by the imprisoned leader of the Kurdistan Workers Party (PKK), Abdullah Öcalan. In brief, Mr Öcalan argues for a model of democratic confederalism which would radically transform social, class, gender, and economic relations. He describes it as a model of ‘grassroots participation’ in which decisions are made by people directly, at local levels. In revolutionary terms, he argues for ending private property and establishing an economy run along communal and ecological lines, ‘not aimed at achieving profits but at responding to the fundamental needs of the society and protecting the environment’. Öcalan acknowledges an intellectual debt to Murray Bookchin, who argued that ‘the notion that man must dominate nature emerges directly from the domination of man by man’ and that in order to begin to tackle the problems of the Capitalocene it is necessary to establish small, relatively self-sufficient human communities based on direct democracy instead of the very thin version of ‘democracy’ now prevalent. 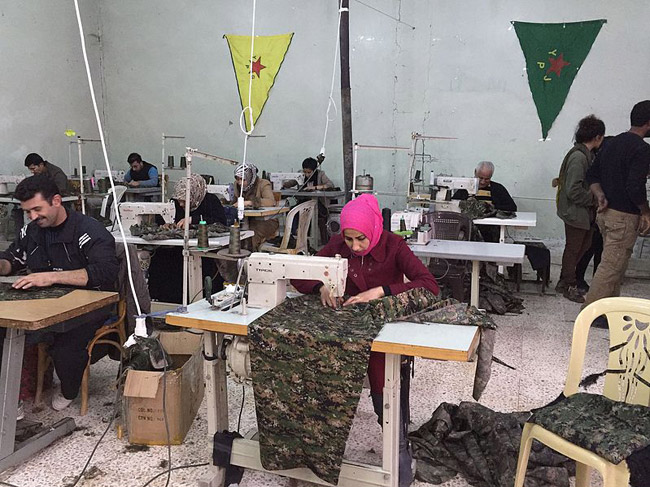 In Rojava’s practice, this led to a councils system with four levels of political participation from the commune through the districts, regional councils, and eventually the People’s Council of West Kurdistan. Ideally, the economy would be entirely run by a series of cooperatives and communally owned institutions, complemented by ecologically sustainable agricultural production. Such cooperatives exist1 in the textiles, dairy, clothing, and baking sectors; and they are run according to ecological principles. There are also women’s cooperatives. In practice, however, the strains of the brutal war in Syria and the ever-present threat (now turned reality) of violent repression by neighbouring Turkey have ensured that these radical elements of the Rojava model always co-existed with certain authoritarian tendencies2 within the ruling PYD political party and with the ongoing existence of a war economy and small-scale capitalism. Nevertheless, the glimmers of an ecologically sustainable alternative to capitalism are there.

It is too early to say what will become of the Rojava project, even as we seem to be entering a dénouement in the Syrian war. But the predicted abandonment of the Kurds by the USA, the invasion of Rojava by Turkey, and the strengthening of the Assad regime combine to create a dark horizon. We may never know what Rojava could have become.

Whatever the eventual fate of Rojava, there is much that we can learn from its experiences. And learn we must, for the clock is about to strike midnight.