Photo above: Peel Ports have invested in new cranes ahead of plans to expand before the transport infrastructure is in place.

Joe Coventry reports in depth on the relentless impact air and noise pollution from the port has on those living nearby.

The Litherland that exists today was once the old Norse settlement Liderlant, mentioned in the 1086 Domesday Book. It’s a hybrid name meaning ‘slope’ in old Norse and ‘land’ in old English. The slope gently dropped down to the sandy Seaforth coastline on the River Mersey. Now it heads pel mel for the huge challenge facing the adjacent communities fronting the Port of Liverpool dock walled estate and its monopoly operator, Peel Ports.

The Docks have traditionally been a major employer in the city: a seven-mile gateway for world trade on which Liverpool has prospered. Now though, activity is massively centred around the Seaforth Container Base complex. Here-in lies the rub. The Container Base is a gigantic undertaking requiring a dedicated road infrastructure which has become increasingly at odds with the needs and concerns of local residents due to environmental degradation which has increasingly blighted their lives.

Step up to the plate Highways England. After cursory public consultation to either upgrade the existing A5036 access road or mutilate the green lung that is Rimrose Valley Country Park, they chose the latter, dismissing building a tunnel in the process as a non-starter. Sefton Council sought a Judicial Review which failed on the grounds that the decision to build the dual carriageway was a political decision, never mind the £70-330 million price tag, or that it was not the first choice of respondents who replied. Since then political activist groups have taken up the cudgel. The bottom line is that the community is increasingly coming under stress from the inability to curb pollution, with no redress or solution in sight.

Uppermost is air pollution. As traffic flows have increased on the existing A5036, log jams of traffic, and HGVs in, have added to the deteriorating local environment. Sefton Council is considering introducing Clean Air Zones (CAZs) to tackle hot spots identified in a survey by environmental consultancy AECOM, where the A5036 intersects the main arteries bisecting it on the approach to the docks. Also identified is the Miller’s Bridge Entrance in Bootle. Such action would be a start, assuming funding from Government, but it is not the final solution surely? Nor is it clear which heavy polluters would bear the brunt of such a measure, which is considered to be a temporary expedient anyway. 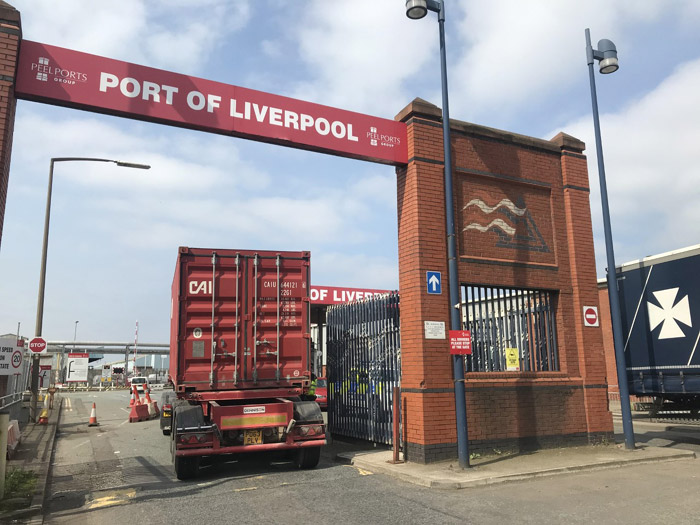 More damaging evidence comes from another survey, that of The British Lung Foundation (January 2020), which found that there are 1000 plus deaths annually which are directly attributable to toxic air pollution levels in the deprived areas of Liverpool. Bad enough, but it’s devastating that the finding ‘life expectancy of school children born since 2011 may be reduced by upwards of 5 months’ has passed with little more than a shrug of the shoulders from politicians or Peel Ports, who see such collateral damage as par for the course. Inaction on combatting illegal levels of nitrogen dioxide (NO2) and fine particulates in fuel, which include dust, ash, and soot, has left Merseyside with the highest levels of lung disease in the country. To say that the Government’s action is tardy is an understatement, but don’t worry, it plans to ban the production of new diesel and petrol cars by 2035. That it does little to tackle the impact now shows its priority is ensuring that big business thrives at the expense of its own citizens. Shameful.

Meanwhile Peel Ports is very big business. It has expanded its infrastructure exponentially with the state of the art, 2017 built, ‘Peel Ports 2’. 10 massive rail mounted gantry cranes and the arrival of 3 ship to shore cranes by 2021 show the extent of their ambitions. In the Canada Dock is a 160-acre steel processing facility for importing and exporting firms. The huge DACSA Corn Mill dominates the Dock Road in Seaforth, while the proposed new Everton stadium on Bramley-Moore Dock awaits planning permission. Dock operations in Dublin, London and Glasgow, the Manchester Ship Canal and Speke Airport are also amongst its assets.

Bizarrely, the monopoly claims that its target of a 40-minute turnaround per vehicle entering the docks is good for everyone. It may be good for its profits and for the wider business community but try telling that to long suffering local residents for whom it is adding only more misery, congestion, and toxic air pollution. The company thus gains at the expense of disenfranchised locals without having to pay a penny for the privilege, while the taxpayer picks up the tab. In plain view its monolithic Martian-like structures, an eyesore in their own right, dominate the horizon for miles around, especially at night when their garish red warning orbs leave no doubt that the remorseless 24-hour activity around them continues unhindered. It means relentless light and noise pollution from container related activities, and scrap metals being worked on outside legitimate hours. This is much to the chagrin of residents, not just in the local vicinity but much further afield causing debilitating sleep deprivation while the powers that be turn a blind eye.

A bit of thinking outside the box might help and an opportunity unexpectedly turns up in the Court of Appeal case earlier this year dismissing the third runway expansion of Heathrow on the grounds that environmental considerations were not taken into account. Excellent news for those suggesting that air travel expansion has already gone too far; that frequent flyers should pay a surcharge and air fuel should be taxed. The review of flight plans for Liverpool John Lennon Airport show that a sustained increase in noise levels will adversely impact the whole of Merseyside, along with the climate impacts we know are an inevitable result of air travel. The same grounds for the Heathrow ruling should be applied here to stop Peel’s environmentally damaging expansion in Merseyside – at both air and seaports – and beyond.