I heard recently about a gifted three-year-old who asked her mother to teach her to read. The mother refused because she was teaching her elder child. By sitting opposite her mother and brother, the child taught herself to read even though, from her view-point, the pages were upside down. I was fortunate: reading was encouraged in our household but I do remember my friend’s parents putting her on rationed reading on Christmas Day, because otherwise she would have devoured all her Christmas annuals and two Famous Five books by the end of Boxing Day. Like I did.

But reading, as knee-huggingly satisfying as it can be, isn’t all there is to say about books. Nor is writing – by the age of nine I had a habit that rivalled Tolkien, about whom one of his colleagues said, “Oh! Not another bloody elf!” I suppose Mr Riley, my teacher, felt the same about me. Books have their own aesthetic, their own claim to be loved as an artefact. I have bought books for their sophisticated charcoal grey cover alone or because they had a secret pocket with a jump-out daisy or because they contained origami paper. I knew a man who used to sniff books in the same way that some people nuzzle babies’ heads and I know people who have cast aside their Kindles to riffle the pages of ‘proper’ books again. So, my love affair with books combined reading with writing plus an appreciation of a book as a desirable object.

An appreciation that began on a negative note.

Not only did my friend Mavis ride a Pink Witch bicycle; she also owned a Five-Year Diary with gold-edged pages and a lock and key. How I envied her! It caused a gradual rift between us and it was Wendy who became my church-going companion. This had nothing at all to do with religion. You had to go to church on a Sunday night before they would let you in the youth club: table tennis, Bobby Vee on the Dansette, brylcremed boys in Italian shoes and highly diluted orange squash. But first we had to find ways of enduring the sermon without biting the prayer cushions. In dimly-lit St Andrews, Wendy and I silently slipped our diaries to one another and, to the accompaniment of the story of the Good Samaritan or the Beatitudes, read one another’s hopes, obsessions and fears, reduced to a set of hieroglyphics and initials. Not for us the prestigious locked volume that Mavis had on her kidney-shaped dressing-table; our leatherette one-year diaries were small, flat and from Woolworths, but that didn’t make the idea of secrecy less delicious and alluring. No, our diaries were a crucial record of the life we experienced at the threshold of adulthood and represented a small claim for privacy in young girls used to sharing a bedroom with two siblings.

My envy over Mavis’s beautiful diary, with its self-important lock, didn’t wane, especially when I found out she didn’t write anything in it, though she did turn and hide the key. Years later, studying Mediaeval Art, I came across those best sellers of the Middle Ages: the individually commissioned and beautifully decorated Books of Hours. Years later still, a friend introduced me to the clear, literate observations of Sei Shonagon’s Pillow Book. These two joys convinced me that the balance of the safe haven of a beautiful book and thoughts (often secret or private) worthy enough to be there, is one of life’s essentials. For me, anyway. 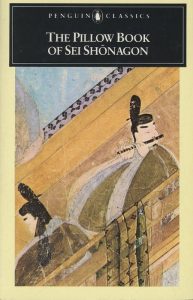 Without knowing anything about Japanese writer Sei Shonagon (966-1025), I presumed that a pillow book was something kept under your pillow, which would be available to record your thoughts at the end of the day. Japanese pillows were solid and would have a drawer in them for such items but in this case the term was more literally precise. Apparently, the Empress Teishi received a bundle of notebooks and she didn’t know what to do with them (life can be hell for an Empress) so her Lady-in-Waiting Sei Shonagon asked for them in order to make them into a pillow. It’s such an intimate and pleasing idea that the pristine books would gradually be filled with her private writing (which was indeed worthy) and that her head in sleep would rest on her expressed thoughts, whilst subconsciously composing her next thoughts. This resonated with the secret frisson my schoolgirl journal had given me. The joy of pillow-piled virginal notebooks composed of exquisite paper would have driven me over the edge.

Sei Shonagon is famous for her 164 lists: Things That Give A Clean Feeling; Things That Lose By Being Painted and Things That Should Be Short, being amongst the most intriguing, and for her descriptions of court life a thousand years ago. Ivan Morris, the translator of the English edition of Pillow Book, calls it, “by far our most detailed source of factual material on the life of the time and … also a work of great literary beauty, full of lively humour and subtle impressions of the world she lived in”.

We have very little biographical detail of Shonagon’s life – even her name is in question – and her work is not introspective. But we do get vivid glimpses of court life, which for her was a combination of domestic restriction (there’s an amusing account of the court ladies having to jump to and sew the Empress’s clothes at a moment’s notice) and aesthetic refinement, as her list of Splendid Things testifies:

Chinese brocade. A sword with a decorated scabbard. The grain of the wood in a Buddhist statue. Long flowering branches of beautifully coloured wisteria entwined about a pine tree.

Shonagon’s appreciation of nature contains jewels of precise descriptive excellence, which pre-empt the Imagist poems of the Twentieth Century:

… when the sun has risen higher, the bush clover, all bowed down beneath the weight of the drops, will shed its dew, and a branch will suddenly spring up though no hand has touched it. And I also find it fascinating that things like this can utterly fail to delight others.

In spring, the dawn — when the slowly paling mountain rim is tinged with red, and wisps of faintly crimson-purple cloud float in the sky.

… but it’s perfect too if there’s a pure white frost, or even just when it’s very cold, and they hasten to build up the fires in the braziers and carry in fresh charcoal. But it’s unpleasant, as the day draws on and the air grows warmer, how the brazier fire dies down to white ash.

… the way a cock will crow first with its beak still hidden under its wing, in a muffled cry that sounds deep in the far distance, but with the growing light its cry will seem to move closer — that’s also lovely.

Where the rain clings in the spider webs that hang in the open weave of a screening fence or draped on the eaves, it forms most moving and beautiful strings of white pearly drops.

Yet Sei Shonagon was only too aware that elegant or beautiful or pleasurable things co-existed, like the ash after the bright fire, with less pleasant aspects of life, which she also lists:

… your lover becomes terribly drunk, and starts coming out with confidential things when he can be overheard.

Hateful Things: a hair on one’s inkstone, a clandestine lover and the dog starts barking.

Although it would be considered culturally unstylish to write passionately, and Shonagon was already criticised by her contemporary, Murasaki, for having, “the impulse to sample each interesting thing that comes along”, the big issues do occur in her writing. Here she lists Depressing Things and the poignancy, and the stories behind her observations, break through:

A dog howling in daytime . . . A lying-in room when the baby has died . . . a letter that didn’t get delivered … a poem written by an elderly person …

The protocol at the Japanese court a thousand years ago is reminiscent of the chivalric tradition in Europe. One custom required that a lover send a Morning After letter to which the lady must reply:

It’s the middle of a fiercely hot day, and you’re finding it impossible to stay cool – your fan only moves the warm air about, and you keep dipping your hands in ice water and moaning about the heat. And then someone brings you a message written on brilliant red thin paper, attached to a flowering Chinese pink, also bright crimson – and you sense how hot he must have felt as he wrote it, and how much you must mean to him, and find yourself unconsciously laying down the fan (that was anyway proving so useless even when plied while the other hand soaked in ice water), your complaints suddenly forgotten.

Here, and elsewhere (“… if someone unexpected responds to the tale of your sorrows with reassuring words, it fills you with pleasure. It’s such a simple thing to do, yet so rare … “)

Shonagon reveals her appreciation of kind consideration and this humanity speaks directly to her (unforeseen) modern audience. The fact that she sometimes wrote unkindly about people is also interesting: partly to do with cultural hierarchy; partly to do with intellectual snobbery; something that makes her wholly human.

The privacy of this Japanese writer was invaded partly through her own indiscretion: she left her diary on a cushion placed for a guest, who carried it off and it was circulated at court.

It is marvellous that we can appreciate what Sei Shonagon wrote privately and for such a cloistered audience. Pillow Book existed only in manuscript form until it was printed in the Seventeenth Century and only after a long and complicated process of publication and translation did it become globally available. It is miraculous that she felt able to write it at all in such a patriarchal environment. As Peter Greenaway commented:

She said two electrifying things from the still darkness of her domestic prisons… she said there were two things in life that were absolutely essential, and life would be unbearable without them: the sensuous body and literature.*

What I have so appreciated in encountering Sei Shonagon is that the original text was handwritten on lovely quality paper: a journal of impressionistic, spontaneous thoughts, combined with a tendency to list-making: characteristics I find in writing my own journal. Also, there is a strand of nostalgia – last year’s paper fan – that I find so resonant as I think of those far-off days when Wendy and I used to write about our fervent love for Paul Anka and our growing fund to purchase Soir de Paris, in its dark blue bottle. Speaking more generally, I leave the last words to Peter Greenaway:

*Peter Greenaway on The Pillow Book in “105 Years of Illustrated Text” in the Zoetrope All-Story, Vol. 5 No. 1