My name’s Charlotte Rudd (Chaz) and I’m a visual artist from the North West. I work across mediums but mostly I’m a photo taker shooting with 35mm film and developing/scanning in my bathroom at home. I’m a photography graduate from Manchester School of Art and now work on both personal and collaborative/commissioned projects (and most recently There’s No Place Like Home, the lockdown charity book).

My past projects studied the everyday as subject matter but lately, since graduating (and having to spend all this time alone) I’ve begun to explore a more constructed/performance-based approach. My current body utilizes my imagination to create fictional storylines and scenarios within the everyday setting, constructing small sets and taking items out of place to create a tinkered version of reality. I try to keep my website and socials updated with my current works*.

Photography has always been a hobby of mine growing up; when I was about 12, I found some cameras around the house and haven’t really stopped since. As I’ve gotten older photography has become a way to deal with the thoughts, feelings and general happenings of life for me. If a situation or certain point in my life has been hard or really good to me a photograph is my way of making that tangible – solidifying it happened – and then helping me move on knowing the story has been told.

Personally, I take better photos on a film camera. You only have a roll or two so every photo counts; it really slows me down with my subject and lets me weigh up the location to see what photo opportunities it and my imagination can muster up. I develop and scan all my photos at home which is a process that I really enjoy. I shut myself in a dark bathroom and get to work with my chemicals – its chaotic but a lot of fun. I’ve always used both digital and film photography, though I must say there’s a bit of elitism when it comes to some film photographers. But I don’t restrict myself to one format over the other. I have time for film at the moment and so that’s what I’m putting out to see. 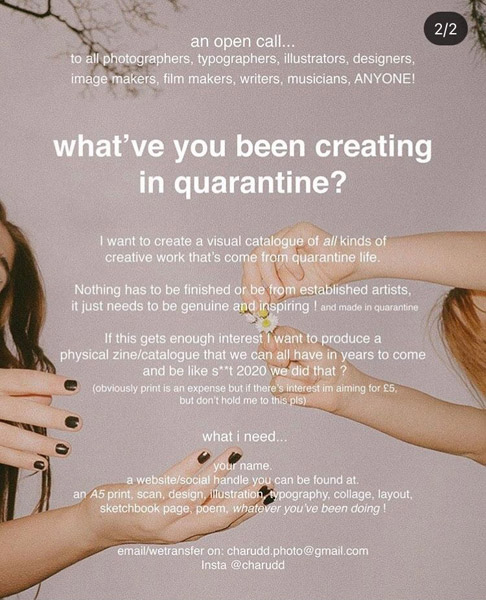 It’s funny but the actual book idea came as I was pruning tomatoes at work. I texted some friends to see if I was being crazy to pull this off during a lockdown and 50-hour work weeks. Next thing I’d put out a poll and had over 30 people respond. So the decision was made! I’d seen a lot of people producing work when we first went into lockdown and I’d been thinking about it a lot. It was as if the restrictions had people trying new mediums and the content I saw was really interesting. Everyone was thinking outside the box to keep inspired. I’m into physical/tangible things so I knew that in order not to forget what was happening in and outside of our homes in this weird old time, a book with all the creative bits would be a really nice reflection/time capsule for 2020.

When I first published the open call I had visions of a small zine – low-key for me and my friends – but within the first day or so I’d received 20 submissions and interest off loads more. I realised this was going to be bigger than I first thought. I tried to use all of what was sent over. Some individuals just sent the 1 piece, others sent me a whole portfolio, so it was only those who sent me multiple pieces that got whittled down in sequencing. On the whole pretty much everything got in the book. I’d learnt all about sequencing at university, so I attacked it with thumbnails all over the kitchen trying to get the pieces flowing visually: considering colours, subject matter, shape etc. The work was great, so it made it surprisingly easy. I had submissions from all over the world, which was cool, the age span being 7 up to the mid-50s! Once I’d hit around 40 submissions, I knew this was going to be a big book and my initial intent for it to be sold for cost maybe needed to be rethought. I got some second opinions and decided it should be sold for a pound or so more, so that a small amount could be raised for a charity while keeping it as affordable as possible.

I’d like to say a massive thank you to everyone who got involved because what started off as a small zine has sold 85+ copies and raised over £100 for charity.

*If anyone would like to see my work or say hello it’s at www.charudd.com and @charudd.