Clearing dead pigeons from your semi derelict exhibition space acted as rites of passage for 80s art students. Followed by the bulk buying of white matt emulsion. Dead Pigeon Art Gallery’s name paid homage to a challenging period that retained hope and dissent. But their aim is to rekindle it.

189 Oakfield Road is a mid-terrace house in Anfield, over the road from the Petrol Station and a few doors down from Home Baked, a big support in setting up the exhibition. The house is situated in what was meant to be a new housing estate developed from all the new builds. It had, until recently, been used as a community hub to gather feedback on the development proposals for the area. It is a short distance from Anfield Stadium, one of the wealthiest organisations in the city, hemmed in by one of the poorest areas in Western Europe. 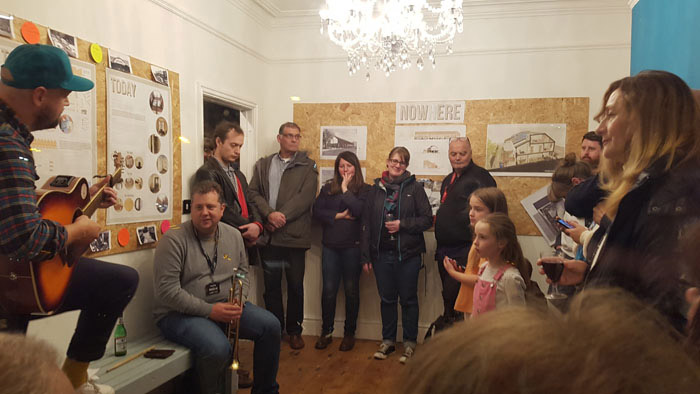 As you peer in through the hedge and double glazing, there is a scene reminiscent of any family gathering. The uncle singing with the guitar, the children dancing in the centre of the room. The oldies sitting at the room’s edge while outsiders vie for their position in the doorway.

This house party atmosphere is deliberate, highlighting the unity and hope of those gathering for local celebration. Celebrating the arrival of artwork, but more importantly celebrating the community. Performers of all ages given equal billing and gravitas.

The artworks, spread throughout the house on the stairs and under, at each turn you discover new work, sometimes passing it by a few times before discovering it. This includes the People will Possess yacht sail on the wall above the stairs. Or Tim’s work presented beneath the stairs, a watery projection finely confined by the skirting board, creating a subterranean world of water. The oil paintings within the box room, also imbued intimacy, especially with more than two people standing in the box room. 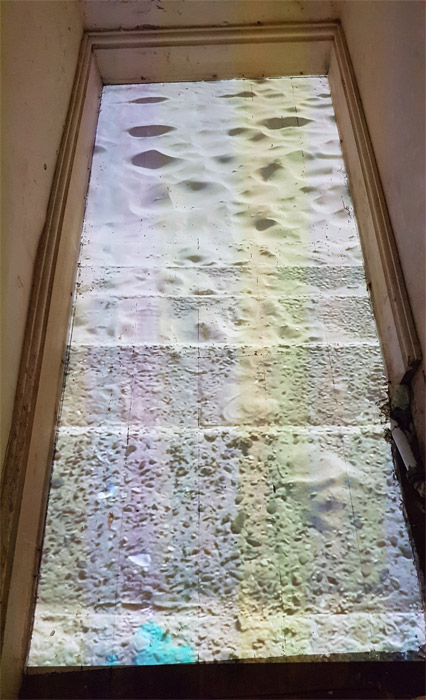 The exhibition consisted of a trove of mixed media installations presented within what has probably been a passion project from many people. The character and practicality of these houses acknowledged and retained.

As you wander across the city you can see the all of the work that is being done, the renovation and gentrification. The studentification to many. You see the ripping down of older more robust structure to be replaced with ephemera. In our life time it will be replaced by the next post architectural city centre fad. Dead Pigeon have not commented but held a mirror to the destructive nature of growth.

Why would you want to knock down a house such as this. It was a home and homely, it wasn’t as had been advertised by the renewal plans a two up two down with no indoor toilet.

Dead Pigeon whispers of what great art should be. It has to empower the community that hosts it. Allow space to express and what that community means, good and bad. So, let’s hear it to more lofts being cleared in the name of stubborn spontaneous creativity.

Viewings can be arranged throughout November and December