There’s growing concern amongst bus users that the re-direction of bus routes planned for January 2020 will mean hardship for those who want to get to the Renshaw St/Lime St area of Liverpool City Centre. Especially hard hit will be those with mobility problems. 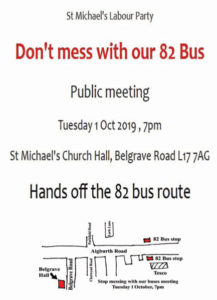 Merseytravel say: “The changes are in response to Liverpool City Council’s £45m City Centre Connectivity Scheme. It aims to transform the city centre, making it a cleaner, greener, more attractive place for everyone, where walking and cycling are more viable options to get around. This will be achieved by improving public realm and changing how traffic moves through the city, reducing congestion and improving air quality.”

Consultation on these changes have been minimal with only an online form and has been carried out after the decision has been made. In other words consultation has been Tokenistic.

A public meeting has been called for Tuesday 1 October in the St Michael’s area to form an 82 Bus Action Group. The main function of this group will be to organise protests to make the Council and Merseytravel think again about the changes. We want a proper consultation which involves the public and all others effected.

The support of the bus unions is being sort because their workers are the on the front line, and bus drivers are likely to bear the brunt of any dissatisfaction from the public with the proposed changes.

If the words of Merseytravel (above) are to mean anything then it is essential the bus service is improved in all areas. Only this will get people to use cars less and meet the councils ‘Climate Emergency’ goal of a drastic reduction in ‘congestion and improving air quality’.