(Image above from the film Winstanley, 1975)

“No man has any right to buy and sell the earth for private gain.” The World Turned Upside Down by Billy Bragg

Recently Channel 4 news ran a news item about how the plans of a group of Scottish villagers to rewild nearby moors was being stymied by the Duke of Buccleuch, the second largest private landowner in Britain. This story shows that any meaningful measures to tackle the climate crisis must include the land being taken off the big landowners for common use.

St George’s Hill, the ‘Common Land’ where the Diggers settled, is now a private estate of over 400 mansions. It has golf and tennis clubs, and the roads and verges belong to its residents’ association. This is Socialism for the rich!

At the time of the Diggers (1649), 30% of land was held in common and they complained that this land was being stolen ‘By theft and murder’, and enclosure meant that their freedom to use open land, a birthright, was being taken away.

Ownership of land has historically contributed to extremes of wealth and poverty. It confers status and political power to individuals. Land ownership encourages speculation and abuse – such as fracking and blood sports. It forces up the cost of housing when there is a shortage, and in this time of climate emergency, it will allow the rich to buy their way out of the worst effects of the global crises, while the poor bear the brunt.1

Today the aristocracy, the corporations and the church – 1% of the population – own half of England.2 And the Royalty, the Lords and the gentry still pass this land down the male line. William the Conqueror carved up Britain for his barons, such as the Grovenors and the Percys, still there today. In 2016, when the 6th Duke of Westminster died, his 26 year old son inherited his vast estates, even though he has two older sisters.

Enclosure of the land (usually for the profitable grazing of sheep) forced people from their homes into towns, where they became factory fodder in appalling social conditions. The aristocracy took this land and added it to their estates, enriching themselves through the wool trade and then further through slavery. 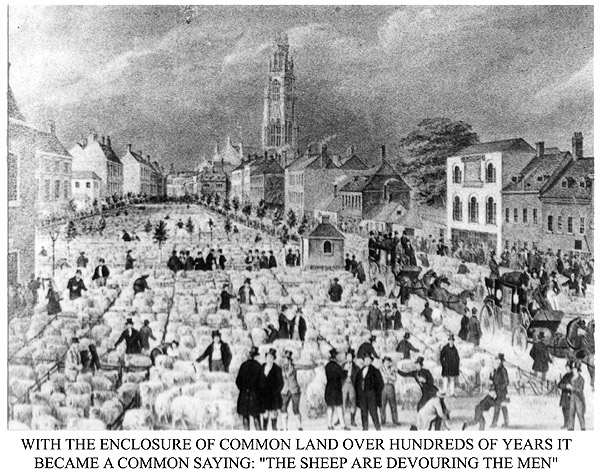 In the eighteenth century the old traditional rights in land were disappearing. There was a rapid increase in agricultural techniques. Sheep and cattle breeding were revolutionised. There were large fortunes awaiting landowners who could expand their land. The rich gentry pushed Enclosure Acts through their Parliament enabling them to seize common pasture, waste land and smallholdings. Towards the end of the century, the enclosures went through at an unprecedented pace.
From: Forgotten Hero – the Life and Times of Edward Rushton by Bill Hunter

Although some of these estates today are open through the National Trust, their owners use this ‘public face’ to avoid paying tax. Much more land is still private, with no- go areas used for their blood sports or for agriculture, drawing down large subsidies. In 2015 the ‘Land Barons’ received £28m, while smallholders aren’t eligible for a subsidy.

Industrialisation and the the dire consequences for the working classes led to a reaction that the ruling class feared would lead to revolution. Calls for reform were put forward, said by some to be the ‘social ransom’; the cost of appeasing the masses, with councils given more power to buy land. A remnant of this are allotments, a strip one twelfth of an acre was enough, it was said, to feed a family of four: (an acre is about two-thirds of a football pitch). And the 1919 Housing Act used this same measure to stipulate that there be no more than 12 houses to an acre.

The 1945 Labour Party Manifesto called for land nationalisation as a “radical solution for the crippling problems of land acquisition…in the interests of agriculture, housing and town and country planning alike”.

When in office however they backed away from nationalisation and instead introduced reforms to planning and taxation. Landowners refused to comply, effectively going on strike. In 1953 the Tories repealed even this.

Over the last forty years huge amounts of publicly owned land has been taken from us through waves of privatisation and austerity. Think of all the schools, colleges, hospitals, municipal buildings, railways and water utility land that is now privately owned.

Land values have increased five-fold since 1995, with the ‘Free market property-owning democracy’ only adding to the housing shortage and creating a property bubble, undermining the ability of younger generations to find affordable homes.

Private companies now own vast tracts of land: 18% in England and Wales! Much of it registered abroad to avoid tax. One of these is Peel Holdings worth £2.3bn and owned effectively by John Whittaker, who lives on the Isle of Man, a tax haven. Peel Holdings have 300 separately registered companies in Britain. They own 37,000 acres of land in 1,000 sites, 150 of these in the North West. They own the Manchester Ship Canal, Salford Quays, Liverpool Airport and most of the Mersey waterfront. Another is INEOS the chemical company, once ICI, whose owner is Jim Ratcliff, Britain’s richest man, who now lives in Switzerland.

Feudalism still exists! Land ownership lies at the heart of our unequal society. Everyone needs access to land for homes and work, so the “Nationalisation of land is a ‘Social Necessity'”. It is the single most important thing for the health and well-being of humankind.

The common use of the land, and sharing it for the benefit of all, is essential. Not to do this will bring, is bringing:

Also see: “land underlies our lives, but its ownership and control have been captured by a tiny number of people. The results include soaring inequality and exclusion; the massive cost of renting or buying a decent home; the collapse of wildlife and ecosystems; repeated financial crises; and the loss of public space.” https://www.resilience.org/stories/2019-06-10/want-to-tackle-inequality-then-first-change-our-land-ownership-laws/