Syrian refugees provide waffles and crepes to the homeless.

Syrian refugee Abd al Rahman Safi, or ‘Safi’ as his friends know him, was shocked after finding a man shivering outside his new chocolate shop ‘Sweet & Cheese’ in Old Swan, when locking up one cold night last week. So much so that he wondered if there was a way he could help the homeless of the city, and to give something back to the city he now calls home. 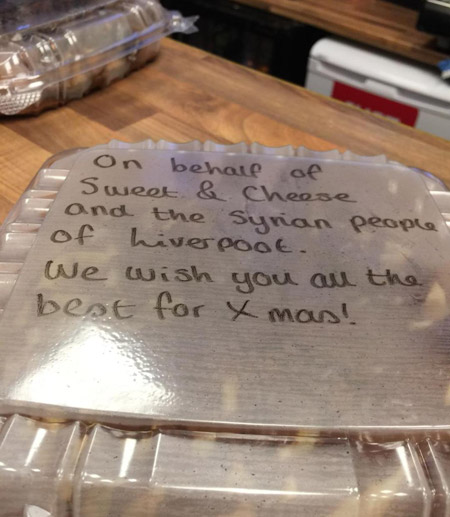 Safi gathered up a group of Syrian friends, all refugees, and decided to prepare and organise the delivery of freshly made waffles and crepes from his shops in Old Swan and Park Road, Dingle to homeless people in the city centre. ‘I see all these guys in doorways, in sleeping bags in this terrible weather and I thought I have to do something, I thought these guys probably never get a chance to have proper chocolate waffles or crepes.’

Safi came to the UK fleeing the war in Syria, ‘I know what it’s like to lose your home and everything, I know the situation is different here but I really felt I needed to do something especially at this time, when people are giving each other chocolates as Christmas presents. My business adviser Darren from GTDT told me about all the great street teams that exist, giving out food and stuff every night, but I figured these guys probably never get anyone buying them chocolates. That’s when I decided I would make dozens of fresh waffles and crepes and deliver them to the guys, every night leading up to Christmas. My first night was Monday night and I got a great reception from the homeless guys. I know there are some great people down there helping out on the street teams, but just thought chocolate waffles and crepes are something I’m really good at and maybe the homeless guys don’t get such a treat.’