There’s no point longing for a tidy garden unless you have loads of time to spend in vigilance. The man who lived next door to my mother could be seen on a summer’s dawn, pulling daisies out of his otherwise pristine lawn. My mother was outraged by this – if he thought by rising early he could do this deed secretly, he was wrong. But the daisy-puller had his own problems: a nagging wife. If he didn’t do his chores then he didn’t get to play the piano: his first love, of which his wife was extremely jealous. My mother almost forgave the daisy-culling because she so loved to hear Debussy – through the parlour wall. Thus a curious interplay of stoicism, fury, jealousy and love was set up, the daisies at dawn being the catalyst.

Gardeners fight a losing battle against the forces of Nature, a battle which creates blacklists of innocent plants on the grounds that they grow too easily wherever they find themselves. Most people regard the idea of daisies and clover in lawns as charming, but if you are a lawn purist – or your partner is – then the mediaeval May Day beauty of the wild flowers is lost on you and you sentence yourself to the gardening equivalent of brushing a yard with a toothbrush.

I’ve just read an article about someone who took a camera to Spitalfields, an area of London where Nicolas Culpeper (1616-1654) set up his apothecary practice, based on local wild plants. In spite of the smothering concrete, the photographer was heartened to find plants still growing wild (or weeds as the local council would call them) and that these were herbs that Culpeper would have recognised. In the days before Super-Pharma, people were totally dependent on herbal cures for their ailments and such plants would be as important as vegetables and fruit in any garden. Culpeper was a hero of the people because, not only did he treat poor people for little or no money, he also demystified the medical profession by translating their recipes into English so that ordinary people could make their own remedies, using plants freely available. We smile now to find that, “Pellitory of the Wall wonderfully helps stoppings of the urine,” but beyond the quaintness lies three hundred years of trust in Culpeper’s wisdom and his masterpiece, Culpeper’s Herbal, is still in print. I’m glad to say that my garden is full of Herb Robert so I don’t need to worry about, “old ulcers in the privy parts”! Phew!

However, even a garden left somewhat to its own devices does need a certain amount of control, otherwise thugs like Russian Vine and Blackberry Bramble will throttle everything and you won’t be able to find your home cures for “green wounds”, or “quinsy and the King’s Evil”. (No I don’t know, either.) 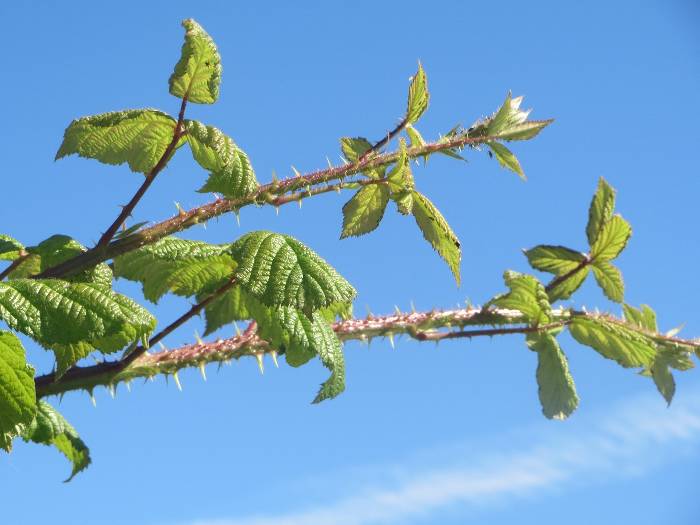 As I carefully harvested the autumn raspberries this week, I realised what an absurd amount of care I had lavished on them (soil enrichment, staking, weeding) when a few feet away, their cousin blackberry was thriving on total neglect. Based on their overnight invasiveness, their tendency to lacerate flesh and their tolerance of poor soil, I had categorised the brambles as weeds and viewed them differently from the raspberries, when they deserved equal respect. I had almost left it too late to harvest them because by October 1st the devil will have spat on them.

Regarded with a different mind, blackberries are wonderful plants. The flowers are silvery white and delicate (with the occasional pink variety) and they form such a contrast with the artillery of deadly spikes, thick stems and robust leaves. As tiny hunter-gathers we went cycling along hedges full of them – from fresh pale green, to pink, to wine coloured, all on the same stem, and we would stop to pick and eat and collect a glistening dark harvest for our mothers to make jam, and blackberry and apple pies. We didn’t know then that there was forensic evidence from the Iron Age that Haraldskaer Woman ate blackberries 2,500 years ago, or that during the American Civil War there would be a truce so the soldiers could collect blackberry leaves to make a cure for dysentery. Nor were we interested that they were low in calories, high in vitamin C, or that loganberries were a hybrid of blackberries and raspberries. What we did like, though, was to say the word drupelet over and over again. Someone – a school swot– had explained that a blackberry was divided into drupelets. Drupelet was just the best word for laughing while juice bearded our chins.

There’s a sequel to Daisygate. My mother told the pianist next door that she loved his music and that she was sad about the daisies. From that point on he left daisies growing, here and there, for her eyes only. The wife never saw them, even though she was looking all the time.