Going With The Flow

Cafe 92°, a bijou coffee house in Liverpool’s arts quarter, has a clientele of uptown trendy types willing to pay a bit extra for an unstressed caffeine infusion. It occasionally also plays host to small art exhibitions hung behind the artisan tables clinging to the periphery of the busy space; as it was on my visit to review Laura Gallego’s first show.

Exhibiting under her nom de plume Gabalau, the now city-based young Spanish artist produces expressively colourful abstract paintings, full of her emotions experienced when ‘in the flow’ of what she is creating.

Her inspiration comes not only through lived experiences but also from cosmic triggers to her psychic sensibilities at the time of conception. The finished works here comprise mainly small acrylic/ink or watercolour abstractions on paper but there are also a few canvas outpourings in the show. 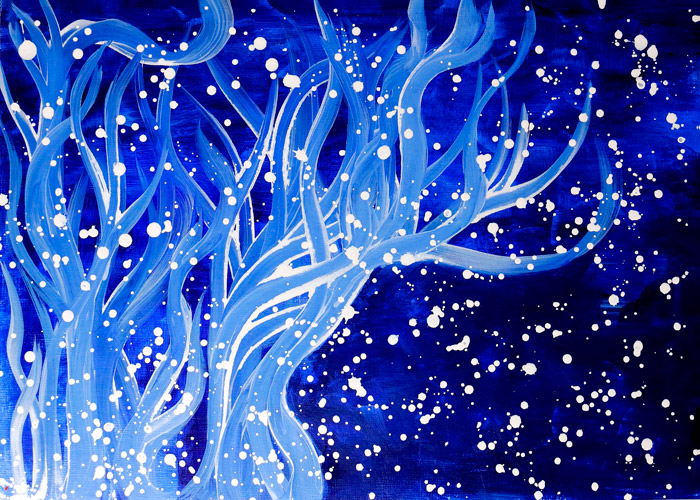 For an overall flavour of what is on display the best vantage point is to sit in the middle of the room and traverse the walls in a 360° miasmal sweep. Amongst the swirls, spatters and explosions of colour emerge blood cell-like structures, ganglia, neurons, expanding star clusters or growths of foliage and trees; then there are naively ecstatic representations of the human form, re-conjured as much in the viewer’s brain as in the artist’s spontaneous free flow of inspirational creation.

Titles like Magical Tree, (red on red), We Are Stardust, Rainbow Rain, (kaleidescopic in nature), What a Beautiful Sunset, (undulating layers of red and blue) and Fuschia Passion (lurid pink), hint at what is being expressed.

There are other deeper philosophical works like Sacral Surrender or Entanglement and the largest piece on view, This Is How I Came, the latter birthed exponentially out of a riot of red and yellow expanding before the eyes.

Although not a large showing this is feel good art inviting the viewer to partake in the spontaneity and fluidity of vibrations resonating in the cosmos.

In other words to go with the flow with what is on show. Enjoy.