Liverpool City Centre and Wallasey Fire Stations are to be closed for 12 hours at night from 10 September. This will leave these areas dangerously low in emergency cover with the response time going up to half-an-hour!

Ritchie Hunter reports on the building campaign to save this fire cover.

A packed meeting in Liverpool on Monday was told that the Merseyside Fire Authority plan cuts, even though they have reserves of £25m. The fire service has already been reduced, and is barely managing, with many of the engines going to calls understaffed. Mark Rowe of the Fire Brigades Union (FBU) told us that when a recent fire aboard a ship had tied up six engines, Cheshire Fire Brigade had to be called in to a car crash in Wallasey, because there was no cover left on Merseyside! The service is on a knife edge, with fire-fighters lives at risk daily.

The meeting heard rousing calls for action in support of the FBU. Labour Councillors, who sit on the Fire Authority, were told to reverse the decision and fund the fire service properly. There was fighting talk from Dame Louise Ellman and senior Liverpool councillors, who unanimously condemned the cuts to public services, and called for a unity in the campaign.

BUT these same people have time and again said there is ‘No Alternative’ to cuts, and have voted them through. So what’s going on? 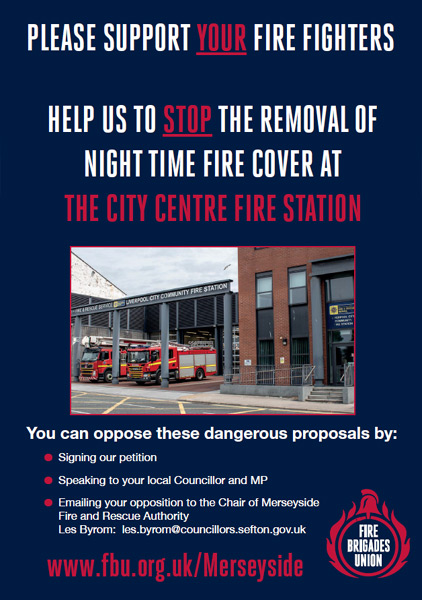 The push from below within the Labour Party has resulted in a big shift in the balance of power. MPs and Labour Councillors are feeling this upswell, and are being forced to take sides. Let’s not be kidded by their rhetoric. They are positioning themselves for their own advantage. They will try to dilute or divert any movement that threatens the established order.

Having said this, there were genuine voices at this meeting who have a track record of fighting ALL cuts.

For information, fliers, posters and a petition: https://www.fbu.org.uk/merseyside
For statistics on fire deaths: https://fullfact.org/health/how-many-people-die-fires/
For a BBC report: https://www.bbc.co.uk/news/uk-england-merseyside-45257121

No doubt this campaign has created a large response. People where I live in Aigburth are horrified that this cut can be contemplated.

This is winnable, there is the money there.

What we need to unpick what people implementing cuts like this always say: There is no alternative to making this cut. “If it’s not done here then somewhere else will be cut!”

LATC reject the TINA argument. There is money, it’s being directed towards the business model of privatisation.

If our elected representatives who sit on bodies of authority won’t give a lead against the Tories then we need to consider how we can stop cuts. This may mean civil disobedience. We to be prepared for this!

We need to join up the dots and stand up to All cuts and privatisation, not just individual ones that catch the imagination.

Whether it’s the fire service or the Woman’s hospital, libraries or prisons. We need to demand an end to all cuts