Minnie Stacey looks at the environmental impacts of the US military

‘The effects of nuclear bombing and nuclear testing, the use of Agent Orange, depleted uranium and other toxic chemicals, as well as land mines and unexploded ordinance lingering in conflict zones long after the war has moved on, have earned the US military a deserved reputation as “the greatest single assault on the environment”. It has been estimated that 20% of all environmental degradation around the world is due to military and related activities, much of which of course has involved the US and the UK.’ Elaine Graham-Leigh

Our planet is set to warm by at least 1.5C degrees by 2030. In February 2020, 18.3C was the highest temperature ever logged for Antarctica and 0.8C higher than the 17.5C recorded in March 2015. Seas around Thwaites Glacier’s ground line there are 2 degrees above normal freezing. If it melts, World sea levels would rise by almost three feet, so it’s nicknamed ‘The Doomsday Glacier’. Scientific research sees sea level rises hitting 2 metres by 2100, displacing up to 187 million people globally.

Driven by Capitalism, fossil fuel use threatens all our lives. The US military admits to using 395,000 barrels of oil daily, making it the World’s largest consumer. It’s closer to a million barrels if you include oil use from military contractors, weapons manufacturing, plus secret bases and operations. The US military is present in all 50 states and at least 40 foreign nations.

US Brown University’s Watson Institute research calculates that US military emissions since the global war on terror began in 2001 have been a climate-changing 1.2 billion metric tons of greenhouse gases – equivalent to the annual emissions of 257 million passenger cars, more than double the cars currently on US roads. Over 400 million of these metric tons are directly due to war-related fuel consumption. The Pentagon won’t acknowledge that its own fuel use is a major contributor to climate change.

However the Pentagon understands that climate change is a threat, with sea level flooding a major concern for its military bases. Diego Garcia in the Indian Ocean, infamously leased by the UK to the US, was used to launch invasions of Iraq. It refuels jets for use in southern Asia. The entire atoll is no more than two metres above sea level and houses 1000 troops. Kwajalein, another atoll base, is projected to run out of fresh water supply by 2035.

Greenhouse gas produced by military action was excluded from emissions targets in the 1992 Kyoto Protocol. It was included in 2015’s Paris Agreement but it still isn’t mandatory for signatory countries to track and reduce their military carbon emissions. Instead of a multi-billion dollar peace dividend, the US military industrial complex leads the World in flinging finance for hot and proxy wars into a climate-change riven globe. Toxic pollutants from warfare and trash burning in Afghanistan alone have caused chronic illnesses in civilians and US veterans. The deforestation of Afghanistan was accelerated by the war there.

Lenin called the catastrophe of the First World War a ‘mighty accelerator’. It caused the food supply system of Tsarist Russia to collapse. This combined with heavy floods in the spring of 1917 led to a second revolution. In 2014 Nafeez Ahmed publicised a report written and endorsed by senior retired US generals, which described climate change as a ‘threat multiplier’ and a ‘catalyst for conflict’.

In 2019 a new US Army report concluded that climate change is on track to create an unprecedented catastrophe leading to the total collapse of US society. It also warned of future foreign interventions in Syria-style conflicts triggered by climate change impacts. For example, 40% of US army operating costs are spent on water, and, in a climate-changed future with even less local water resources available in conflict zones, the immense amount of bottled water required to be transported there could lead to mission failure.

Nafeez Ahmed writes in Vice, ‘Bizarrely for a report styling itself around the promotion of environmental stewardship in the Army, the report identifies the Arctic as a critical strategic location for future US military involvement to maximise fossil fuel consumption’.

Very small modular nuclear reactors (vSMRs) and even micro-reactors are being built and tested in order to support US army deployment and its power demands across the globe. These are designed to be ‘cooled passively by the environment and meltdown-proof’. What could possibly go wrong!?!

Commander in Chief Trump’s America has no policy to address climate change. It locks protections for fossil fuel industries into trade deals. Like in Iraq, industrial warfare guzzles oil and is waged to exploit fossil fuel and mineral resources further. The US military is a disaster of denial – seeing climate change while exacerbating it exponentially. The Pentagon hides data that would amount to fuel emissions alone the size of a country like Portugal. 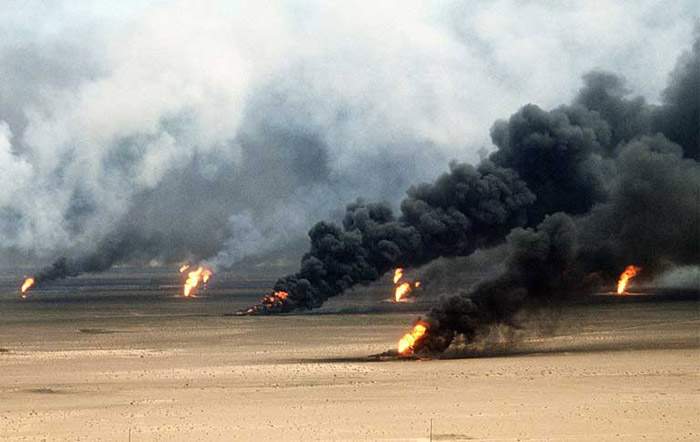 War does more than consume gasoline and jet fuel. Pictured here are raging oil well fires outside Kuwait City in the aftermath of Operation Desert Storm; the fires added significantly to atmospheric carbon emissions. The wells were set afire by retreating Iraqi forces to keep the rigs out of U.S. hands. Photo by Tech. Sgt. David McLeod / DoD in the Public Domain

As the US military attempts to green aspects of its operations with renewable electricity being used on bases soon to be flooded, it’s locked itself into hydro-carbon weapons systems for years to come. Cinder from Australia’s choking bush fires was dropping into the audience’s drinks on the balcony at Sydney’s sea-level opera House. Without systemic change, America and Capitalism’s titanic axis will soon have burned, starved and sunk the World.