Countdowns are pieces of popular theatre creating false excitement and there’s such a temptation to link the notion of a Doomsday Clock with comic-book images such as BOMB and SWAG BAG and cloaked assassins and Reeves’ and Mortimer’s frying pan, but the Doomsday Clock is far from hilarious or false. It’s a surrealist image of the quarter-to-midnight sector of a clock and the time is adjusted to reflect human-made threats to the Earth. This is not a question of linear time: it can move backwards and forwards depending on the gravity of situations.

The clock, inaugurated in 1947, and internationally recognised, was first set at 7 minutes to midnight and has been adjusted each January by the Bulletin of the Atomic Scientists, a non-profit organisation concerned with science and global security issues. It was established in 1945 by former Manhattan Project scientists following the bombings of Hiroshima and Nagasaki, which ushered in the nuclear age. 1953 was one of the lowest settings: at two minutes, reflecting the time that the US and the USSR began testing nuclear weapons. Since then it has moved about but was placed again at two minutes in 2018, following the nuclear shenanigans of Donald Trump and Kim Jong-un. At the moment, it stands at 100 seconds to midnight, the first time in 75 years that the danger has been expressed in anything other than minutes – and that’s alarming enough! 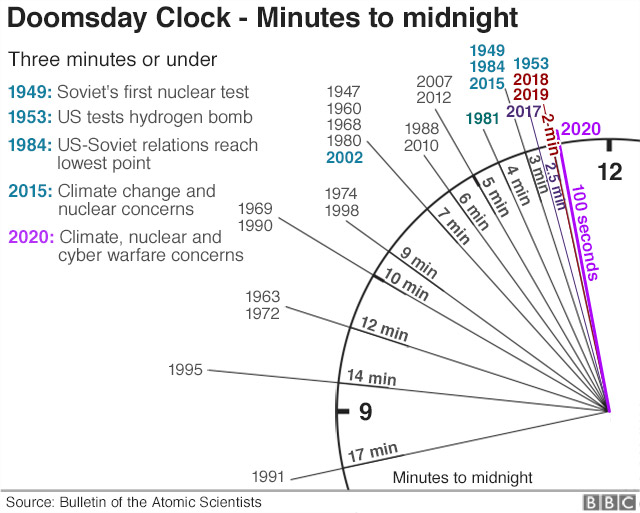 In addition to the proliferation of nuclear weapons and global warming, the Bulletin concerns itself with dangers associated with information warfare and disruptive technologies, which can ferment political aggravation and contribute to global instability.

“The resulting falsehoods hold the potential to create economic, social and military chaos.” Robert Latiff, a member of the Bulletin’s Science and Security Board.

Thus exacerbated, the current acceleration is pretty alarming, and the Bulletin was adamant in its accusations of world leaders.

“We must see an immediate end to the investment in and exploration of fossil fuels. We must heed the demands of the young people on our streets and listen to the science. We cannot negotiate with nature.” Ban Ki-moon, former UN Secretary-General and Deputy Chair of the Elders.

In spite of the fact that the Bulletin is an august body, including 13 Nobel Laureates, chaired by Mary Robinson, ex-President of Ireland and former UN High Commissioner for Human Rights, we know certain leaders will refuse to heed the best minds in the world, let alone a conceptual clock. But does the Clock hold any sway with ordinary people or does it belong with all those other impossible to conceive statistics, such as the utopian, “all we need to do is plant a trillion trees, folks,” or the apocalyptic, “oceans are warming at the same rate as if five Hiroshima bombs were dropped in every second ”? These are so far out of our range of comprehension and so terrifying that we might be in our own state of denial over the ticking clock, and consider it a mere gimmick. It’s only when you research the history and status of the Doomsday Clock that you take it seriously.

Previous Post: Sounds of a Dying Planet
Next Post: To those who wake in the night worrying about the climate crisis