The climate crisis is something most people are aware of. Rather than being an abstract concept outside of everyday life, the effects of environmental destruction are becoming more and more apparent, with huge natural disasters happening all over the globe every year. Increasingly, people are starting to realise that something must be done to prevent a global catastrophe before it is too late. However, as we all become so swept up in trying to solve the problem, it is easy to overlook the underlying cause: the capitalist system itself, and the innate contradictions which it contains. This has lead to the crisis of over-accumulation, whereby the market is flooded with capital and so new sources of profit must be sought, leading to merciless exploitation and environmental degradation. Now, the corona virus pandemic has changed the shape of the socio-political environment, giving an opportunity for reflection and a chance for action.

Earth Strike Merseyside has been formed by a collection of people from a range of ages who have come together due to one core belief: that a system based on the exploitation of the many by a very select few will never address the climate crisis. Not only is it not in their interest to do so, but their very actions are what is driving the crisis itself. Therefore, we cannot rely on the system to change itself. We must demand and create these changes ourselves if we are to keep the planet intact whilst improving the lives of those poorest in our society. This is why Earth Strike is openly anti-capitalist and anti-imperialist.

To understand the role that the capitalist system plays in destroying the environment, just look at the actions of the banks. The British bank Barclays has been pouring billions into the fossil fuel industry, funding one of the main causes of global warming. Whether this is done out of carelessness or out of malice on an individual level, we cannot know. But on a systemic level, it is simply within their interests to do so. To Barclays, the only thing that matters is profit; a view of the world that has no consideration for the damaging effects they will be responsible for. 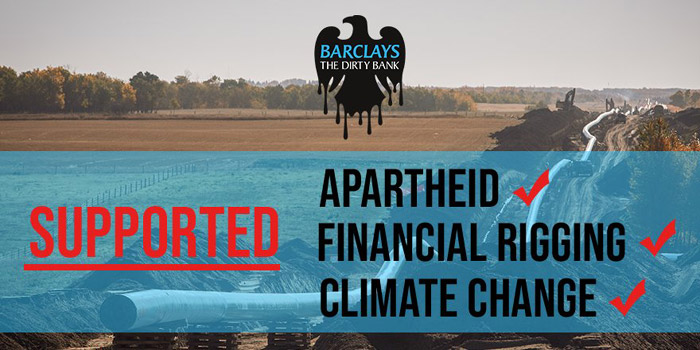 Barclays have been targetted over their investments in a whole host of harmful activities over the last few decades. Credit – Greenpeace

HSBC is another culprit, funding Indonesian companies that continue to burn down huge areas of pristine rainforest to replace them with palm oil plantations. One third of CO2 emissions come from burning forests, but as palm oil is such a lucrative commodity, the world’s natural defences against global warming are being set alight to make a few people rich. 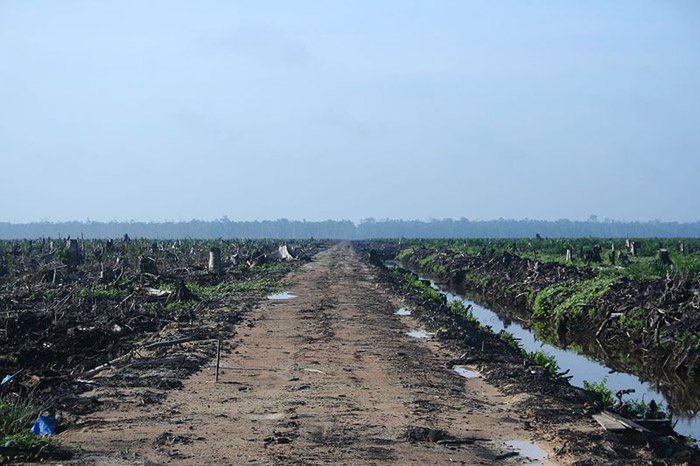 Forests are decimated for oil palm plantations with devastating consequences, as shown here by this picture of an oil palm concession in Riau, Sumatra. Credit Hayden 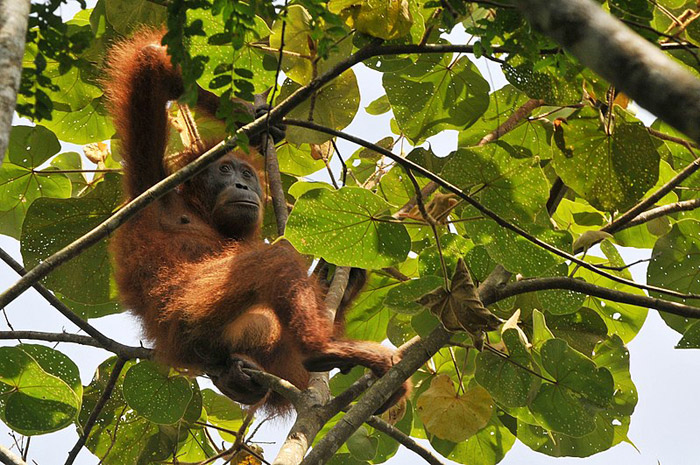 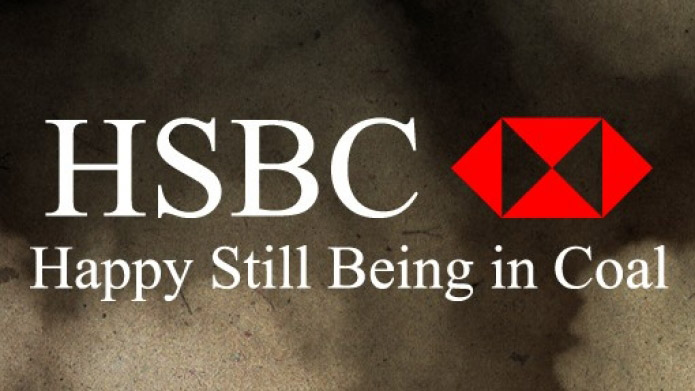 HSBC has been criticised for funding deforestation by investing in companies involved in palm oil production, and dragging its feet on divesting from coal. Credit – BankTrack

As the system relies on less developed countries such as Indonesia to allow such destruction to happen in the name of profit, the richer nation states are also to blame. Since developing countries are desperate for whatever financial help they can get, they become reliant on loans from developed countries and the International Monetary Fund (IMF). As a result, they are kept in a state of enslavement through debt, meaning countries are forced to implement Structural Adjustment Programs* that allow the further exploitation of their natural resources at the lowest price possible. Not only does this result in methods of resource extraction that are extremely harmful to the planet, but also the exploitation of workers within these countries, with workers being paid next to nothing for the work they do. One look at the coltan industry in central Africa, where children are forced to work at gun point to mine minerals that are essential for the construction of electronic devices, including your mobile phone, demonstrates the reliance rich countries have on slavery to get access to cheap resources. 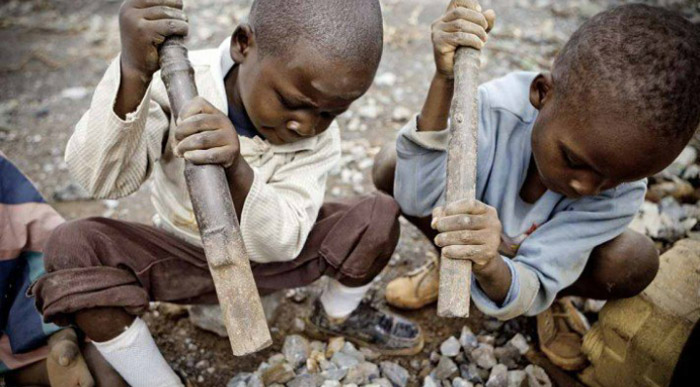 Children mining in Congo, the centre of the Coltan mining industry, which is associated with fuelling conflict, child labour and other human rights abuses. Credit Jclaboh

This system has been rigged from the start, with colonialism having plundered countries all around the world of their natural resources, leaving them in a state of underdevelopment. Many of these countries are still rich in natural resources but are forced to sell them in their raw form as cheaply as possible just to pay off debt. As a result, they cannot develop to their full potential and must take out further loans, leading to a bitter cycle of enslavement. This economic dominance of developing countries is tantamount to neo-colonialism and must be challenged if we are to deal with a problem as complex as the climate crisis.

Clearly the government and multinational corporations cannot be relied upon, so it is more important than ever that the people take matters into their own hands. At the 2019 United Nations Climate Change Conference (COP25), we truly saw the ineptitude of nations in addressing the problem, with decisions made about emissions and the carbon market being put on hold for an entire year. The director of Strategy and Policy for the Union of Concerned scientists remarked at how he had never seen such a disconnect between what the science requires and what the negotiations had delivered in terms of action.

The next event, COP26 has been delayed a further year due to the virus, meaning another vital year of progress has been lost. The events of the pandemic give an opportunity for reflection. To reduce the heating of the climate and avoid catastrophe, we needed to reduce carbon emissions by 7% compared to 2019. A recent study from the University of East Anglia has shown that global carbon emissions have dropped a record 17% since the start of the lock-down, proving that with the reduction in travel and industry, it is possible to reduce emission levels low enough. However, this 7% reduction must be maintained yearly. As there has been no permanent structural change yet, the levels are likely to increase rapidly.

With such huge global events shaking the establishment, it is time we push for a system which fulfils the needs and freedoms of every human being whilst being able function in an environmentally conscious way. We must expect nothing less than the full, unconditional abolishment of 3rd world debt, so as to allow those countries to be able to develop in a sustainable way, rather than in a way that inevitably leads to environmental destruction and a cycle of enslavement. Not only this, but it is vital that policies truly reflect the scientific data, with no compromises on becoming completely net carbon neutral by 2030. Any longer would simply be too late.

*Structural Adjustment Programmes consist of loans provided by the International Monetary Fund and the World Bank to countries that experience economic crises. The two institutions require borrowing countries to implement certain policies in order to obtain new loans (or to lower interest rates on existing ones). These policies are typically centred around increased privatisation, liberalising trade and foreign investment, and balancing government deficit. The conditionality clauses attached to the loans have been criticised because of their effects on the social sector and environment.1 Essentially the loans come at a price: necessitating the opening up markets, removing subsidies that protect the local economy and generally adopting neo-liberal capitalist policies.