By Liverpool Hunt Saboteurs
(Image above: Mike Hill cared deeply about injustice and cruelty towards animals and humans alike)

30 years ago today, on the 9th of February 1991, hunt saboteur Mike Hill was killed at a meet of the Cheshire Beagles. Towards the end of the day’s hunting, with sabs having prevented any kills, the huntsman boxed up his hounds in a small blue trailer being towed by an open-top pick-up truck. The kennel huntsman, Allan Summersgill, along with another man, jumped into the pick-up and on impulse, three sabs who were nearby, jumped onto the back of it to prevent them driving the pack to another location to continue hunting. Summersgill drove off at high speeds down winding country roads for 5 miles with the terrified sabs clinging onto the back. It is thought that Mike jumped from the pick-up as it slowed to take a bend but failed to clear the truck properly and was caught between the truck and the trailer, which crushed him. Mike died where he lay in the road. 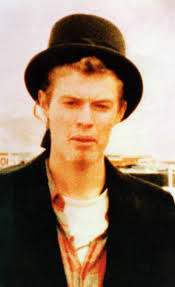 Despite the thud, and the screams of the other sabs, Summersgill continued driving for a further mile. The truck only came to a halt when one of he sabs smashed the rear window of the cab. The sab was hit with a whip as he tried to stop the truck. Once it had stopped one sab ran back to Mike’s prostrate body while the other ran to a nearby house to call for an ambulance. Summersgill drove off. He later handed himself in at a police station. No charges were brought against him and in a travesty of justice, a verdict of accidental Death was brought at the inquest.

Here, a longstanding member of Liverpool Hunt Saboteurs remembers Mike, and the extreme violence that sabs were met with generally throughout that period. Violence which, although to a lesser extent, still continues to this day.

Mike cared deeply about injustice and cruelty towards animals and humans alike. A naturally kind and caring person who was willing to put hard work into fighting for what he believed in. He loved being with animals and doing rescue work. It was a natural thing for him to get involved with the anti-hunt movement. We would talk about the danger of disrupting the hunts. Sometimes we would make light of it as a coping mechanism but very often the conversation would focus on who was the latest person to be attacked or what we could do to protect ourselves.

So although it was a shock to hear that Mike had been killed, it came as no surprise to most of us. In fact it was a miracle that we had survived the violence for so long without a fatality. The shock wasn’t just because he was a friend but because Mike was such a gentle and compassionate human being. The violence in Cheshire and North Wales towards anyone opposing hunting had been relentless for years and continued at a high level for many years after Mike’s death. Hunt Saboteurs were particularly hated by the Hunt and their often psychopathic supporters, many of whom ended up going to prison for violent crime, rape and child abuse unrelated to hunting. As for crimes against hunt saboteurs, the police turned a blind eye to even the most extreme use of violence. There was no let up after Mike’s death and the hunt supporters would regularly chant ‘One Nil, One Nil’ at us. As far as they were concerned Hunt Sabs were a thorn in the side of the Hunting establishment and they were determined to literally beat us into submission. Pick up trucks would pull up full of masked men brandishing iron bars, golf clubs and baseball bats. They would lay into anyone they could get hold of. One follower would regularly single out a sab, produce a shotgun and tell them he was going to kill them as soon as he could get them on their own. A Liverpool sab was held down and had his legs broken with stone boulders. A particularly violent hunt supporter was nicknamed the Grim Reaper as he would follow us wearing a long hooded jacket, often carrying a scythe. The attacks over the years were relentless and yet Mike and other brave people continued to save the hunted animals and expose the hunters as elitist sadists. The police were always there to help protect the hunt with no regard to the crimes they were committing or the terrible cruelty they were inflicting upon the animals. 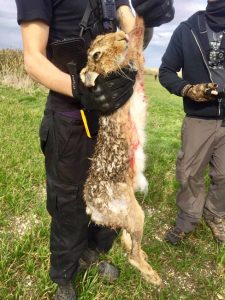 It would be easy to single out red neck psychopaths as the source of most of the violence but the rich and powerful would regularly get involved. Judges, Lords, famous horse trainers and ‘celebrity’ jockeys were all part of the violence. The riders would use their horses as weapons or the metal ends of their riding crops to split our heads open as they rode past. The use of vehicles to drive directly at sabs was probably the most cynical attempt to hurt sabs. They would laugh when you managed to dive out of the way and when they struck a sab they would claim you had stepped out in front of them without looking. They regularly covered their vehicle number plates to avoid identification. The police did almost nothing to prevent them. The violence didn’t stop at the scene of the hunt. The homes of hunt sabs in Liverpool, Manchester and North Wales were targeted by hit squads. Homes and vehicles were smashed and sabs viciously attacked. Dead foxes and other animals were nailed to front doors.

The violence from hunt staff and supporters has never gone away although it is less intense than it used to be. Every year sabs are still attacked, hospitalised and some are lucky to have survived their injuries. The fact that we have smart phones and Go pro’s means we can record and expose the hunts in a way we never could when Mike was sabbing. The police and the CPS are almost as biased as they ever were and have to be shamed into taking any action against the hunts. However, the hunts are steadily losing the battle. Prosecutions slowly mount up and public opinion is still on our side.

Mike would be proud of all the hunt sabs that have kept on fighting against animal cruelty. We knew it was going to be a long struggle and the price we have paid has been great. Mike should always be remembered for his gentle kindness, compassion and because he made the world around him a better place. 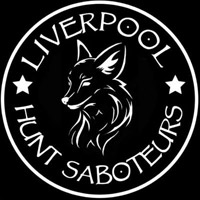