28th April is International Workers Memorial Day, when annually around the world those who have lost their lives in the work place are remembered, while safety in the workplace – or lack of it – is highlighted to protect the living.

We heard today that UK leaders have joined millions around the country in a minute’s silence to remember all those key workers who have died with Covid-19. More than 100 NHS and care staff have died with the virus, as have many transport and other key workers. There is no mention, however, in the mainstream reporting of this event, that today is International Workers Memorial Day, no mention that avoidable deaths in the work place are in fact business as usual. We hear daily of health staff and other key workers dying in the work place due to a lack of protective equipment. Death in the work place due to negligence is not unusual, however, it happens in work places in the UK and around the world every day.

Every year more people are killed at work than in wars. The Health and Safety Executive reports that, in recent years, the average annual number of workers killed at work is 142. This statistic is a huge underestimate however, as it records only incidents reported to the HSE and Local Authorities, under Reporting of Injuries, Diseases and Dangerous Occurrences Regulations ( RIDDOR). It excludes members of the public killed in work incidents, workers killed on roads, at sea, in air and by work-suicide. The figure also excludes those dying because of bad work conditions from cancers, heart, lung and other diseases. There were 2,523 deaths in 2017 from mesothelioma, a cancer caused by asbestos exposure – a very jarring example of work related deaths not included in HSE figures. The Hazards Campaign estimates a more realistic figure for those killed in work-related incidents is 1,500 and those dying of work-related illnesses is 50,000 per year. The United Nations International Labour Organisation estimates 2.78 million people worldwide die from work every year.

This year, deaths associated with Covid-19 are an obvious focal point for International Workers Memorial Day, its is a most pressing issue globally, affecting almost everyone and so on many peoples’ minds. It also serves to highlight the importance of safety at work more generally, a much neglected issue. The Workforce Movement has organised a Corona Virus Global Day of Action making the following demands:

We are hearing daily about the problems in getting PPE to the front line for all workers. Here in Liverpool people are self-organising via the Liverpool Covid-19 Mutual Aid Group to supply protective equipment for local front line staff with people making DIY PPE equipment or ordering in bulk from overseas. If the government can not fulfil this most simple and basic of tasks in this situation, and local communities are stepping in to fill the breach, we must question both the competence of this government and its ability to rise to this and other challenges. It must also must cause us to pause and ask what, then, is the point of government, and to question our reliance on government to solve our problems. 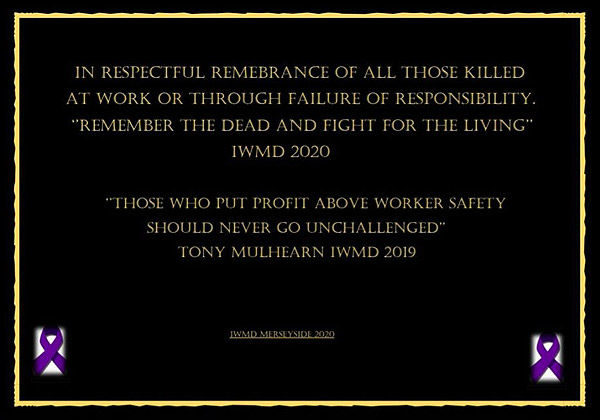 We’re all being told to stay at home and only to go outside if it is essential to do so. We’re told to work from home if we can. But people are leaving their homes for non-essential work in construction, the service sector and industry which undermines the lock-down, fuels the pandemic and puts workers and their families at risk.

The Department of Transport – with the banner on its website calling on people to ‘Stay at home, protect the NHS, save lives’ – has approved the controversial HS2 high speed rail link to issue Notice to Proceed (NtP) to its main civil contractors. The controversial project has been highly criticised for the trail of destruction it is already wreaking on natural habitats along its route, including ancient woodland. Locals along the route are furious that the safety of local communities is being put at risk by allowing workers to come into their locale from outside the area, putting all involved at risk.

The construction site of Tees “Renewable” Energy Plant – which will drive forest destruction through its burning of wood – has also announced it will re-open. Redrow Homes announced today it will be getting back to work soon, many other companies never stopped work in the first place. This is all despite serious health risks since social distancing cannot be guaranteed in construction work.

HS2’s justification for proceeding is that ‘it’s a major boost to the construction sector, securing and creating thousands of jobs, particularly for small & medium sizes businesses across the UK’. What better time than this moment – when many people are discovering new ways to work and communicate – to question the need for this huge, costly project. Ploughing ahead with planet-wrecking infrastructure projects to keep the wheels of capitalism turning is not ‘essential work’. In fact it is this current economic system which sees workers, the old, the vulnerable, animals, wildlife and nature as disposable which is threatening our collective existence, through its contribution to ecosystem destruction and climate change, which will ultimately kill in far greater numbers than Covid-19.

#PayEveryWorker – Full pay guarantee for all workers who cannot work

Instead of putting people back to work when doing so puts themselves, their families and others at risk, full pay should be guaranteed for all workers who cannot work. Social security – what a novel idea!

Here on Merseyside International Workers Memorial Day is usually commemorated with a wreath laying at the Mersey Tunnel Memorial – where the 17 men who died during the construction of that tunnel are remembered. The building of the second Mersey Tunnel claimed another 4 lives. This year a virtual ceremony was held, featuring the traditional ‘Piper’s Lament’ and minute’s silence which can be viewed here: https://www.unionsafety.eu/

A plaque to honour local trade union campaigner and life-long socialist Tony Mulhearn, who spoke at last year’s event, has also been created which will eventually be erected on the building in St George’s Plaza, next to the Mersey Tunnel Workers Memorial, and a suitable ceremony to honour the occasion will be held. You can listen to Tony speak at the IWMD 2019 Liverpool event, and read a tribute to him here: https://www.unionsafety.eu/

Let’s today remember ALL workers who have lost their lives due to the failure of their employers to protect them from harm. Let’s fight for the living, in particular those working on the front line in this current health crisis. Let’s hold the government to account for its failures. In the words of Tony Mulhearn “Those who put profit before worker safety should never go unchallenged”.