Face masks are all the rage now, to protect us from something we can’t see, but that can lead to death, Tom Bottle discusses how their use highlights another silent killer: Air Pollution.

A cyclist’s face mask costs round £30. They can look cool or scary, and it may be tricky getting the seal around your mouth air-tight to keep out those air pollutants. Beards are a problem, and the straps may pull on your ears. But check the filter at the end of a week and that impressive black filth is pretty convincing. Best place to wear them though is in a car, chugging fumes in traffic that hasn’t moved for ten minutes, because that’s when mum, dad and the kids are most likely to breathe in air pollution. Not walking, not cycling, not on a bus but in your car. It’s other cars. Diesel causes 30 times more pollution than petrol. It used to be factories causing air pollution – now it’s cars, mostly.

Air pollution is contamination caused by poisonous gases, the burning of fossil fuels and vehicle emissions. It can stunt the development of children’s lungs so they won’t be able to breathe properly as they grow up. It’s not good for the rest of us, either. Researchers the world over are saying this, claiming air pollution can affect every organ in the body because very fine particles penetrate the lungs and are carried through the bloodstream. Dr. Sandra Davies, Liverpool’s Director of Public Health, has said, “Long term exposure to air pollution…. contributes to around 230 deaths (in Liverpool) per year. Everyone can be affected. Children, the elderly and those with heart or lung conditions… the most susceptible”. The Council recognizes this in their informative online site, which monitors 86 roadside locations across the city for nitrogen dioxide every month. Air pollution modelling aims to identify concentrations – hotspots – of air pollution from buses, HGVs, rail and shipping, and do something about it. The Government has identified six areas of A Roads in the city that exceed safe limits: The Strand, Islington (North and South bound, classed as two separate roads), Lime Street, Dale Street and Bowring Park by The Rocket. The car is the problem but who is going to get rid of their car? How could they? They’ve got to get to work; they have got to get the kids to school, and no, most of them can’t walk the kids there because they’ve got to get to work. Not every grandad can do it for them. The council have a nice video on their site showing kids from Mosspits School coming up with their ideas, “I told my mum to park further away from school so we can walk the rest of the way”. A generation of the environmentally aware and committed may be on the way. 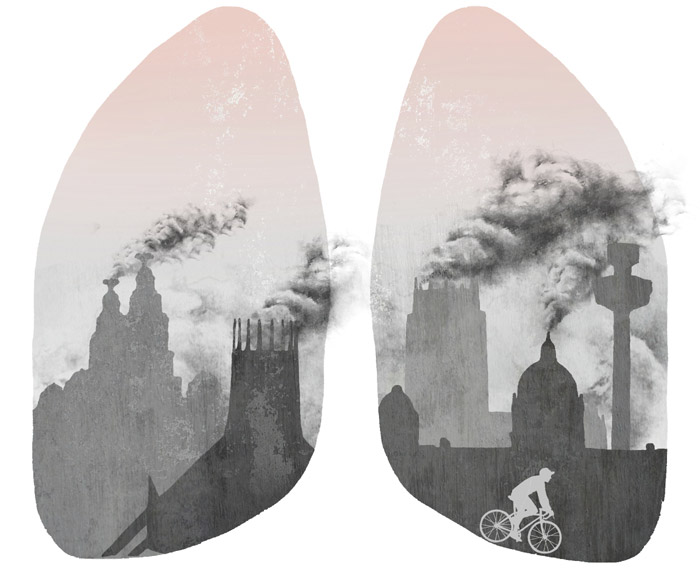 Meantime, the pre-Covid Council Connectivity Strategy for travelling around the city sustainably included creating a new public square outside Lime Street Station with walk and cycle routes past St. Georges Hall; planting more trees; a ‘Green Wall’ on St John’s Shopping Precinct; keeping traffic on the move along The Strand; replacing the current diesel bin lorries and encouraging Hackney drivers to ditch diesel, too. Short of a massive switch to renewable energy what can a cash strapped council facing a problem that needs a national and global response do? What can we do, they’re our kids? Breathe in, breathe out.

Previous Post: From DACEing* to FACING Up to the Climate Crisis
Next Post: Pedalling into the Future