Merseyside born filmmaker Harry Sherriff chats about his upcoming webseries Early Days, breaking into the film industry and the influences on his work.

Southport born filmmaker Harry Sherriff has quickly developed a reputation as a filmmaker firmly in the ascendant since he won funding for his debut short feature Hits Like A Girl in 2014. After securing funding from British Film Institute (BFI) in partnership with Creative England for the project Sherriff has been highly prolific, produced 12 short features in as many months.

Sherriff is currently developing his debut feature with Merseyside based arthouse company Red Union Films. Co-founded by author Kevin Sampson, the outfit were behind two Merseyside-set releases, Awaydays (2009) and The Violators (2016), the acclaimed directorial debut of best-selling author Helen Walsh.

The filmmaker’s next project sees Sherriff explore the medium of web series, with upcoming venture Early Days scheduled to appear online in late September. Funded by Liverpool Film Night at FACT, the storied event takes place at the Arts Foundation on 22nd November.

Starting with FACT then, why is Liverpool Film Night Important to you? ‘It showcases fresh Northern talent. It was always an aim of mine to be screened there so to have work there two years consecutively is a nice feeling’ Harry replies. ‘Liverpool is becoming a powerhouse in terms of film and TV. Long may it continue’.

What made you decide to make Early Days into a web series? ‘The format came first. I’ve wanted to make a web series for a long time. When I did the 12 shorts in 12 months there was a big part of me that regretted it didn’t follow the same characters although in hindsight I’m glad we didn’t. Stand-up comedian Jim Harkness who I wrote the show with obviously played a big part. We had made a short called Get Coffee that was unscripted that people seemed to like. It was our attempt at how (US comedian) Larry David does Curb Your Enthusiasm I guess or our take on it and we loved that experience. At the same time, I was on a scheme called the North West Talent Programme, which was funded by Creative England and FACT. At the end of the course they had a pitch competition to receive £1,500 in funding. About 30 filmmakers pitched and thankfully I won so it was nice timing’. 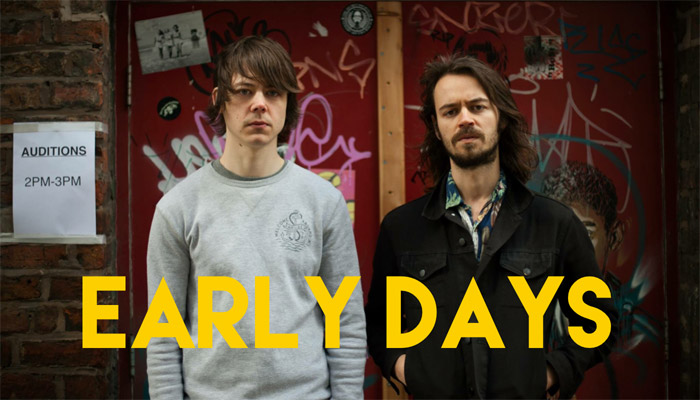 ‘The inspiration was to create something real and funny and put it online to see what people make of it’ Harry says of the decision to make a web series. ‘We’re definitely going to make more so Jim and I are hyped to hear where people think we can take it. Several web series have been bought in the last six months and this will increase. Just this week Apple and Facebook have announced how crucial video is to their future. We’re on the cusp of very exciting times. I’ll put this way, Facebook have said they’re willing to pay $10,000-$25,000 for ten-minute videos. Realistically someone out there is going to create the next Carpool Karaoke sell it to (Facebook founder Mark) Zuckerberg and ride off into the sunset’.

Something of a hallmark in Harry’s work, naturalistic dialogue, where the character could almost be the overheard conversations of passers-by features in many of his works. Why is this aspect of filmmaking important to you? ‘Dialogue is my favourite part of writing’ the director responds. ‘I love stylised dialogue writers like (West Wing creator) Aaron Sorkin (In Bruges (2008) writer) Martin McDonagh but with Get Coffee Jim and I were aiming for realism. Besides a few lines and knowing what the scenes were roughly about, the film wasn’t scripted at all. As an actor it’s exciting because it ups the creative freedom and as a director you know it’s going to look real’ Harry explains. ‘I think my process going forward is write a first draft and rewrite that off the back of great improvisations. There’s many schools of thought on this, some filmmakers give too much freedom and some don’t give enough. Both can end up being bland or coming across as try hard’.

While cinema takings have been strong in the UK this year, the ever-increasing popularity of On Demand streaming services and the decline in DVD sales have seen industry insiders suggest the film business is going through a sea-change. Do you see this happening presently? ‘I believe a sea change is happening’ Harry states. ‘Okja (2017) getting booed at Cannes was interesting (the cinema audience objected to the Netflix title card during the film’s premiere at the festival). I can only speak about what I’ve experienced first-hand and that it’s never been easier to make & distribute films. It’s a fact. If that doesn’t inspire and motivate people to make films then nothing will and they’re not filmmakers. The problem is everybody wants the money without the hard work. I believe as a filmmaker in 2017 you need to be your own everything. You need to be your own studio until someone comes along and is interested in you’.

Further to which do you think people watching films on phones and tablets is a bad thing, or like cinema buff Quentin Tarantino is a dilution of the art? ‘I think if you were to go back in time and tell Quentin that one day you’ll be able to film a movie on a device that would fit in your top pocket and also distribute it to millions of people in a matter of seconds you would have fried his tiny mind’ Harry says. ‘People don’t like change, especially purists like Tarantino and Christopher Nolan. They have an argument of course, am I ever going to watch a David Lean film on an iPhone? No of course not but dismissing where technology is taking us or dismissing Netflix seems too far the other way’. 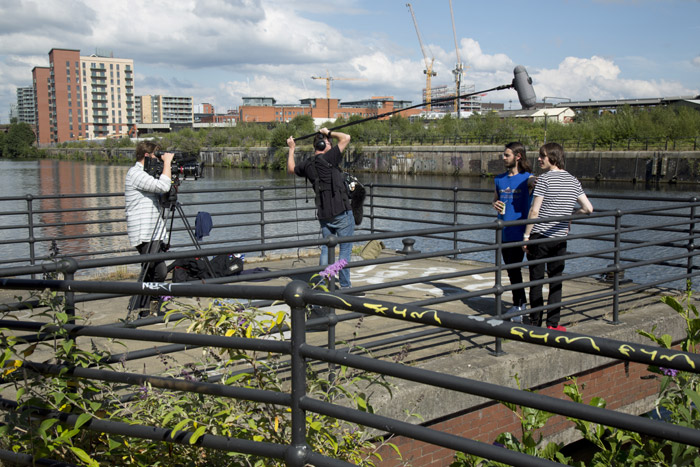 ‘Also what about the teenager in Ohio that’s picked up his iPhone and started shooting comedy sketches and putting them on Facebook?’ Harry offers. ‘For the first time they’re experiencing pure creative joy and getting positive feedback off their audience. What’s Quentin going to say to them? ‘Wait until you can shoot it on 35mm, kid’.

I like the fact I can go see Dunkirk (2017) in IMAX but then on a rainy day I can watch an episode of (US comedy-drama web series) Master of None in bed on my Macbook Air. The money people love an audience and an audience loves options. I do think owners of cinemas need to up their game. They’ve become very one dimensional, inpersonal venues’ Harry states. ‘Put it this way I went to Printworks (in central Manchester) last week and I caught myself thinking ‘This place could be ran by robots in 2020’. You’ve got a machine for your tickets and you could quite easily have a machine for the overpriced snacks. There needs to be a greater sense of community’.

With an impressive mini-catalogue to his name, Sherriff has been highly productive since Hits Like A Girl. Is it important for you to be so prolific? ‘I love making films and in my head I’m chasing greatness so it makes sense to try and do it as much as possible’ Harry replies. ‘Twelve shorts in 12 months came about because I had produced next to nothing the previous year. I’m playing the long game. Twelve shorts is nothing. Woody Allen does 12 features in 12 years, that’s what I aspire to!’ he states.

Given that filmmaking appears to be a difficult industry to break into, what advice would you give to filmmakers just starting out? ‘The obvious bad answer is make a lot of films. My advice to them would be figure out how to reverse engineer that’ the filmmaker suggests. ‘A director by their very nature has to direct something, they have to also direct people so you need people. Also, a big part of the job is making decisions but how can you make decisions if you don’t have super talented people bringing you options to consider? Twelve short films in a year is a good way to start but I was being a bit lazy. You should aim for 20. I’d also tell them to stop putting filmmakers on a pedestal’ Sherriff states. ‘I don’t care who you are, you were shit once. Even Kubrick’s first films were funded by his Dad’.

On the subject on inspirations, what filmmakers have turned your head recently?
‘I’m recommending Joanna Hogg’s Exhibition (2013) a lot at the moment. I’m in awe of it’.

Something that scores of filmmakers cut their teeth on early in their career, music videos have seen the stellar likes of David Fincher, Michael Gondry and Jonathan Glazer lend their talents to the medium. Have you been asked to shoot any music videos yet? ‘I’d love to work with (former Coral guitarist, now solo) Bill Ryder-Jones again but he’s busy being a talented singer-songwriter as well as music producer so I’m not sure when that’ll happen. I wanted to use one of his tracks for Early Days but in the end didn’t even bother asking. There’s a cool Argentinian musician called Andres Pomato I hope to work with. He travels all around the world busking. He recently moved to London and saved up enough money busking so he could record an EP in Abbey Road Studios. How can you not love that story?’ Sherriff enthuses.

A straightforward final enquiry then, what’s the best thing you’ve seen recently? ‘It’s not recent’ Harry states ‘But I think about (acclaimed Russian drama) Leviathan (2014) by Andrey Zvyagintsev like once a week’.