Globe Productions is a small production company that is based in The City of Liverpool College Arts Centre which is run by a group technicians and performers. 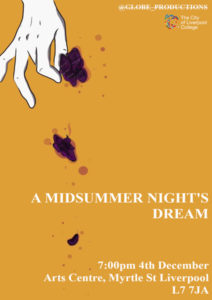 Drawing upon influences of Dadaism and Brechtian technique, alongside the devising methodologies of Joan Littlewood, they have conceived a contemporary adaptation of one of Shakespeare’s most acclaimed comedic works “A Midsummer Night’s Dream”.

A process of collaborative creation has enabled them to present to you their reimagined telling in which bevvys, bucket hats and Blur adorn the classic tale of bewildered lovers and novice playwrites.

Globe Productions formed last year as part of their HND Course at the college. Their contemporary adaptation of ‘A Midsummer Night’s Dream’ is the second performance that they have worked on, their previous being Philip Ridleys’ ‘Mercury Fur’. However, they are not the only production company based within the college.

Their sister company, the Rose Theatre Company, was formed at the same time who performed their first show ‘How To Disappear Completely And Never Be Found’ earlier this year and will be performing King Lear in December also at the Arts Centre.

If anyone would like tickets for this show (they are £5 each) or any more information, you can message their Instagram page @globe_productions or you can email them at globeproductions19@gmail.com.