There will be soup and bread available before the film. Pay as much as you can afford. 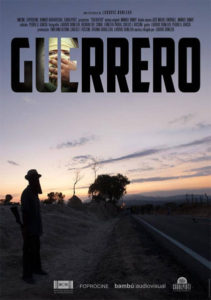 The documentary directed by Ludovic Bonleux follows three activists and organizers in the federal state of Guerrero in Mexico, in the time period just after the assassination of 6 people and the enforced disappearance of 43 students in September 2014. Guerrero is one of the poorest federal states of Mexico. Over the decades it has been the location of perseverant social and political organisation, which has in turn been met with fierce repression. In recent years, organized crime and the so-called ‘narco-state’ have inflicted brutal violence on those members of the population who stand up to them. Each of the three activists is involved in a different cause: community self-defence, the search for the remains of the forcibly disappeared, and a boycott of local elections. Guerrero follows them on their journey of struggle and of critical reflection. The film invites viewers to share into a reflection on what happens when things move in ways that individual activists did not foresee or suppport, on sacrifice, and on the challenges of loyalty in the context of a narco-state, of a disintegrating social fabric, and of repression so severe that resignation, withdrawal or the acceptance of defeat are not an option.

**Please note that this film contains images of human remains which some viewers might find disturbing.**

Workshop: Persistence, Solidarity and Autonomy: Social and Political Struggles and Movements in Mexico since 1968

This talk introduces social and political movements in Mexico that emerged since the early 1960s: why did they emerge, what were their struggles, how do they organize? How do they form alliances, with whom, and according to what principles? How do they and their sympathizers express their causes and leave testimony of their experiences? How do the State, corporate power and organized crime repress them? How do the movements resist repression?

We look at movements in the city and in the countryside, such as the student movement of 1968 and 1971, at rural guerrilla movements in the 1960s and 1970s, at the organizations of family members of victims of enforced disappearance, at several movements against electoral fraud, urban grassroots organization, activism against the mass murdering of women, Zapatista secret organising, the Zapatista Uprising and the process of autonomy of the indigenous communities, resistance to attacks on Free Speech and on investigative journalism, and at resistance to large infrastructure projects.

The events of this evening are dedicated to the memory of Juliette Doman.