Plastics have made our lives easier and are important to keeping many materials cheap, flexible, durable, and transparent. However, there’s a dark side to plastics: how do we properly dispose of them to avoid the plastic pollution that is taking over the oceans around the world and poses a risk to public health?

By Phylicia Leak
Images from Gradschools.com

Plastic Pollution in the Ocean: How to Stop It

As we rely on plastics more and more for computers, cell phones, and even modern medicine, it’s important that we also understand how to create and maintain proper and effective recycling techniques to reduce the current rate of plastic pollution both on land and in our oceans.

This is especially true in developing countries that may not have the recycling facilities needed as we use more plastic. Continue reading to discover how much plastic is in the ocean, how long it lasts for, and how we can reduce plastic pollution.

Plastic in the Ocean Facts

While it is difficult to tell exactly how much plastic is in the ocean, or how it gets there, some estimates say that about 20% of the trash in the ocean comes from ships and platforms that are offshore.

In addition, some studies have shown that 44% of all seabird species have plastic in and around their bodies. However, it’s nearly impossible to tell exactly how much plastic is in the oceans, especially because the size ranges from plastic bags and bottles to tiny microbeads and microplastics.

Recent Studies about Plastic Pollution in the Ocean

A study published in Science in 2010 estimated that plastic debris washing into the ocean from 192 coastal countries reached somewhere between 4.8 and 12.7 million metric tons in 2010.

Another study estimated that plastic caused about $13 billion in damages to marine ecosystems. However, they were quick to warn that the estimate was probably low because there is so much we don’t know about the issue.

How Much Plastic is in the Ocean?

There is no easy way to study how much plastic is in the ocean, especially because most plastic gets broken down to microplastics from the wind, currents, and UV rays. These microplastics may sink, though currently there is no way to tell.

For instance, if we were to use some of the latest filtering techniques, which scoops up about 120,000 gallons of water, we would only capture enough plastic pieces to fit in the palm of your hand. Plus, these nets would also remove a “by-catch” of microscopic plankton and other organisms that are important to the ocean ecosystem, which could cause more harm than good.

About 8% of the world’s oil use is from manufacturing plastics. In fact, the production of water bottles alone uses roughly 17 million barrels of oil a year. Plus, it takes three times the water to make a water bottle as it does to fill it.

How Much Plastic Enters the Ocean Every Year?

Some experts believe that there were 8 million metric tons of plastic that entered the ocean globally in 2010, which affects more than 600 species of marine animals. Since then, recycling efforts have increased, especially in developed nations. However, consumption has also increased, so the exact amount is difficult to judge.

Where Does Plastic Pollution in the Ocean Come From?

While it doesn’t really matter where plastic pollution comes from because it is a global problem, according to a recent study 90% of all the plastic that reaches the world’s oceans gets flushed through ten rivers:

Where Is Ocean Pollution the Worst?

In addition, the top 10 countries as sources of ocean’s plastic waste were:

The U.S. ranked 20th on the list, even though it has an advanced garbage collection system. The problem seems to stem from our dense coastal population and high consumption rates. The top 20 countries, including the U.S., were responsible for 83% of “mismanaged plastic” in the oceans combined. 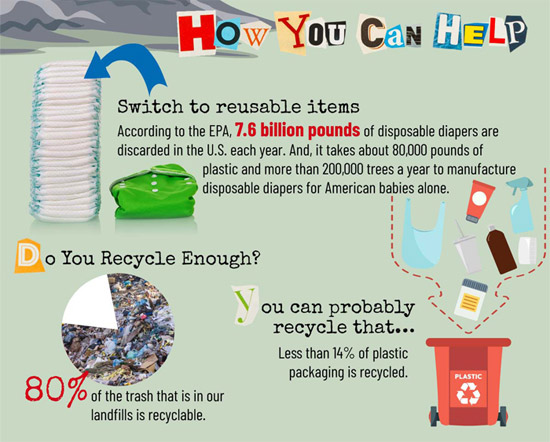 What Is the Great Pacific Garbage Patch?

Located between Hawaii and California, the Great Pacific Garbage Patch is an area where currents converge and collect plastic garbage, among other marine debris, at a much higher rate then found in other areas of the ocean.

According to some studies, there are as much as 1.8 trillion pieces of plastic, which accounts for more than 90% of the GPGP’s mass.

While these pieces may be easier for nonprofits and other agencies to scoop up, the inflow of garbage is far higher than the outflow. In addition, these larger pieces of plastic eventually are broken down by wind and water into smaller pieces of plastic, referred to as microplastics.

How Big Is the GPGP?

During a recent study using a fleet of boats and aircraft, researchers based in the Netherlands found that the Great Pacific Garbage Patch is now larger than France, Germany, and Spain combined, much bigger than previously feared.

This includes 80,000 tons of buoyant plastic, or roughly the weight of 500 jumbo jets and up to 16 times greater than the plastic mass uncovered there in previous studies.

However, according to the National Oceanic and Atmospheric Administration (NOAA), what many refer to as the Great Pacific Garbage Patch is actually just the Eastern Garbage Patch because marine debris concentrates in various regions of the North Pacific and not just one.

As a result, NOAA states that the size, content, and location of these garbage patches are difficult to predict because they are constantly changing due to currents, wind, and other factors.

According to some studies, plastic is killing more than 100,000 sea turtles and birds a year from ingestion and entanglement, though the exact number is hard to quantify.

While, roughly 8 million metric tons of plastic ends up in the oceans every year, what that actually means may be difficult to visualize. To put that in more understandable terms, that’s the equivalent of five grocery bags full of trash for every foot of coastline around the globe.

Plus, because it can take between 450 and 1,000 years for a plastic bottle and cap to biodegrade, these bottles are simply broken down into smaller pieces until they are eaten by fish, especially plankton, which are usually smaller than .01 of an inch. This is how plastics are ingested by smaller fish, their predators, and all the way up the food chain until they reach humans.

How Long Does Plastic Last For?

As you can see in the infographic, different types of plastic take different amounts of time to degrade, but in reality, plastic never degrades. Instead, it simply becomes smaller and smaller pieces. That means that the 4.9 billion tons of plastic that has been created since the 1950s and not recycled or burned is still around in some way, shape, or form.

If all that remaining plastic had been dropped in a landfill, it would fill 70 meters deep and taken up 57 square kilometers, or roughly the size of Manhattan.

Microplastics are small pieces of plastic, 5 millimeters long or less (or about the size of a sesame seed), and come from a variety of sources. Sometimes they come from larger pieces of plastic, such as bottles, that degrade into smaller and smaller pieces due to the wind, current, and UV rays.

Another source of microplastics are microbeads, which are tiny pieces of manufactured polyethylene plastic that are added as exfoliants to health and beauty products such as cleansers and toothpastes.

How Much Microplastic Is in the Ocean?

According to one recent study, each square kilometer of ocean has about 63,000 pieces of microplastic floating at the surface, with East Asian seas have levels 27% higher than average.

In fact, microplastics have been found in Mongolian mountain lakes and the Arctic Circle. And, according to another study, 25% of marine fish tested in markets in Indonesia and California were found to have plastic and textile fibers in their guts.

In 2018 a pilot whale was seen floating strangely off the coast of Southern Thailand. After veterinarians and conservationists gave the whale medicine and fluids it began vomiting up plastic bags. Soon later, the whale died. Inside its stomach, veterinarians found nearly 80 plastic bags weighing more than 17 pounds.

Plastic Pollution and Its Effect on You

There are different ways that plastic pollution become dangerous for humans. For instance, plastics contain many toxins, such as lead, cadmium, mercury, diethylhexyl phthalate (DHP), and health-bisphenol-A (BPA), among others.

All of these have been found in many fish in the ocean and can cause:

In addition, not only do the toxins in plastic affect the ocean, but they act like sponges, soaking up other toxins from outside sources before entering the ocean. As these chemicals are ingested by fish and other animals in the ocean, and eventually make their way up the food chain, humans ingest the contaminated fish.

However, the exact health effects of plastics on humans is almost impossible to determine because the problem of contamination is globally spread, leaving almost no unexposed subjects.

How Much Plastic Has Been Recycled?

Obviously, plastics aren’t perfect. However, they have helped raise the standard of living by keeping costs down for many products and have become an important part of our society.

Now, many innovators are trying different techniques of plastics, such as those made from plant crops instead of fossil fuels or others that are biodegradable. Even others are looking for ways to create a process that converts plastics back into the fossil fuels there were derived.

These techniques, and those not yet created, may change the future of plastics and the pollution currently impacting the world.

How Can You Help?

The best way for you to help reduce the plastic pollution in the ocean and in our landfills is to cut back on the amount of plastic you use. This includes not using straws, using a reusable water container instead of bottle water, and most importantly, recycle the plastic you use.