Photograph and article by Sandra Gibson

Even if you didn’t take the hint when you heard the first mowing machine of the year, you’ve got to believe it when you fall over the piles of bagged compost at the supermarket. It’s spring. For many people the spirit of spring is evoked by the daffodil emerging full voiced and yellow, surrounded by spears of fresh green, but for me it’s more about the transformation of the violet plants. I really identify with these scrunched up, frost-trodden survivors, which suddenly gain leaf-confidence and sprinkle purple flowers everywhere, unifying a garden with small touches of purple, providing contrast with the broader strokes of yellow from forsythia and daffodils. Violets are hardy survivors that grow without care or encouragement and then suddenly make an impact. True – it’s a more modest statement than the spring bulbs but I really appreciate them providing a resting place for the eye.

When I was a child, it was customary for violets to be given to mothers on Mother’s Day and there were also small chalky sweets, which didn’t taste like sweets – more like soap – and these were called Parma Violets. Mothers and grandmothers ate them to sweeten the breath. I was interested to learn that they have two claims to fame: they were Bond villain Ernst Stavro Blofeld’s favourite sweets and in a 2005 survey they were found to be the least popular confectionary among Millennials.

Nevertheless, violets have not been gastronomically unpopular in history. They were favoured for their medicinal qualities and used in sugary lozenges in the seventeenth century. During the eighteenth century crushed violet petals, rosewater and sugar were combined to make a type of confectionary called flower pastry and in Edwardian times violet flavoured chocolate and liquor were used to relieve sickness. 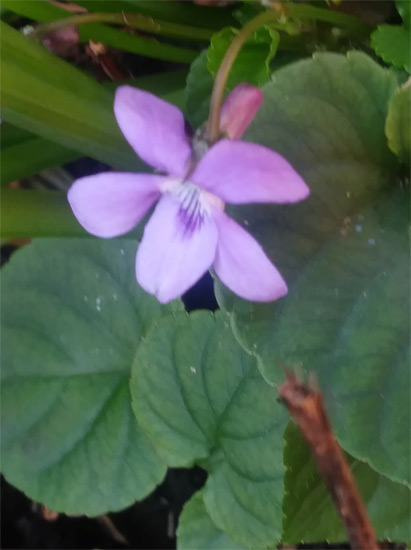 Like all flowers, violets have symbolic resonance. They are an emblem of the Greek goddess of love Aphrodite and her son Priapus, deity of gardens and generation, and also associated with lesbian love because of poetic fragments written by Sappho: “close by my side you put around yourself (many wreaths) of violets and roses”. Because of the connection with sex and love the violet is anomalously regarded as February’s flower because that’s when Valentine’s Day occurs: “Roses are red, violets are blue” etc. Although there are violets flowering now, in March, I have never seen them as early as February. But the way things are going …