The 1941 Andrews Sisters’ song, I’ll Be With You In Apple Blossom Time**, with its sibling harmonies, rhymed couplets, chiming bells and auspicious sunshine, combines the war-time yearning for a lovers’ reunion with the traditional seasonal rightness of a springtime wedding. There’s another apple-related song of the era: Don’t Sit Under The Apple Tree*** which, in spite of the Andrews Sisters’ harmonising style, expresses some apprehensive discord, some jealousy for an imagined rival:

So in these two war-time songs we get the conflicting feelings of longing and insecurity experienced by an exile, rehearsing the day when he will come marching home to reclaim his domestic territory. Idealised by popular song, of course, every garden seemed to have its own apple tree and it is easy to accept that soldiers would nostalgically remember its flowering beauty. Apple blossom is perfect for a bridal bouquet: the fresh pink and white of the unfolding flowers echo the virginal blushes the bride is expected to have and, moreover, contain the promise of round fruition in due time.

When I was a child, there was a Queen of the May ceremony, in which a mixture of lumpy and frail maidens danced round a phallus called a May Pole; it was all rather basic and earth-pounding and much girlier than worm-charming. May-time is associated with fertility for obvious reasons: there is a conspiracy of burgeoning light, rising sap, lengthening days and a halleluiah chorus every dawn. Then there is the poetic beauty of the blossoming trees, which in Japan are scrutinized for their optimum moment, at which point people take a picnic to view the gorgeous, though fleeting cherry blossom. 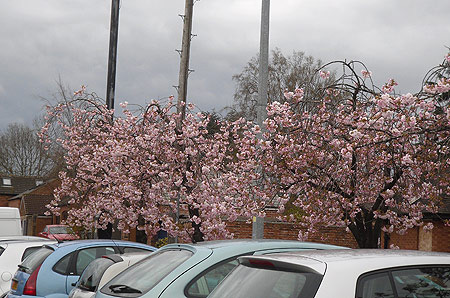 An apple is the perfect food-to-go. It doesn’t take up much space; it doesn’t squash and make a mess; you can eat it with the skin still on and it’s full of goodness. Before the days of avocado on toast and mango smoothies, the apple was considered a good enough treat to give to your favourite teacher. The apple has done very well to survive the bad publicity of the Garden of Eden days to the extent that a multi-national company worth $1.4 trillion**** uses it as its brand name.