You’re not hungry but you gotta nibble something. You don’t want to read but you need some bite sized info. Cue Amberley Publishing and their empire of Cheesy Wotsit style local history books to fill the gap. Available in other flavours covering transport, military, and sport history AP are knocking out these Cinderella books in every county and town in the land. 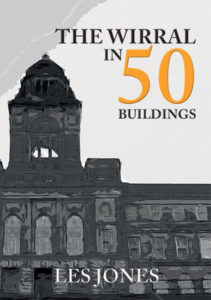 Coming at the rate of one every five minutes they must be getting gobbled up, I’m guessin’ by the fifty somethings and tourists wandering the streets between their cups of tea and a lemon slice.

‘The Wirral in 50 Buildings’ is Les Jones’ third outing for Amberley Publishing following ‘Wallasey, The Postcard Collection’ and ‘Lost Wirral’. Excellent decent sized colour pics taken from the correct angle on a sunny day. The accompanying write ups to each image regulation facts and figures of the 32” inside leg and 15 and a half collar kind, lightened by an informal style.

Accessible stuff tourists won’t mind or the 15 quid cost because they have a book that will last years with that vital ’dippability factor’, meaning they will pick it up again and again. Even if it is months or years between one ‘again’ and the next. A compliment not as back handed as it sounds since most books, barring classic novels and the Argos catalogue, are never ruffled again.

Les Jones’ ‘The Wirral in 50 Buildings’ continues the successful brand where the sheer optimism of art-deco Hoylake Station (No.27) and the curve of its cantilevered shelter inspires me to see it in-situ.

Hotfooting it to Central Station I am told its ‘bus replacement only’ from Hamilton Square. Fair enough. The bus twists and turns on a convoluted route taking in the train stations and I discover Birkenhead has long straight roads disappearing over a promising horizon – a lively imagination recalls Parisian boulevards but sans high-end shops or crowds. (Birkenhead’s finest like a lie in).

Ah, not as fanciful as it seems since Hamilton Square (No.10) “was built on a grand scale, as befitted a boom town with great ambitions…..the centre piece of a grid iron layout of wide boulevards, lined with large stone built villas.” Started in 1825 an unexpected recession shattered the vision.

Birkenhead? Grand vision? Cognitive dissonance surely, but ‘The Wirral in 50 Buildings’ tells us that things and life, no matter how unlikely we think now, were possible. Gregory Peck, Hollywood star on the red carpet at a Royal Gala in the Birkenhead Ritz in 1949, thousands filled the streets. Happened. Jumping back this side of the water, Wavertree Nook, well out of most people’s pocket today began as idyllic and communal council/social housing and like Hamilton Square was to be laid out for others until the First World War ended that dream, too.

Local history, eh? Not quite the Cinderella after all. Not that Les pushes the political or social effects and consequences of buildings or the built environment but the bones are there to riff off if you are that way inclined. There are enough Halls (Thurstaton, Irby, Hulme, Arrow), Churches (Saints Hilary, Andrew, George), town halls and a priory covering the 18 x 7 mile Wirral Peninsula for a good day out or just to leaf through.

I never got to see Hoylake Station, art deco or not. Somehow, the replacement bus took me past into the metropolis of West Kirby where I had been once and recognised a charity shop I moseyed in.

“Did the bus stop in Hoylake?”, I asked the old dear getting off in front of me holding a faithful mongrel who wore a padded coat and a look that said, ‘It’s not a bad life’.

Never mind. Got the book. Got the picture. Got a nail. Got a wall.