The first place to start is to ask why Ian Collard has chosen such a narrow window of Liverpool’s proud 300-year-old mercantile history as the subject of this 96 page immaculately presented volume. Certainly the period brings back personal memories for me of the hustle and bustle of wagons clogging up the quays of ships being loaded or emptying the contents of their subterranean holds, as cranes swung overhead and dockers bent their backs in unison with sailors from all over the globe in a world that was about to change. 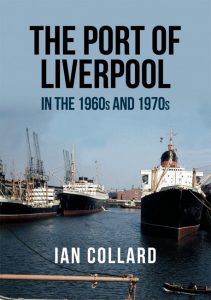 As to why, the answer boils down to a sea change in technological developments in both the shipping and aviation industries, which spelled the death knell for both tourist travel and cargo transport respectively. The author combines this demise with pictures of ships due to be broken up, their trade plying days over, but here saved to bring back memories when the Dock Road was King.

So what happened? The famous Princess Dock landing stage was closed in 1975, signalling the end of the passenger liner trade. Au Revoir then to the Empresses Canada, England, Britain and France and the likes of the Mauritania, Brittanic and Caledonia, as ominously the availability of cheaper and much faster air travel sealed their fate with the first Boeing 747 flight in 1970.

The biggest threat to a thriving mercantile waterfront was set in motion by the advent of the construction of Seaforth Container Base, which was opened in 1981, meaning the seven miles worth of other portals to the rest of the planet were gradually run down.

Farewell then the Gladstone, Brocklebank, Langton, Canada, Huskisson and Clarence Docks amongst others and trading companies importing or exporting goods to and from exotic destinations; Harrison Line to the West Indies and beyond, Elder Dempster to West Africa, the India Steamship Company, Clan Line to South Africa and Mauritius, Company Suo Americana De Vapores to Peru and Chile.

No list could be complete without mention of the Cunard freight sailings to New York, Boston and Halifax Nova Scotia. The author adds fascinating snapshot itineraries and manifests from who was doing business and where during these decades of transition.

The photographs also capture rare landmarks. The famous Clarence Dock Power Station now gone; a shot of the ‘denuded’ Three Graces at the Pier Head and a scene of the Mersey Ferry Landing Stage lovingly captured as the Seacombe Boat arrives. In the background the Cunard’s Parthia embarks passengers for New York.

The world was changing fast and rationalisation and selling on was increasingly the order of the day, and the fate of each vessel comes with a meticulously detailed description of it’s lineage and how it fared in working life; everything down to the tug fleet is covered by the author.

Typically the legend on page 29 reads……

The wheel turns and moves on. New big red cranes at Seaforth now await giant ships from China to unload their containers; cruise liners frequent the Landing Stage once more.

For all that Collard’s book is a poignant reminder of the industry and work effort of a lost era and is a valuable, if niche, addition to the continuing historical record.