Within its 96 pages Speke History Tour predominantly contains photographs and illustrations.
Many of the archive images are juxtaposed with contemporary pictures of similar locations. 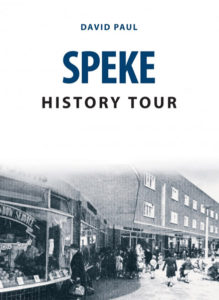 This is particularly poignant in relation to Evans Medical Supplies, which is based at the top of Speke Boulevard, Central Parade Shopping Centre, the road from Speke to Hale – the latter adjoins Speke – and Hale War Memorial.

Although I live only two miles from Speke, similar to Woolton Village, of which I recently reviewed Woolton History Tour, published by Amberley Publishing, I must confess I seldom visit Speke.

However I used to as a child, frequently visiting Oglet Beach, which borders on the River Mersey.

I was also a regular visitor to the famous Speke Hall. which is adjacent to the former site of Liverpool Airport. It has moved to another location in Speke and is now called Liverpool John Lennon Airport.

I never tired in my younger days of visiting Speke Hall, built in 1530, given its multitude of picturesque rooms, corridors and hallways, not to mention its scenic gardens. It is a Grade I listed building.

I was also a regular visitor as a young man to the Childe of Hale pub. it is named after John Middleton, who died in 1623. He was apparently over nine feet tall! The book includes an image of his statue.