“The ritual of voting involves voters seeing information, hearing debates and discussing points of view before deciding how to vote. What does the process of persuasion look like in the digital era where online opinion formers exert anonymous influence? The population is now exposed to a battery of coverage, but appear to be less powerful and more unhappy than ever.”

Nina became interested in how political messaging impacts the public when she was a candidate in local elections in 2004 and 2005, and again as press officer for a parliamentary candidate in 2015. She saw the change between communications either being delivered by hand, or happening face to face on the doorstep, to social media being used to message voters. But now all that has changed. With evidence that online platforms are a vehicle for paid influencers, Nina is left wondering if the people – the voters, have taken decisions, or if there is something going on, that we can’t quite see.

Nina Edge has done 62 felt pen drawings that look at how digital media is impacting democracy and communication. It is a very timely show as debating, influencing, party politics, voting and data surveillance are so prevalent right now. Our data is also being sold or mined by all sorts of entities to influence the future. As someone who spends a lot of time in the digital world especially social media I have noticed a massive change in the last few years. People have realised just how powerful these platforms are and some people are certainly making the most of that. They have even been used to start ‘Revolutions’..came in very useful in Iran and Egypt.. 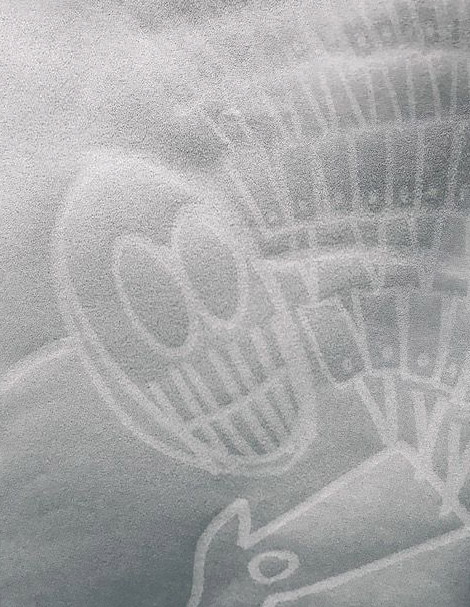 Nina’s drawings are bold and stylised, punchy graphics. Simplistic with very few strokes but conveying very strong feelings. They are intense and powerful, quite menacing! Mainly black on white with a small selection in white on the same white paper. The white ones are my favourites and were also the favourites of someone else in the space. I especially liked the figure clutching lots of phones..’BOTS’.

Bot’s are used more and more by some people and organisations to increase their reach. In China people actually work doing this in sweatshop type setups with banks of mobile phones covering the walls. The bot’s are becoming more and more intelligent and will actually have ‘conversations’ with you!!. You are actually communicating with a megabyte.

Seeing all the drawings together is recommended as there are so many to absorb. Each image stands alone too. The exhibition literally bombards us with the intense cyber world we have created…for better.. or worse. 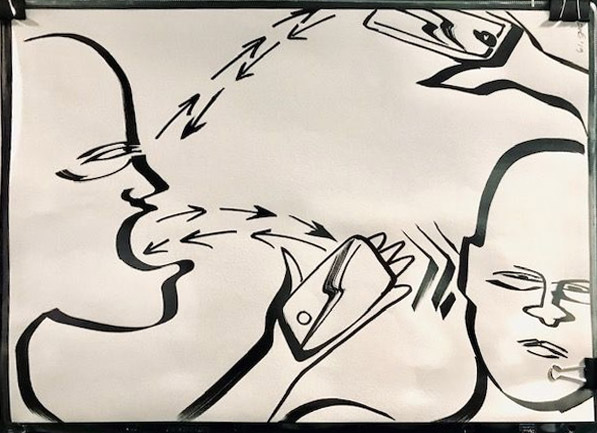