The punk rock phenomena comes to the sedate setting of the Picton Rooms situated neatly inside the neoclassical pillars, it was probably erected some time in the Victorian period, possibly to house imperialist loot or relics from the arcane past .

In many ways some people can look at punk in the same way, something that happened in the dim and distant past, but this exhibition among this neoclassical facade attempts to try bring the punk phenomena alive.

The staff curators have managed to amass a amazing treasure trove of punk memorabilia probably not seen out of London. Much of the archival collection is on loan from the British Library.

Helpfully it starts in chronological order, with the situationist texts which inspired Malcolm Mclaren to assemble punk rock. beginning with a rather inspiring large format copy of king mob echo, the English situationist magazine, which was inspired by the original Situationists based in France. Further on we have copies of early Patti Smith albums which were originally live bootlegs. Alongside that in the American section, we will say, is punk the first American magazine dedicated to the new scene. Lou Reed from the Velvet Underground graces the cover and, yes you guessed it, that’s where the phrase punk came from.

Moving along we have the first contract signed for Eric’s club by the Sex Pistols getting the princely sum of £200 pounds. not bad I suppose. Wish I could get that now for playing gigs rather than nowt

My favorite piece of the exhibition is the Jamie Reid promotional magazine for the ill-fated Sex Pistols tour in 1977. Its graphic content is brilliant and its cut up format is still being copied today. Also featured, as part of the British punk rock scene, is the bondage clothes and fetish T-shirts as worn by the various punk bands at the time. 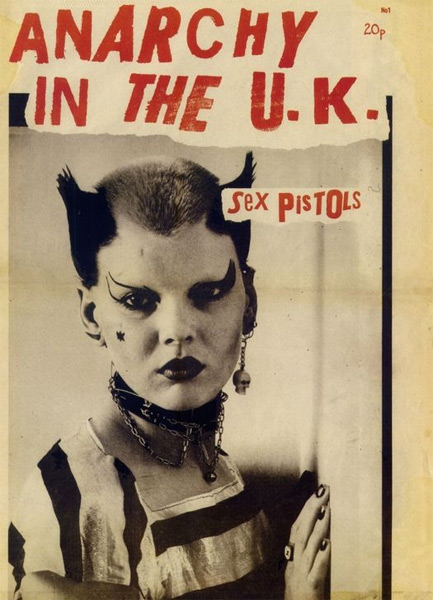 The final section features the graphic artwork of the singles cover. Punk would revive the Idea of singles with picture covers similar to the singles that were released in the sixties.

Punk would use this idea to great effect, one being modern, but looking back to a time when the music really mattered. The art of pop itself.

Many would DIY the covers themselves, partly as a snub to the ever present slick promotional photography being used in the record industry at the time, but also a repositioning of how records should look in this new era.

In this section we have John Peel’s original copy of Teenage Kicks by the Belfast group The Undertones, He championed the song on his radio show, playing it constantly. He would subsequently admit it was one of his favorite songs.

It’s a slice of pure pop but with punk energy, as I mentioned before, Seen in context now punk brought the pop song back in a time where the market was saturated by album-based groups making lengthy concept albums.

Rock was becoming more adult-orientated and punk looked back to the sixties as an inspiration. Mixing the old and the new punk managed the feat of putting together the avant-garde with bubblegum pop to create new music.

So, summing it up as an old punk rocker, is this just a trip down memory lane. Is this what punk was about, its face fixed firmly to the future so as to destroy the past.

Well, as we have previously discussed in the article, punk rock was about the past as much as the future. it could be seen as postmodern in terms of its plurality taking various elements of a disintegrated past and piecing it together or perhaps ripping it apart again, who knows.

I think the strength of this exhibition is that it seeks to explore the aspects of the strange otherness of the punk rock phenomena, the pieces taken from its inception rather than the tawdry rehash it eventually became.

Looking at the photographs and graphics now, they have a otherworldly quality about them, something that impressed me the first time around. The curators have caught that which went on to inspire a generation and beyond.