The ADP (Aftermath Dislocation Principle) Riot Tour is currently taking place in The Florrie in the heart of Toxteth. The exhibit is within a heavily graffitied shipping container. When I was there people where adding their mark to it with Sharpies, spray paints and stencils. Around the outside are a number of peep-holes that allow you to gaze inside. Inside contains a huge diorama of an area devastated by rioting. One end shows an urban metropolis and it slowly merges into a rural landscape. All smashed up and swathed in police.

It looks like a demented railway set. When you look closely there is so much detail. Hundreds of tiny police officers benignly stand around amidst scenes of chaos, illuminated by numerous blue flashing lights and tiny street lamps. When you look close you can see shops smashed up, bus stops in pieces, tiny flipped over cars, graffiti adorned on the tiny walls and the remnants of a wicker man burning. Despite the violence there is not a civilian in sight. 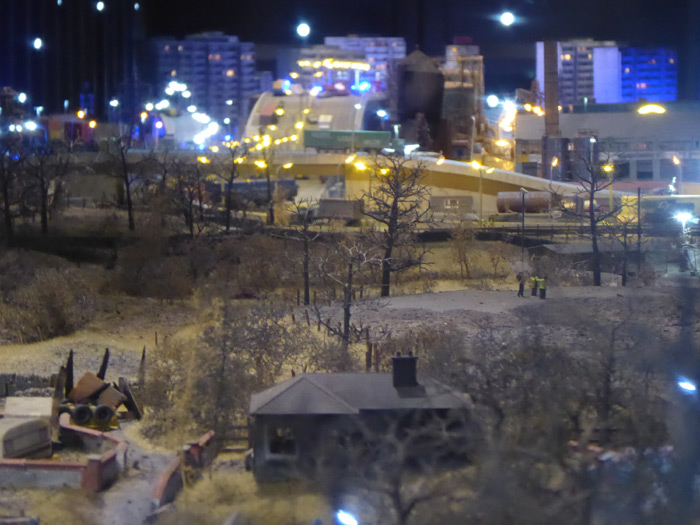 The literature stated that the scene is set in the not too distant future in an area of Bedfordshire. The impetus behind the unrest remaining a mystery.

It is part of the Riot Tour and over the next few months it is being planted in areas that have been the setting of famous British riots in the past. It was originally exhibited at Banksy’s Dismaland and has been on the move ever since.

It is an unusual and unique exhibit and I thoroughly enjoyed going down to see it. It is reminiscent of the Chapman brothers’ tiny Nazi dioramas and contains the same sort of dark humour. The peep-holes make you feel as though you are completely immersed in the tiny dystopian world. You can then join in with the anarchy by defacing its container. 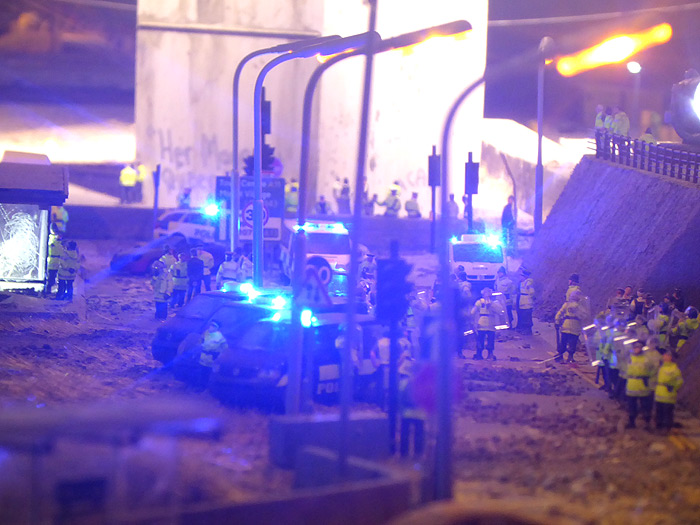 The rest of the Florrie is also hosting a variety of riot themed exhibits. On show are a number of photographs taken during the Toxteth riots in 1981 next to a political stamp collection.

There are also a number of pieces from local artists, including portraits of Ricky Tomlinson that he sat for and a selection of frantic dioramas from local kids. One of the guides told me that this is a part of a drive to transform the Florrie into an arts hub by promoting local talents.

The exhibition is only on for a few days before it continues on its journey around the country and it is well worth the visit.