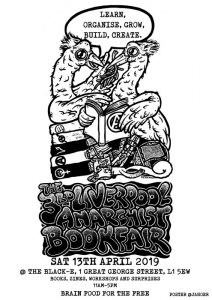 It will include stalls, workshops and a vegan cafe.
Free entry (donations towards events costs are welcome).

Here are all the stalls confirmed so far.

AK Press – AK Press is a worker-run collective that publishes and distributes radical books, visual and audio media, and other mind-altering material. – https://www.akuk.com/

Angry Workers – There’s a lot of people out there despairing – hoping for struggles for a better world, but feeling isolated and unsure of where to focus their political action. We think we have to dig in and reach out, grow roots and branches, mix and mingle in the daily grind, while keeping a hot heart and cool head, looking forward… – https://angryworkersworld.wordpress.com/

Banned In Braille – Banned in Braille is a cheap consciousness raising mag from Liverpool, with satire, news, puzzles and features about potentially anything. Includes the famous and controversial ‘Delta Adventures’ cartoon strip which explores what can happen when a minicab company becomes too powerful – even to the point where the physical laws of the universe can no longer be trusted.

Books Beyond Bars – Books Beyond Bars UK is a collective of volunteers who send books and other educational materials, free of charge, to incarcerated LGBTQIA+ people across the United Kingdom. – https://beyond-bars.org/

Chav Solidarity – D Hunter is an ageing chav, whose first 25 years depended upon the informal economy including sex work, robbing, and dealing. For the last 12 years he has been an anti-capitalist motivated community organiser and spent too much time watching football. He is currently flogging a book about himself, poverty and anarchism, whilst finishing his first crime fiction novel. He pays his bills by working as a mental health support worker. He thinks everyone should stop recycling until they’ve collectivised and/or redistributed all their current and future economic resources – https://www.chavsolidarity.com/

Citizens Of The Wrong Type – This booklet examines the history of governments forcibly and coercively sterilising their populations and goes on to uncover examples of other abusive medical and experimental practices performed on unwilling and unknowing people by the State. As the title suggests, it questions whether citizenship really means anything to those in power, and indeed who (if anyone) they regard as ‘their own people’. It then goes on to make a comparison with the outrages inflicted on animals, which are justified by those responsible in similarly dubious terms to those used for the abuse of humans, and concludes that we would be wise to be extremely sceptical of any claims that the powers that be are acting in our interests, unless we have real proof of this, and should not place our trust in them too readily, lest we fall victim ourselves. – https://www.activedistributionshop.org/shop/books/3296-citizens-of-the-wrong-type.html

The Cunningham Amendment – the longest surviving Anarchist journal in the UK – Full colour. Letterpress. Emphasis on art and entertainment. Advocates cunning and imagination. Consistently cautions against individualism and Marxism.

Earth First! – The general principles behind Earth First! are non-hierarchical organisation and the use of direct action to confront, stop and eventually reverse the forces that are responsible for the destruction of the Earth and its inhabitants. EF! is not a cohesive group or campaign, but a convenient banner for people who share similar philosophies to work under – https://earthfirst.org.uk/actionreports/whatisef

Footprint – We are a small ecologically minded printers based in Leeds. We print booklets, zines, leaflets, stickers, newsletters, fliers, books, CD wallets and that sort of gubbins. We are a workers co-operative, which means our business is owned by the workers. As we have no bosses we run it as we want, doing interesting jobs for interesting people. – http://www.footprinters.co.uk/

Haymarket Books – Haymarket Books is an independent, non-profit publisher of radical political literature. We strive to make our books an organic part of movements for social and economic justice, and to contribute to an engaged, critical, and internationalist left – https://www.haymarketbooks.org/

Linda Wall – Linda spent over four years collecting remarkable, distinctive music from every country in the world, and has written Around the World in 575 Songs, a four book series and companion website. – https://aroundtheworldin575songs.com/

Liverpool Hunt Saboteurs – Hunting with hounds was banned in England & Wales in 2005, however most hunts continue much as they did before. The police rarely help enforce the Hunting Act, due to a combination of ignorance on hunting techniques and interpretation of the law, and bias towards those who hunt and against those who try to stop it. In theory hunting with hounds is a thing of the past but in practice countless animals are pursued and ripped to pieces by hunts in the UK every week. Liverpool hunt saboteurs have experience of using non-violent direct action tactics to save the lives of thousands of hunted animals every season – https://lpoolhuntsabs.wordpress.com/

New Escapologist – Originally a small-press magazine run between 2007 and 2017, New Escapologist continues as an essay series, a long-established blog, and a column in the Idler. We look at the exit strategies from those demeaning day jobs, and celebrate the ‘flight’ part of ‘fight or flight’. We don’t think it’s shameful to want time to read library books, laze around, throw parties, go for walks, pursue our own creative projects or (heaven forbid) better ourselves. We also refute the notion that being a successful worker-consumer is the height of it all. – http://newescapologist.co.uk/

One Way Ticket To Cubesville – “Counter culture’s favourite toilet-read. Anarchy, absurdity and DIY music from this long-running punkzine” plus a selection of vegan guides and zines. – http://ticket-to-cubesville.blogspot.co.uk/

Pluto Press & Left Book Club – Pluto Press is a radical political publishing house. Founded in 1969, we are one of Britain’s oldest radical publishers, but our focus remains making timely interventions in contemporary struggles. We proudly identify as anti-capitalist, internationalist and politically independent. The Left Book Club series revives the ethos of the original Left Book Club active in the UK during the 1930s and 1940s. Tackling the destruction of the welfare state, the housing crisis, radical history, music and revolt amongst many other ideas, each book is chosen to uncover and explore the myriad issues we face today, and to bring us together through reading and debate. ” – https://www.plutobooks.com/pluto-series/left-book-club/

PM Press – PM Press was founded at the end of 2007 by a small collection of folks with decades of publishing, media, and organizing experience. PM Press co-conspirators have published and distributed hundreds of books, pamphlets, CDs, and DVDs. – https://pmpress.org.uk/

Radical Routes – Radical Routes is a network of radical co-ops whose members are committed to working for positive social change. The network is made up mainly of housing co-ops of various sizes, a few workers co-ops and a couple of social centres. – http://www.radicalroutes.org.uk/

Seeds For Change – We live in a world in which humans and ecosystems are exploited for the sake of greed and power, and to create real change, we need to come together to confront injustice and build alternatives. Seeds for Change exists to support groups who are trying to do just that, and who share our core values of equality, freedom and solidarity – for human beings, other animals and the ecosystems we are part of. We are a workers’ co-op of experienced campaigners and co-operators, offering training, facilitation, online resources and other support for campaigns, community groups and co-operatives. – https://www.seedsforchange.org.uk/

Smash IPP – a collective of people fighting for the release of IPP (Imprisonment for Public Protection) prisoners, and the abolition of life licenses. Many of us have friends and family who are locked up with indefinite sentences, and we are painfully aware of the effect that this uncertainty can have on the health of our loved ones and our families and communities – http://smashipp.noflag.org.uk/

Unoffensive Animal – Unoffensive Animal was born out of the necessity to inspire activists. After complaining about how the radical left has an incline to disregard veganism and qualify it as classist and colonialist, and after feeling completely disheartened by animal rights activists disregarding human issues, we decided to create a media outlet able to bring both sides and to help radicalise activists. Unoffensive Animal is an anarchist collective. We are non-profit and strongly anti capitalist. We are queer and/or queer allies. We are antifascists. We are vegan, animal liberationists and we have even been called forest “jihadis”. We stand against animal exploitation and against human exploitation. We oppose racism, bigotry and nationalism. We believe in direct action, but we also believe in diversity of tactics. We know that human liberation is animal liberation and that animal liberation will never happen under capitalism. – https://www.unoffensiveanimal.com/