Tom Bottle expounds the virtues of wood as a building material, and its potential to replace concrete and help reduce the construction industry’s huge environmental impacts.

Concrete and steel: they built modern life. Where would we be without them? The UN says 66% of people will live in cities by 2050. That’s a lot of houses and buildings.

The trouble is the way we build now is unsustainable. We can’t go on using energy and resources that won’t last and can’t be replaced.

The construction industry uses 40% of the world’s energy – mostly in excavating raw materials, a lot of which go to make concrete. Concrete gives off massive amounts of CO2 emissions, takes staggering amounts of water to make, and can’t easily be used again.

The wonder building material of the 20th century is now one of the most environmentally destructive.

There is a natural material1 that can match – or exceed – the performance of both concrete and steel; it’s stronger2, just as versatile, easy to produce, fire-resistant, recyclable, and sustainable. Plus, it looks good and is much lower in carbon emissions. 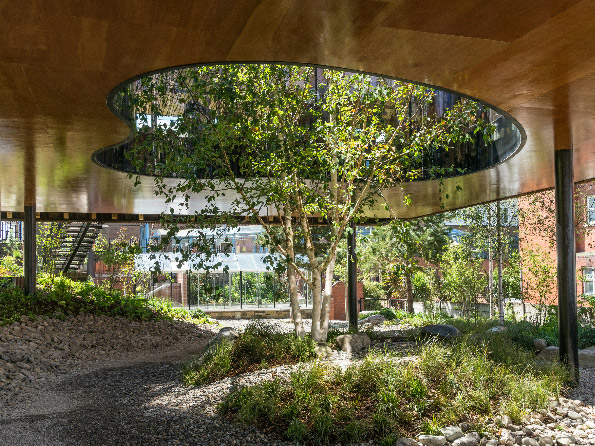 So, how many timber high-rises have you seen lately?

Mjostarnet, Norway, at 18 stories (85m) is the tallest timber building in the world. It is made entirely from cross-laminated timber (CLT), a revolutionary super strength material which allows architects to build high, using sustainable wood.

Think mega plywood: thicker, wider, longer, to make walls, floors, and rooftops. Research and innovation in 1990s Germany and Austria generated a change of attitude in new construction and design. Using the latest digital technologies CLT consists of boards glued criss-cross on top of each other and high pressure bonded. Buildings are precision made in the factory and assembled on site. It is estimated that 90% of the strength of CLT comes from its fitting and joints. It is cleaner, quicker, and more sustainable than conventional building methods. CLT is known as Engineered Timber.

A few years ago, Hackney Council narrowly failed to pass legislation prioritising sustainable timber like CLT in its building programme. A mixed-use 10 story development in the borough, Dalston Works, weighs one fifth of a comparable concrete structure, saving carbon emissions in two ways: less concrete is used, and timber retains carbon. The building used 2,325 trees (around 3 trees per person living and working there) yet in Austrian and German forests enough timber is grown in 1 hour to produce the CLT used in Dalston.

Holistic design3 and practice ensures timber is certified as sustainable from forest to factory to site and beyond the life of the building: recycling is built-in. Pre-made precision fitting timbers pre-empt heat loss, the biggest waste of energy in most homes; sawdust and off-cuts are not wasted but processed into biomass to run factory equipment, kilns, and as fuel for local communities. Transporting pre-made CLT from a factory drastically reduces the number of lorries off-loading on site – the Dalston project required 111 deliveries where an equivalent concrete frame would have taken an estimated 800.

In fire it is smoke which often kills, moving from room to room through gaps between different materials. CLT, built by experienced hands, can be completely airtight. A fire would have to burn for 2 hours to consume a 100mm CLT wall, mimicking how tree bark protects by smouldering4, not burning.

The health benefits of sustainable timbers are not just environmental, they are personal. In wood there is hope5 and warmth and its use in Maggie’s Centre, Oldham is designed to bring emotional support and lift the spirits in those affected by cancer. People have confirmed the positive effects.

If Engineered Timbers like CLT are so good, why aren’t they widely used?

The timber industry does not speak with one voice. It is up against a default position6 among trades and professions in construction: concrete is king. Overcoming this attitude is the big hurdle.

As one professional at RIBA’s Forest of Fabrication Exhibition* (a sustainable timber building exhibition which ran in Liverpool earlier this year) said, “We were taught to lust after exposed concrete”. Acknowledging that now the environmental impact of materials like concrete is known, a new ‘thinking’ and radical design ethic is needed.

This has been the story of one alternative building material and the sustainable world it could help create. More diverse trees and forests are needed but long, uninterrupted spans are difficult to achieve, and the polyurethane glues used could compromise recycling.

Not the perfect environmental story7 then, but how long can we go on with the one we’ve got?

Larry Carton, a Civil Engineer gives his professional response to the 7 referenced points in this article below