Image above: “We can handle bars & cycle paths. But we can’t handle cars & psychopaths!”

Katy Brown reports on the progress of the Emergency Active Travel scheme on Merseyside, with help from Don Naylor of Liverpool Friends of the Earth, as the group tries to ensure the changes are brought in ready for the long haul.

Liverpool City Council has announced a 65-mile network of temporary cycle lanes as part of the city’s post-lockdown plans. It says it will pay for this with a £4m fund, using money from the council’s highways investment programme and via the Active Travel Grant established by the Department of Transport. A further £100,000 is identified for investment in upgrading infrastructure for Liverpool’s existing CityBike hire scheme:1 23km of this is due to be completed this summer.

The cycle network involves 7 key routes, with the first branch covering two miles already established on West Derby Road, one of the main arteries into the city centre from the east.2

The seven Liverpool cycling routes are: 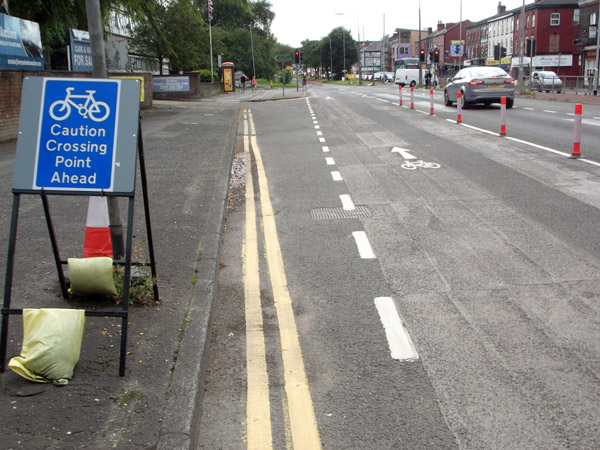 West Derby’s pop-up cycle lane, formerly cyclists had to run the gauntlet of sharing the route with vehicles of all sizes, now they get a whole lane to themselves, though not everybody is enthusiastic. Credit: Katy Brown

Many people have been delighted at both the emergence of pop-up cycle lanes around the city, and the pedestrianised areas that have sprung up in and around the city centre – some positive news stories in these otherwise worrying and uncertain times. 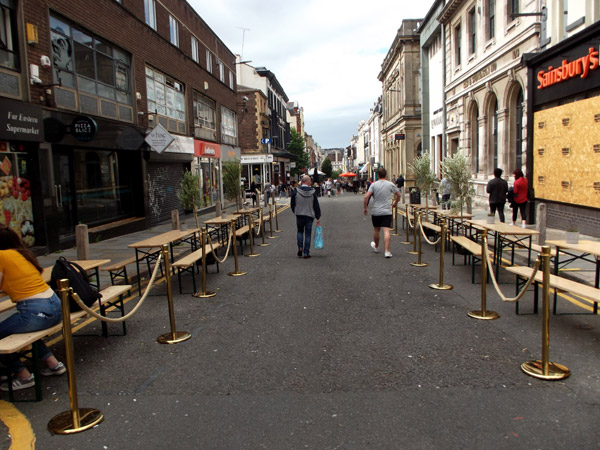 Not everyone is happy with the scheme, however. There are recent reports of a proposed ‘blockade’ of the West Derby Road pop-up cycle lane, which has the support of Tuebrook councillor Steve Radford, who says he had been inundated with complaints since the cycle lane along West Derby Road was implemented earlier this year. He says residents complain that the route is underused and takes up too much space on the road, causing severe congestion; that aspects of the scheme have made conditions difficult or dangerous for pedestrians and bus users and that residents attempting to voice concerns have been treated with contempt by the council’s highways department. Instead of being listened to, they are repeatedly referred back to a list of Frequently Asked Questions about the scheme.3

The Government stipulated that Emergency Active Travel Fund schemes had to be started within four weeks and completed within eight weeks of the funding being approved, meaning it was not possible to carry out consultation as per usual procedures.4 The Department for Transport’s guidance on EATF bids also says that ‘Schemes that do not meaningfully alter the status quo on the road will not be funded’

However, cyclists who use the routes have spoken in its favour. On June 25th, a 44 strong ‘critical mass’ climate change cycle ride was organised by a coalition of local groups including Extinction Rebellion, Friends of the Earth and Greenpeace, in support of the cycle lanes. One cyclist on the ride spoke enthusiastically of the newfound freedom provided by the extra road space for cyclists: ‘I’m so grateful for the pop-up cycle lane scheme. I’m a care worker so have had to go out to work during the whole of lock down. I’ve been avoiding public transport and cycling instead, as per the guidance since the Covid-19 situation turned our lives upside down, which has caused me a lot of stress and anxiety. The cycle lanes have been a great tonic to this, providing a much more pleasant, safer and less stressful experience of cycling on the roads via the most direct routes when I’m in a hurry to get to and from work – thank you!’ 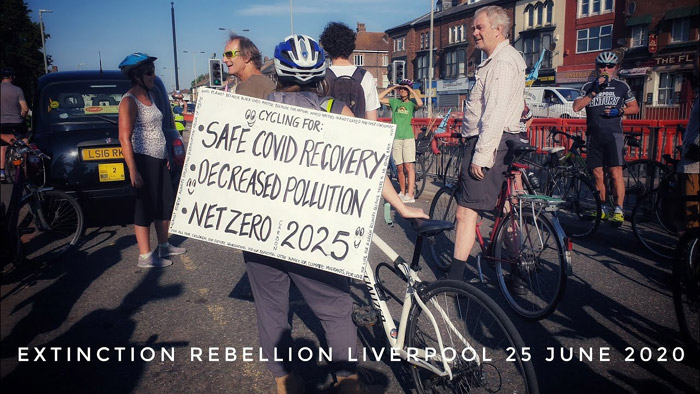 Liverpool FoE has been working with other community groups to help raise the profile of Emergency Active Travel measures across the Liverpool City Region as Don Naylor of Liverpool Friends of the Earth explains:

One aspect of this has been to encourage all six Councils to provide a ‘Liveable Streets’ on-line interactive platform using ‘Commonplace’ (www.commonplace.is), thereby enabling residents to share ideas about making streets more people-friendly, using COVID-related social distancing considerations as a starting point. At the time of writing, five of the Councils have now provided this facility, with most ‘Commonplaces’ being open until the end of August. It’s also understood that at least some Councils are regularly reviewing people’s comments and using them to improve Emergency Active Travel Fund (EATF) proposals being put forward to the Combined Authority and, subsequently, to the Department for Transport (DfT).

Nationally, there is a mixed picture emerging around those EATF measures, typically ‘pop-up’ cycle lanes, that have already been put in on the ground. Some Councils, faced with ‘backlash’ from vocal sections of their communities, have quickly lost confidence, and resorted to removing what had just been installed. There’s more than a suspicion that such a sequence of events will have taken place without a fully informed community conversation having taken place, thereby excluding all aspects of the interventions to be considered. It may be all too easy, without considering objective evidence, for a view that ‘pop-up bike lanes cause congestion and are bad for local businesses’ to quickly become the mostly loudly vocalised and seemingly dominant one.

More locally, it’s consequently important that related issues are properly considered in as inclusive a way as can be achieved, with as many related factors as possible being put on the table. Funding from the DfT has to be spent within a short timescale; at the same time, should people not be able to consider if they’re happy with the previous status quo of streets, full of cars, being no-go areas for some of society’s most vulnerable, and being a major source of poor air quality? Liverpool FoE and others, whilst being aware that ‘Phase 1 pop-ups’ may be less than perfect, would certainly want this wider conversation to happen, before any retrograde decisions are made within the City Region. We would want this necessary aspect of ‘doing things differently’ to be given a fair chance.

To have your say on what happens in your area you can feedback to your local council via your relevant ‘Liveable Streets’ platform below, unless you live in Halton, which unfortunately hasn’t provide its residents with this option.

Most of these are open for comment until the end of August.

And of course, if you have a bike – get out on it and start using the cycle lanes as they appear!

Other projects already underway which are part of the scheme include: 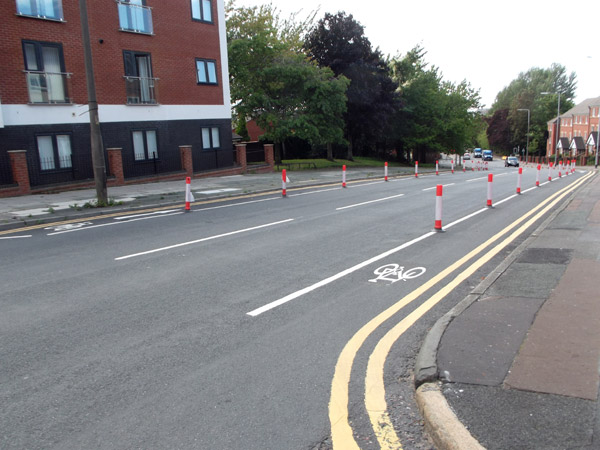 Some existing cycle routes have been reinforced. Credit: Katy Brown

Perhaps the most exciting thing about the pop-up cycle lanes has been the speed with which some of them have sprung up. While it seems there may be some problems that need ironing out, a key lesson we can all learn from the scheme is how rapidly change can be achieved if the political will is there, and that solutions don’t always have to be complicated, or require huge amounts of money or technical advances. Air pollution is linked to up to 36,000 deaths in England every year and costs society more than £20 billion. Two of the most dangerous pollutants are nitrogen dioxide (NO2) and particulate matter (PM2.5).5 80% of nitrogen dioxide pollution comes from vehicles and 75% of PM2.5 comes from traffic and non-road vehicles. Yet it seems that part of the solution to such a huge problem is as simple as some road paint, some traffic cones, and a desire to do things differently.6